Take the Taconic State Parkway north to the exit for US 44 (Poughkeepsie, Millbrook) (this exit is about 52 miles north of the southern terminus of the Taconic State Parkway in Valhalla, N.Y.). At the bottom of the ramp, turn right onto US 44 East and continue for 0.7 mile to NY 82. Proceed north on NY 82 for about 15 miles to Pine Plains. About 0.2 mile after passing the small green sign marking the town line of Pine Plains, turn left at a firehouse onto Lake Road. In 1.4 miles, you’ll pass a sign on the left for the Thompson Pond Nature Preserve, and in another 0.2 mile, at a curve in the road, you’ll pass another sign for the preserve on the left. Continue ahead for 0.1 mile to a parking turnout on the right side of the road, with a signpost for the “Lake Road Trailhead” and a sign for the Thompson Pond Nature Preserve on the left side of the road.

The trails up Stissing Mountain from Lake Road are not blazed, but they are quite obvious and can be easily 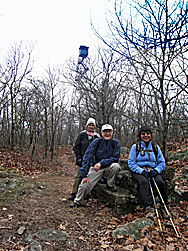 followed. From the trailhead on the west side of Lake Road, head into the woods on a steep, rocky footpath. In about 200 feet, you'll come to a fork in the trail, where you bear left. Then, in about five minutes, you'll reach an intersection with an old woods road. Turn left onto the woods road, which soon becomes quite steep and rocky.

In five minutes, you'll reach another fork in the trail, with a tree in the middle of the fork and many rocks piled in front of it. The right fork will be your return route, but for now, bear left and continue to follow the woods road up the mountain. Soon, the grade moderates a little and the trail becomes less rocky, but the steep climb soon resumes. Along the way, there are limited views through the trees to the left of the trail.

After about half an hour of steep climbing (from the last intersection), you'll pass stone steps to the right of the trail (the remains of a former ranger cabin) and reach the summit ridge. Just ahead is the fire tower. There are no views from the base of the tower, but you'll want to climb this 90-foot tower to get a spectacular view of the countryside. The three lakes you see below to the east are (from north to south) Twin Island Pond, Stissing Pond and Thompson Pond.

After resting from your steep 1,000-foot climb and taking in the panoramic views, descend the tower and head 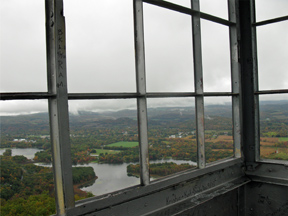 south (straight ahead) along the summit ridge. In about two minutes, bear right and descend a narrow footpath, then turn left at the next intersection and descend to a woods road. Turn right onto this rocky road, which descends steeply. After a while, the road bears right, passes rock ledges on the right, and continues to descend more gradually on a less rocky route. You'll come to a number of forks and intersections; in each case, bear right and stay on the woods road, continuing to descend gradually.

About half an hour after leaving the fire tower, you'll come to the fork you passed on the climb, with the tree in the middle and rocks piled up in front of it. Turn left here, now retracing your steps. At the next fork, bear right and descend the final pitch to Lake Road, where the hike began.