The trail parallels a stream on the right. Continue ahead where a branch road goes off to the left, but a short distance beyond, the trail turns left, away from the stream, and begins to climb. You’ll pass abandoned concrete picnic tables on the left and an abandoned shelter (as well as a newer building) on the right. The trail climbs a rise and – just before reaching a paved road – turns sharply left and descends to cross Park Road, the main road that circles the park. Just beyond, it reaches a junction with the White Trail, which begins here. Follow the yellow blazes, which turn right on a wide gravel path. 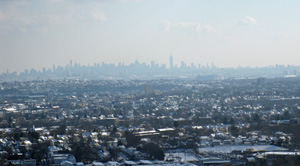 About 0.2 mile beyond the stables, the trail reaches an unobstructed viewpoint to the east from the edge of the ridge. Clifton, as well as the southern part of Paterson, may be seen directly below, with much of southern Bergen County beyond, and the Manhattan skyline clearly visible in the distance. The Verrazano-Narrows Bridge is at the extreme right of this broad panorama. This is a good place to take a break while enjoying the spectacular view.

The trail continues north along the ridge, passing several more viewpoints. Soon, you’ll reach a stone observation tower, built in the 1890s by a wealthy silk manufacturer as part of Lambert Castle, at the base of the mountain. The trail skirts to the right of the tower, following a stone wall.

Beyond the tower, the Morris Canal Greenway Trail (marked with canal-boat-logo-on-yellow blazes) joins from the right at a break in the stone wall. Follow both the yellow and the Greenway logo blazes, which curve to the right (do not descend on the macadam path). Soon, the trail descends on a rocky path and stone steps, and it briefly parallels the paved park road.

About 0.2 mile from the tower, a side trail to the right leads to another expansive viewpoint to the east from the edge of a cliff. A police firing range is located directly below, so don’t be startled to hear gunshots! Just beyond, the trail passes a small gravel parking area on the left. It enters the woods on a footpath, then emerges onto a grassy field and follows along its right side.

At the end of the field, the Yellow Trail, together with the Greenway Trail, descend on a footpath to the entrance to an overlook. Here, the White Trail and the Greenway Trail leave to the right. It is worth making a short detour to the overlook, which affords a panoramic view over downtown Paterson (directly below) and High Mountain to the north.

After taking in the view, return to the entrance to the overlook and turn right to continue on the Yellow Trail, which follows a macadam path parallel to Park Road. On the left, you’ll pass a plaque honoring Robert Dix Benson, the first President of the Passaic County Park Commission. At the next intersection, follow the Yellow Trail as it bears right and climbs along a paved road that leads to Veterans Memorial Point, the site of a communications tower.

Just beyond a guardrail barrier at the end of the paved road, the trail bears left and descends into the woods. A quarter of a mile beyond, after crossing the White Trail, the Yellow Trail climbs over a small rise and descends, first gradually, then more steeply on switchbacks.

At the base of the descent, the trail goes across a grassy area, then crosses the park entrance road at a kiosk. It turns right, passes through an opening in a wooden fence, and begins to parallel Mountain Avenue. After crossing its outlet stream on a wooden footbridge, the trail runs along the west side of Barbour’s Pond. At the end of the pond, bear left at a fork, proceed across a footbridge, and continue across the lawn and up the hill to the parking area where you began the hike.