From the east end of the Bear Mountain Bridge, proceed north on N.Y. 9D for 2.5 miles to the entrance of Manitoga, on the right side of the road. Turn right and proceed up the driveway to the parking area.

Take the Metro-North Hudson Line to the Garrison Station (visit the MTA website for schedules).  Taxi service from the station to Manitoga is available by prior reservation; call 845-265-8294.

Manitoga was the home and studio of designer Russel Wright, who restored a landscape that had been damaged by quarrying and lumbering. The three main trails on the property, which are are laid out ladder-like up the hill toward Lost Pond, are intended to be hiked in a clockwise direction. Although they are also blazed in the other direction, those blazes have a black dot in the middle, indicating that this is not the preferred direction of travel. This hike follows the trails in a clockwise direction, but you will notice blazes with black dots when you retrace your steps on side trails that lead to viewpoints.

After stopping at the Guide House to register, head uphill on a wood-chip road. Turn left at a sign for “paths,” then turn left again at a larger sign. You’ll be following the blue-blazed Lost Pond Trail Loop, but at first, this trail is co-aligned with the red-blazed Wickopee Trail Loop and the white-blazed White Pine Trail Loop.

Follow the trail, marked with white, red and blue blazes, as it climbs on stone steps and switchbacks. After passing through mountain laurel thickets, the trail goes between two large boulders and levels off. It then descends a little to cross a wooden bridge over a stream. The trail now turns sharply left to briefly parallel the stream, then curves to the right. 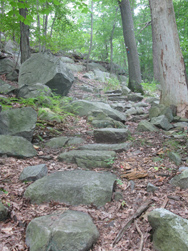 Just beyond, a triple-yellow blaze marks the start of a short side trail that goes off to the left to a viewpoint known as the Sunset Osio. The view from this location is very limited when there are leaves on the trees, but the short side trip is worthwhile, as there are two interesting boulders at the end of the yellow-blazed side trail.

Return to the main trail and turn left. You now head uphill on an old woods road. Soon, the red-blazed Wickopee Trail Loop leaves to the right, but you should continue ahead, now following white and blue blazes. A short distance beyond, you’ll cross a stream on rocks opposite a cliff. Next, the white-blazed White Pine Trail Loop goes off to the right. Continue ahead, now following only blue blazes. The trail curves to the right and continues to ascend. Along the way, a yellow blaze on the right of the trail marks the Mossy Overlook Osio, a limited viewpoint from which you can see across the Hudson River.

A short distance beyond, you’ll reach a junction where a sign indicates that the Osborn Loop is to the left. Continue ahead on the blue-blazed trail, following the sign for “Lost Pond.” The trail now crosses a stream and continues to ascend.

After passing through dense mountain laurel thickets, you’ll reach Lost Pond. At the southern end of the pond, a yellow blaze on the right marks the Lost Pond Osio, another limited viewpoint over the Hudson River, and a triple-yellow blaze on the left marks the start of a connecting trail that leads to the Osborn Loop. Turn left and follow this yellow-blazed trail, which climbs over rocks adjacent to the pond, descends a little, climbs steadily to the crest of a rise, then descends to a junction with the blue-blazed Osborn Loop Trail.

Just beyond the height of land (about 860 feet), watch carefully for a large cairn and a triple-yellow blaze on the left, which mark the trailhead of the Curry Pond Trail. Turn left and follow this yellow-blazed trail downhill on a moss-bordered footpath through mountain laurel thickets. At first, the descent is gradual, but it soon steepens. 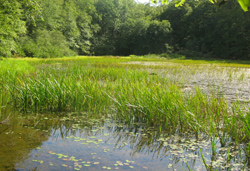 After descending alongside a cliff, the trail crosses a stream (the inlet of Curry Pond) and turns left to briefly parallel it. The trail climbs a little but soon resumes a steady descent. It recrosses the inlet of Curry Pond and, just beyond, approaches the pond (on the left). For most of the year, Curry Pond resembles a wetland rather than a pond.

Continue ahead on the Curry Pond Trail until it ends, at a large cairn, at a junction with the blue-blazed Osborn Loop Trail. Turn left onto the blue-blazed trail, which crosses a stream on rocks and begins a gradual climb (do not follow the sign, just to the right, which points to Manitoga).

A short distance ahead, be alert for a large cairn and a small white sign, which mark the junction with the yellow-blazed connecting trail. Turn right onto this trail and retrace your steps back to Lost Pond. Here, you should turn left and follow the blue-blazed Lost Pond Trail Loop downhill.

About halfway down, you’ll notice a triple-yellow blaze on the left. Turn left and follow this yellow-blazed side trail to the Chestnut Oak Ridge Osio, a panoramic viewpoint over the Hudson River (the best view is a short distance beyond the triple blaze that marks the official end of this side trail). After taking in the view, retrace your steps to the blue-blazed trail and turn left.

A short distance beyond, you’ll come to the Four Corners, where the white- and blue-blazed trails come in from the right. Turn left and follow the joint white, red and blue trails, which descend on switchbacks and stone steps to return to the large sign near Mary’s Meadow. At the sign, turn right to return to the parking area where the hike began.