Take I-80 West to Exit 12 (Blairstown/Hope). Turn right at the bottom of the ramp and follow County Route 521 north for 4.7 miles to N.J. Route 94. Turn left onto Route 94 and follow it for 0.2 mile to a traffic light. Turn right at the traffic light, but then continue straight ahead on Bridge Street (do not follow signs for Route 521, which immediately makes a second right). Proceed to a “stop” sign at the top of the hill, turn sharply right, then almost immediately turn left onto Millbrook Road. Follow Millbrook Road for six miles until you reach the crest of the Kittatinny Ridge. The hike begins where the white-blazed Appalachian Trail crosses Millbrook Road and heads south. Here, a gravel road, blocked by a gate (marked “Fire Road – Do Not Block), goes off to the left. Limited parking is available at the trailhead, but if no spaces are available, continue ahead for another 500 feet to a second parking area on the right side of the road. 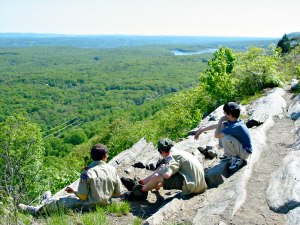 About 300 feet beyond the A.T. turnoff, you will see a triple-orange blaze and a sign for the Rattlesnake Swamp Trail on the right side of the road. Turn right, leaving the road, and enter the woods on a footpath. The trail proceeds through a dense forest of mountain laurel, hemlock and rhododendron, with the swamp to your right and a secondary ridge beyond. You are now traversing a wild, remote area, and although you probably won’t encounter any rattlesnakes, you are likely to see other wildlife.

At one point, the trail detours to the left, climbing a little further up the hill to avoid a wet section of the former trail route. When the trail goes back down to the level of the swamp, you’ll tunnel under dense rhododendron thickets and then cross a stream, the inlet of Catfish Pond, on rocks. Soon, the swamp ends, the vegetation becomes less dense and the trail descends a little. 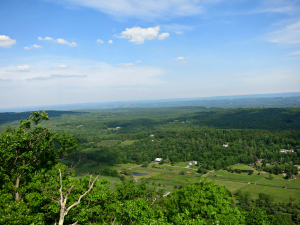 After crossing the stream three more times, the Rattlesnake Swamp Trail approaches Catfish Pond, which may be visible through the vegetation to the right. It does not reach the shore of the pond, though, and it soon bears left, away from the pond. The trail emerges onto a woods road, which it follows, past an abandoned concrete slab on the right, to a T-intersection. To the right, the road leads to the Mohican Outdoor Center, operated by the Appalachian Mountain Club, which offers lodging to hikers (for more information, go to www.outdoors.org/lodging-camping/Lodges/mohican/index.cfm), but you should turn left, continuing to follow the orange blazes.

The trail now begins a gradual climb up the Kittatinny Ridge, following a woods road with a rocky treadway. After a while, the grade steepens as the trail narrows to a footpath and climbs rock steps. The trail then levels off, only to climb again. Finally, after another level stretch, you’ll climb once more to reach the crest of the ridge. The Rattlesnake Swamp Trail now descends briefly, and it ends at a junction with the A.T. on the eastern face of the Kittatinny Ridge.

The rock ledges at the junction afford a panoramic east-facing view over the Great Valley. To the south, you can see the Upper and Lower Yards Creek Reservoirs, which are pumped-storage facilities used to generate electricity. This is a good place to take a break and enjoy the view. 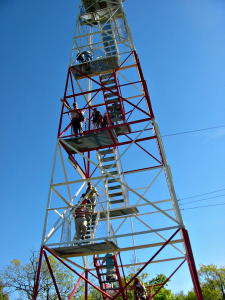 When you’re ready to continue, proceed north along the A.T. The trail runs close to the edge of the ridge, and you’ll be afforded more views over the Great Valley to the east. In another mile, you’ll reach the base of the 60-foot-high Catfish Fire Tower, which affords panoramic 360° views. If the fire tower observer is present, he may invite you to climb the tower to enjoy the views.

From the fire tower, the A.T. begins to descend along a gravel road (the access road to the tower). Soon, the white blazes turn left, leaving the road, and descend on a rocky footpath. Continue to follow the white-blazed A.T., which will lead you back to the starting point of the hike. After briefly rejoining the road, the A.T. again leaves the road, this time to the right, and follows a footpath downhill. The trail goes under power lines, passes through a dense rhododendron thicket, and reaches another junction with the road. Turn right, now retracing your steps along the road you followed at the start of the hike. In another ten minutes, you’ll reach the trailhead where the hike began.