Take the New York State Thruway to Exit 20 (Saugerties). After the toll booths, turn left onto N.Y. 212/N.Y. 32, and continue straight ahead at the next intersection to stay on Route 212. In 2.3 miles, turn right onto County Route 35 (Blue Mountain Road). In another 1.5 miles, turn left to continue on County Route 35, now designated as West Saugerties Road. Continue ahead on West Saugerties Road when it becomes County Route 33 and then Platte Clove Road, which climbs through Platte Clove on a steep, narrow road. After reaching the top of the steep climb, continue on Platte Clove Road for about two miles, and turn left onto Dale Lane. In 0.5 mile, turn right onto Roaring Kill Road and continue for - miles to the trailhead parking area, on the left side of the road.  NOTE: The section of Platte Clove Road that climbs steeply from West Saugerties is closed in the winter (from November 1st to April 15th). During this period, the trailhead should be accessed via N.Y. 23A. Take Thruway Exit 20 and turn left after the toll booths onto N.Y. 212/N.Y. 32, but after crossing over the Thruway, turn right onto N.Y. 32. In 6.0 miles, where N.Y. 32 bears right, continue straight ahead onto N.Y. 32A. In 1.9 miles, when N.Y. 32A ends, turn left onto N.Y. 23A and follow it up Kaaterskill Clove and through the village of Haines Falls. At the traffic light in the next village, Tannersville, turn left onto Depot Road and continue ahead on Spruce Street (County Route 16). When Spruce Street ends at a T‑intersection, turn left onto Platte Clove Road. Take the next left onto Elka Park Road and follow it for – miles to the trailhead parking area, on the right side of the road (along the way, the road changes its name to Roaring Kill Road).

Sugarloaf Mountain is one of the few peaks in the Catskills over 3,500 feet high with trails that loop around the mountain. Besides affording panoramic views of the adjacent mountains, this hike passes several interesting quarry sites and small ponds. It involves some very steep climbs and descents, and the descent of the west side of Sugarloaf can be treacherous when covered with snow and ice. Do not attempt this hike in the winter unless you come equipped with crampons.

From the parking area, head into the woods on the yellow-blazed Roaring Kill Trail, which climbs gently, crossing a stream several times. In a quarter mile, you’ll reach a junction with the Pecoy Notch Trail and the Mink Hollow Trail, both blazed blue. Turn left and follow the Pecoy Notch Trail to begin your loop hike of Sugarloaf in a clockwise direction.

The trail climbs on a moderate grade. In a quarter mile, you’ll notice on the right the remnants of an old bluestone quarry. The trail now levels off and soon reaches a hemlock grove. Here, the trail bears left and descends slightly to reach a north-facing viewpoint over Roundtop Mountain and Kaaterskill High Peak. This area was also part of the quarry, and the rocks left over from the quarry have been used by hikers to construct chairs. You’ll want to take a break here to enjoy the view and the unusual rock chairs. 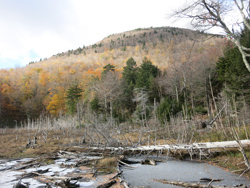 A short distance beyond, the trail crosses a stream below an attractive cascade, then climbs parallel to the stream. After moving away from the stream, it passes a small pond on the right. Just beyond, it goes around another pond, with a panoramic view of Sugarloaf Mountain behind the pond. After climbing some more, you’ll reach the end of the Pecoy Notch Trail at a junction with the red-blazed Devil’s Path.

Turn right and follow the Devil’s Path as it begins a steep climb of Sugarloaf Mountain. On the way up, you’ll be afforded views, through the trees, of Twin Mountain to the east. After you pass the sign indicating that you have reached 3,500 feet in elevation, the grade moderates, with level sections alternating with short climbs.

There are no views from the summit (elevation 3,800 feet), but a short distance beyond, a yellow-blazed trail on the left leads to a south-facing viewpoint. This view has grown in somewhat, but you can see a number of mountains, as well as the Ashokan Reservoir, over the trees.

Continue ahead on the Devil’s Path, which descends a little to reach two huge boulders along the trail. There is a limited view over Plateau Mountain from the top of these boulders. 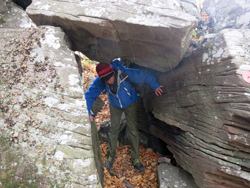 The Devil’s Path now begins a steep descent of the western slope of Sugarloaf Mountain. This section of the trail is often wet, and it is usually covered with snow and ice in the winter. Use caution at all times, but especially if the trail is wet or covered with ice. It will probably take you about an hour to traverse this trail section, which is less than a mile long. Near the base of the descent, you’ll go through a tunnel under an overhanging rock and pass by interesting cliffs with a large overhang. 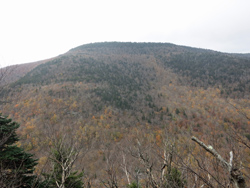 ws a relatively level route. It then descends a little to cross a stream. The bridge at this location has collapsed, but it is usually possible to cross the stream on rocks.

A short distance beyond, the trail climbs on a switchback to reach a viewpoint over Plateau Mountain to the west. It continues on a relatively level woods road, then bears left and descends on switchbacks. Near the base of the descent, it passes another interesting quarry. The tailings from this quarry were used to build stone walls adjacent to the trail.

Below the quarry, the trail turns right and follows a level route. After crossing a stream, you’ll reach the junction with the yellow-blazed Roaring Kill Trail and the blue-blazed Mink Hollow Trail where you began the loop portion of the hike. Turn left onto the yellow-blazed Roaring Kill Trail and follow it back to the trailhead at the parking area, where the hike began