Take I-80 west to Exit 43A (I-287 South) and proceed south on I-287 to Exit 39B (N.J. Route 10 West). Proceed west on N.J. Route 10 for about 8.5 miles and turn right onto Dover-Chester Road (County Route 513). At a T-intersection, reached in 0.4 mile, turn left onto Randolph Avenue. In 0.6 mile, after passing a sign “Welcome to the Township of Mine Hill” and crossing a bridge over a stream, park in a small dirt parking area on the right side of the road. (NOTE: Along the way, you may notice directional signs indicating the route to Hedden County Park. These signs lead you to other park entrances and should not be followed.) GPS address:  401 East Randolph Avenue, Mine Hill Township, NJ 07803.

A component of the Morris County Park System, the 380-acre Hedden Park is best known for its developed recreational facilities, including a six-acre lake that offers fishing and boating. But it also features a network of over three miles of hiking trails. This hike follows the attractive Jackson Brook for over a mile, passes the interesting Indian Falls, and traverses remote portions of the park. Although the hike is not exceptionally difficult, it involves a total elevation gain of over 400 feet, with several rather steep sections.

From the parking area, descend to the brook, where a triple-yellow blaze marks the start of the Jackson 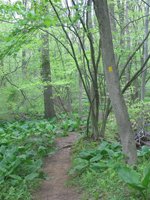 In about half a mile, you’ll reach paved Indian Falls Road. Here, the trail turns right along the road and crosses a bridge over the brook. At the end of the guardrail beyond the bridge, follow the yellow blazes as they turn left and re-enter the woods, with the brook now on your left. The trail soon moves away from the brook. It heads slightly uphill, crosses a wooden footbridge over a tributary stream, and ends at a T-intersection with the white-blazed Hedden Circular Trail (marked by a bench).

Turn left and follow the Hedden Circular Trail, which at first runs above the brook, then descends to the brook. You can see private homes on the opposite side of the brook, but this stretch of trail is very pleasant, with the cascading brook to your left. After passing a private footbridge across the brook, you’ll reach a junction with the red-blazed Mountain Trail, which leaves to the right. Continue ahead on the white trail.

In another 400 feet, with a bench on the right, the white trail bears right and begins to climb. Leave the white trail here and proceed straight ahead on the light-green-blazed Indian Falls Trail, which continues to run along the brook. In another 500 feet, you’ll notice a small waterfall on the left. This marks the beginning of Indian Falls – a series of minor waterfalls. The most fascinating section – where the brook divides into two falls, separated by a huge boulder – cannot be seen clearly from the trail, which descends rather steeply to r 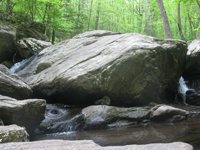 each the brook just beyond the base of the falls. When you reach the bottom of the steep descent, you might want to walk back along the brook to get a better view of this attractive waterfall.

After exploring this fascinating feature, proceed ahead on the green Indian Falls Trail, which continues to parallel the brook, passing more cascades. You’ll notice a picnic area on the opposite side of the brook. With a bridge over the brook visible ahead on your left, you’ll pass a triple-green blaze on a tree, marking the end of the Indian Falls Trail. Just ahead, turn right onto the paved road, bear right at the next fork, and continue along the paved road, which proceeds uphill.

Just before reaching a bridge over a stream, turn right and follow a blue-blazed trail that leads uphill to a junction with the white-blazed Hedden Circular Trail. Turn left onto the white trail, which heads uphill on a woods road. You’ll be following this trail for the next mile.

Soon, the white blazes turn left, leaving the woods road, and descend through the woods on a footpath. At the base of the descent, a blue-blazed trail proceeds ahead (it leads to another parking area), but you should bear right to continue along the white-blazed Hedden Circular Trail. The white trail now begins a rather steep climb. On the way, you’ll cross the woods road that you previously followed (to the left, this woods road is blazed blue). Before reaching the crest of the ridge, the trail bears right and continues along the shoulder of the ridge, following a rocky treadway that traverses a quiet, secluded area of the park. Soon, the trail begins to descend.

After passing a circle of stones on the right, the trail descends along a stream, then bears left and crosses the stream on a wooden footbridge. Once across the stream, the treadway becomes much smoother. The trail now begins another steady climb. After crossing a gravel road, you’ll pass one end of the green-blazed Indian Falls Trail on the right, but you should continue ahead on the white-blazed Hedden Circular Trail, which climbs more steeply.

Just below the crest of the ridge, with a stone wall visible ahead, the trail turns right. At the end of the stone wall, the trail again turns right, onto a dirt road. Just beyond, the red-blazed Mountain Trail begins on the right, but you should continue along the road, passing picnic tables on the left, with a softball field beyond.

As the road curves to the left, the white trail bears right, leaving the road, and begins to descend. Follow the white blazes, which soon turn right onto a woods road that comes down from the softball field, continuing to descend steadily.

In another 0.2 mile, you’ll reach a fork where the white trail bears right and the yellow-blazed Indian Falls Trail begins on the left. Turn left and follow the yellow trail back to the parking area on Randolph Avenue where the hike began.