Take the Long Island Expressway east to Exit 42 (Northern State Parkway east). Proceed east on the Northern State Parkway for 16 miles to its terminus, where it merges into NY Routes 347/454 east. In 1.8 miles, where the two routes diverge, bear left to stay on NY 347. Follow NY 347 for 0.4 mile and turn left onto Brooksite Drive. Follow Brooksite Drive for 1.7 miles to a parking area on the left for Blydenburgh County Park.

Take the Port Jefferson branch of the Long Island Rail Road to the Smithtown station. Head south from the station platform and cross to the south side of West Main Street (NY 25). Proceed west on Edgewater Avenue, which forks off of West Main Street just east of the railroad overpass. Follow Edgewater Avenue for three blocks and turn left onto Juniper Avenue. Follow Juniper Avenue to its end and continue on a footpath to Brooksite Drive. Cross Brooksite Drive to the parking area where the hike begins. The distance from the station to the trailhead is about one mile, and the walk is on quiet residential streets with little traffic.

From the parking area, head into the woods, following the white blazes of the Long Island Greenbelt Trail. Just ahead, you’ll come to a fork where you should bear left. You’re now following a blue-blazed trail that leads around the pond.

At first, the blue blazes follow a wide bridle path, but be alert for a double blaze, where the blue-blazed trail begins to follow a more attractive footpath parallel to wetlands on the right. In a short distance, the trail begins to run close to the shore of the pond, with a number of short side trails leading down to viewpoints over the pond. At times, the trail will briefly rejoin the bridle path; in each instance, keep right to continue on the blue-blazed footpath. 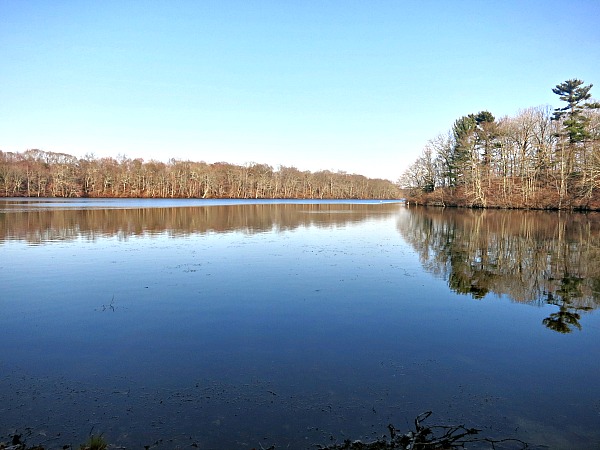 At 2.0 miles, the trail rejoins the bridle path and, just ahead, it passes a boat rental area, with a parking lot on the left. It crosses a footbridge over a wet area and, at 2.2 miles, reaches the paved park entrance road. The trail turns right and follows the road over a wetland with dense vegetation, then turns right at a short section of fence and reenters the woods on a footpath, now heading north.

Soon, the trail begins to run parallel to the East Branch of the Nissequogue River. A short distance ahead, at 2.5 miles, you’ll come to a bench that overlooks the river. Here, the trail turns right and crosses the river on a wooden footbridge. Just beyond, the trail traverses a long, winding boardwalk - a third of a mile in length - over a wetland.

The next section of trail proceeds over undulating terrain, with many short ups and downs. This is a contrast to the trail along the east side of the pond, which is nearly level. The pond soon comes into view through the trees, and you’ll cross a dirt road that leads down to the pond (directly opposite the road that you crossed heading south along the east side of the pond).

A short distance beyond, the blue trail bears left and reaches a T-intersection with a dirt road. Turn left at this junction (at this writing, there are no blazes that indicate the correct direction to proceed), but bear right at the next intersection and at subsequent ones to continue around the pond. The trail heads down a badly eroded slope, turns right again, and crosses a wooden bridge over the outlet of a wetland on the left, with a shallow flow of water streaming into the pond on the right. After another right turn, the trail closely parallels the pond, with several openings that offer broad views over the pond. 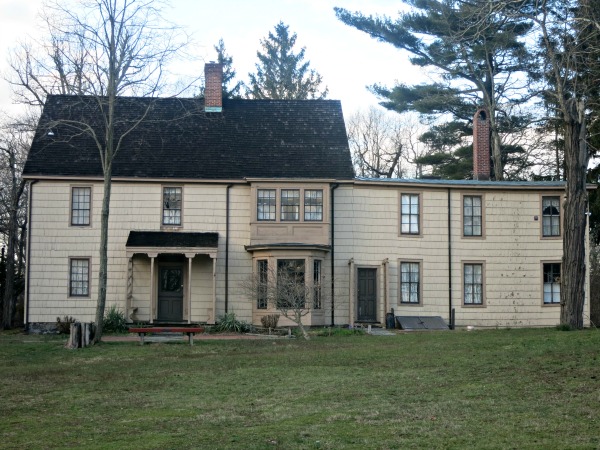 At 4.1 miles, the blue-blazed trail ends at a junction with the white-blazed Long Island Greenbelt Trail. Turn right onto the Greenbelt Trail, which you’ll be following for the rest of the hike. Almost immediately, the trail crosses over the dam of the pond, and it soon reaches the historic Miller’s House, built in 1802. Here, the trail turns right, climbs wooden stairs, and emerges at the lawn of the historic Blydenburgh-Weld House (built in 1820). It crosses the lawn, then bears right and descends towards the pond.

The trail heads east on a dirt road, following close to the shore of the pond, for some distance. It then moves away from the pond, still following the road. This section of the trail is often wet, with many large puddles covering nearly the width of the road.

In a little over a mile from the Blydenburgh-Weld House, you’ll reach a junction where the blue-blazed trail begins on the right. Turn left to return to the parking area where the hike began.