From the kiosk near the entrance to the parking area, head uphill on the blue-blazed Riverwalk Trail, which follows a rocky footpath. In 250 feet, the blue-blazed trail turns left, but you should proceed ahead on the orange-blazed Ridge Trail, which continues to climb. After the trail makes a sharp right turn, the grade steepens. It briefly moderates, but after bearing left, with a home below on the right, the trail continues to ascend on a rocky, rugged treadway, with rock and wood steps provided for part of the way. 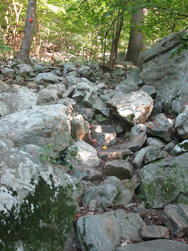 After the trail bears sharply left in sight of another private home below on the right, the grade moderates, and the trail soon reaches a panoramic viewpoint over the Musconetcong River valley from a rock outcrop to the left of the trail. The tranquil view includes farms and small towns. This is a good place to take a break and rest from the climb – the one steep ascent on the hike.

The Ridge Trail now briefly descends to a junction with the yellow-blazed Overlook Trail. Here, it bears left and climbs to regain the ridge. Follow the orange-blazed trail as it continues along the ridge, with views through the trees on the left. Along the way, you’ll pass an interesting pointed rock on the left. After about half a mile of ridgetop walking, the trail bears right and descends slightly to parallel an old stone wall. Here, the White Trail begins on the right, but you should continue to follow the orange-blazed Ridge Trail, which turns left and climbs back to the ridge.

Soon, the trail begins a steady descent from the ridge. After crossing a stream, it turns left and follows a woods road downhill. Near the base of the descent, the White Trail leaves to the right. Continue ahead on the orange-blazed trail, which emerges onto a field and follows a mowed path along its left side. At the end of the field, it bears left into the 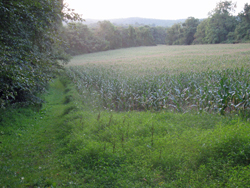 woods and emerges onto another field. Turn left here and begin to follow the blue-blazed Riverwalk Trail, which proceeds along the edge of the field.

At the end of the field, turn right and follow along its southern edge, then turn left and follow the blue blazes as they descend on a footpath to the Musconetcong River. After crossing a tributary stream, the trail widens to a woods road. When you reach a fork, bear right to continue along the blue-blazed trail.

In a third of a mile, the Riverwalk Trail reaches another fork. The trail ahead is also marked blue, but you should turn right, leaving the woods road, follow a footpath for 50 feet to the river, then turn left and proceed along the river, still following blue blazes. For the next half a mile, the trail follows a footpath that closely parallels the scenic river, with attractive cascades. 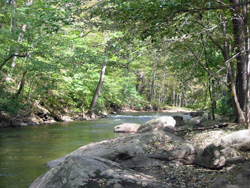 After passing a huge sycamore tree, the trail reaches Point Mountain Road. If you have had enough hiking for the day, you can turn left and follow the road for 300 feet to the parking area. Otherwise, you can complete another mile-long loop. Cross the road diagonally to the right and continue along the blue-blazed trail, which soon heads slightly inland, following a footpath through dense wild rose thickets. This trail section is often somewhat overgrown, although it is well blazed and relatively easy to follow.

The trail approaches the river once more, then bears left, away from the river, and begins to run through a deciduous forest. Soon, the trail bears sharply left and begins to head northeast, paralleling Musconetcong River Road, visible through the trees to the right. In half a mile, you’ll return to Point Mountain Road, with the parking area where the hike began directly across the road. 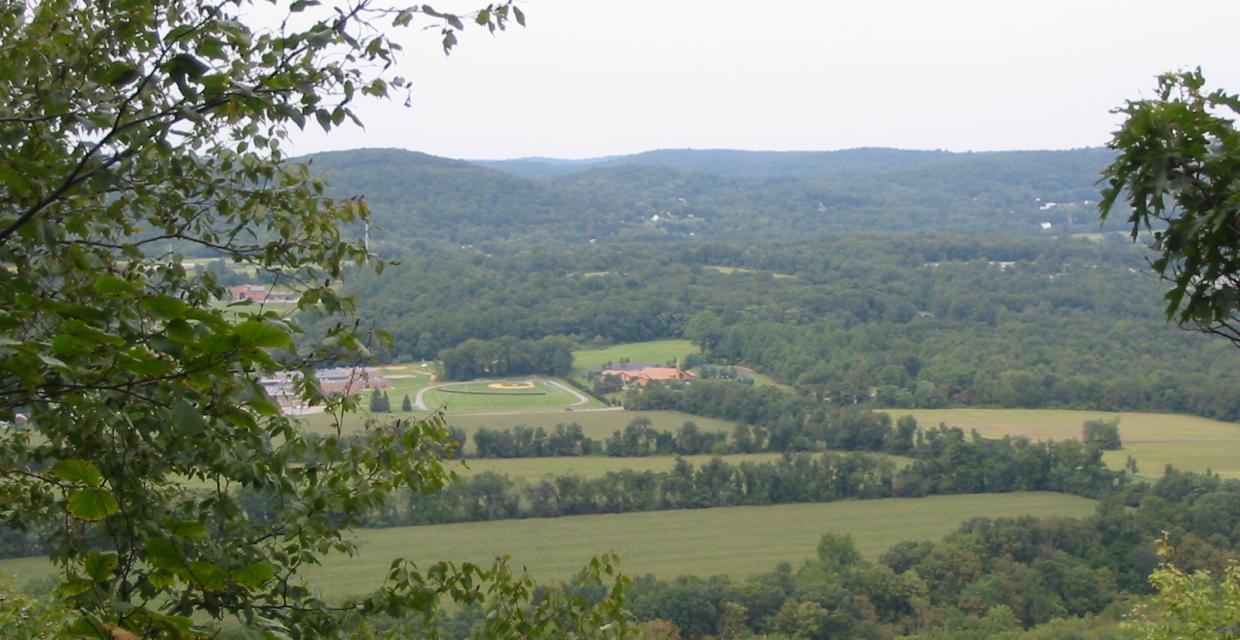 This loop hike climbs to the summit of Point Mountain, follows mowed paths along cultivated fields, and parallels the scenic Musconetcong River.

From the kiosk near the entrance to the parking area, head uphill on the blue-blazed Riverwalk Trail, which follows a rocky footpath. In 250 feet, the blue-blazed trail turns left, but you should proceed ahead on the orange-blazed Ridge Trail, which continues to climb. After the trail makes a sharp right turn, the grade steepens. It briefly moderates, but after bearing left, with a home below...

Take I-80 to Exit 26 (Budd Lake/Hackettstown) and proceed west on US 46 for 7.4 miles to Hackettstown. Turn left onto NJ 182 and follow it for 1.0 mile, then turn right onto NJ 57. Follow NJ 57 for 6.5 miles and turn left at the traffic light onto Point Mountain Road. Continue for 0.4 mile to a truss bridge over the Musconetcong River. The parking area is on the left, about 300 feet beyond the bridge.

rate experience
May 16, 2017
3
Point Mountain loop hike
I like this hike. It is an easy hike for the most part with only the initial vertical climb up the ridge. Once you are at the top its an easy walk. The hike is also kid friendly but parents should be mindful only because there is a lot of poison ivy on the trail (not directly on the path itself but on either side). Also, in some spots the Orange trail can be marked better (some markings that are painted on trees are faded). There were still a few wet/muddy area (I hiked on a Tuesday and we had rain here on Saturday/Sunday) but otherwise a dry, easy to follow trail. One thing I was disgusted by (definitely not the park departments fault) was the litter and graffiti present at the top of the ridge where the scenic overlook is. Some of the graffiti was pretty bad foul language (read: 'F' word) so I hope they can remove it all but trashy people will be trashy people.
V_Cioni
March 13, 2011
0
This hike has it all!
<p>This hike starts out with a steep climb, reaches the top of the hill with some impressive views of the valley below and interesting rock formations and then gently brings you through tranquil woods, a farm and along a rushing stream popular with fishermen. &nbsp;It is a very refreshing hike, especially when you soak your tired feet in the cold, clear Musconetcong River! &nbsp;I'd like to bring a canoe or kayak and paddle from the Point Mountain Road bridge to Route 31 someday.</p>
jjotz
Log in or register to post comments