From the parking area, follow a handicapped-accessible path past a playground to a kiosk, which marks the start of the blue-blazed Hutcheon Trail. Follow this trail into the woods

In a short distance, you’ll notice a triple yellow blaze on a tree to the right. Turn right and follow the yellow-blazed Sneden-Haring-Lamont Trail, which heads south, then turns right at a T-intersection and crosses a brook on a culvert. To the right is the site of the Sneden Ice Pond (now overgrown with vegetation). The trail now turns left and continues to head south.

As the trail approaches the wide Roaring Brook, the blue-blazed Hutcheon Trail joins from the left, and both trails cross the brook on rocks. On the other side, proceed ahead, following the blue blazes, which parallel the brook. Soon, you’ll notice a triple-orange blaze, which marks the start of the Brook Connector Trail, on a tree to the left. Turn left and follow this trail, which continues to parallel the scenic Roaring Brook, with views of the brook below (when the water is high, there are attractive cascades in the brook).

After climbing along the brook for a quarter mile, the Brook Connector Trail ends at a junction with the white-blazed Lamont Rock Trail. Turn right onto this trail, which descends briefly, then bears left, crosses an old, eroded woods road and continues to descend through an area with many trees toppled during Hurricane Sandy. After descending some more, the Lamont Rock Trail is joined by the blue-blazed Hutcheon Trail.

Just ahead, the Hutcheon Trail ends, and the yellow-blazed Sneden-Haring-Lamont Trail joins from the right. In 50 feet, where the two trails diverge, turn left and continue to follow the white blazes.

The Lamont Rock Trail now climbs steadily, soon passing two old stone cisterns. It continues to climb to Lamont Rock (a huge boulder), on the left. Just beyond, the white trail turns left and is joined by the Red Circle Trail of Camp Alpine, Greater New York Councils, Boy Scouts of America. Follow the joint white and red trails as they climb very gently to the highest point in the preserve (480 feet), from where the Hudson River can be seen through the trees during leaf-off season.

The joint trails now begin to descend. Soon, the Red Circle Trail leaves to the right, but you should turn left and continue along the white-blazed Lamont Rock Trail. In 0.2 mile, the yellow-blazed Sneden-Haring-Lamont Trail joins from the left.

A short distance beyond, where the two trails diverge, bear right and follow the yellow-blazed trail along a wide woods road, crossing Roaring Brook on rocks. Just beyond, turn left onto the red-on-white-blazed Roaring Ravine Trail and follow it as it descends along the north side of the brook. At the base of the descent, the Roaring Ravine Trail ends at a junction with the blue-blazed Hutcheon Trail. Turn right onto the blue-blazed trail, which descends gradually, crossing a stone bridge over a brook, and follow it back to the parking area where the hike began. 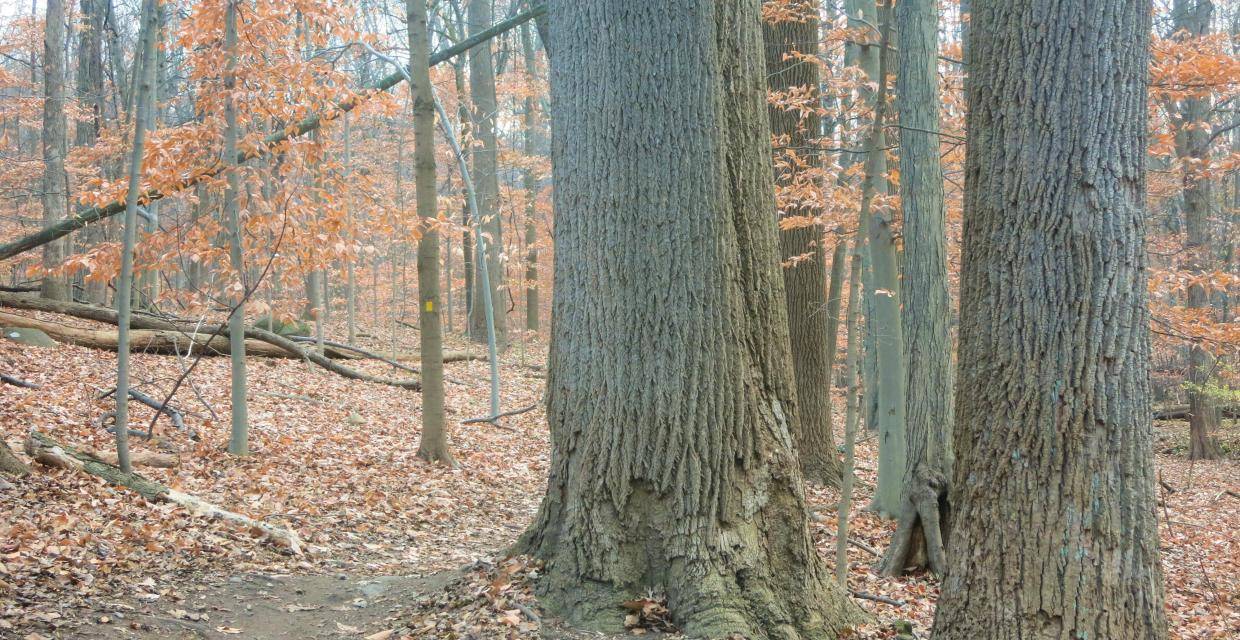 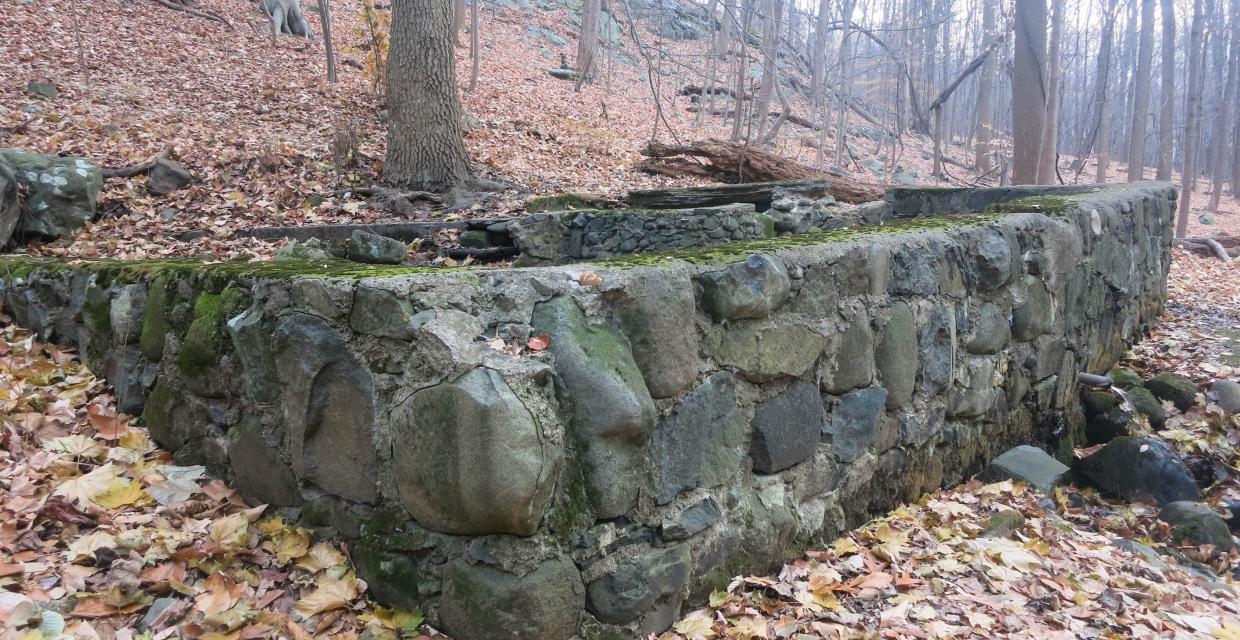 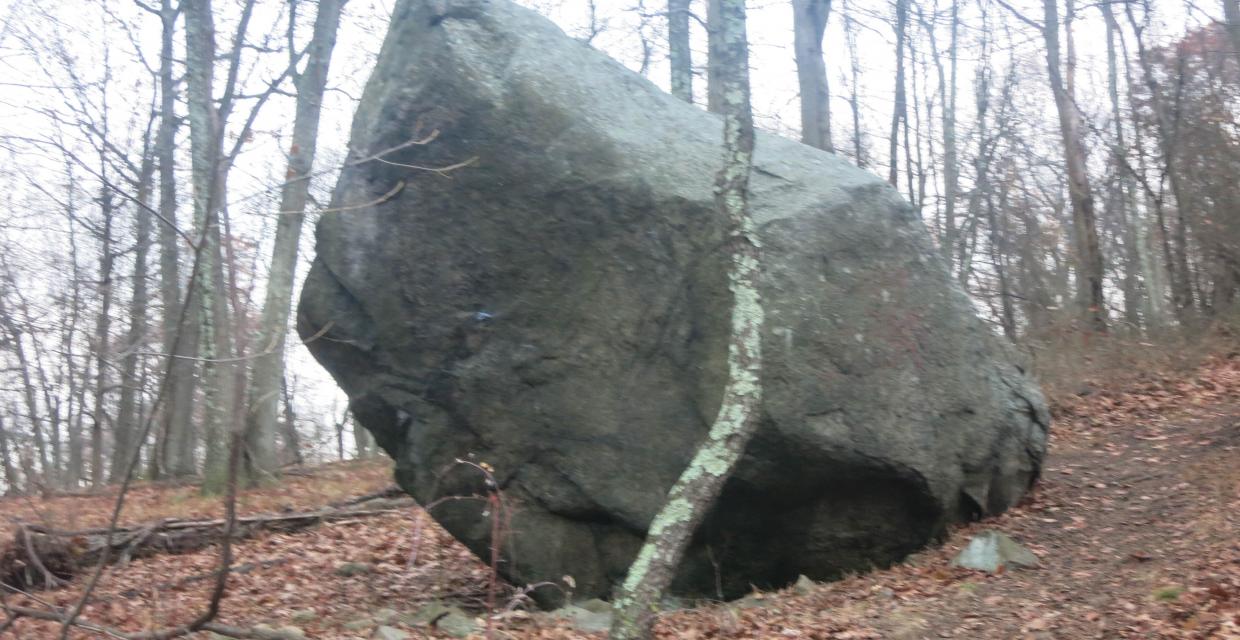 Looping around this preserve, on the western slope of the Palisades, this hike climbs a scenic ravine and passes two old stone cisterns and the historic Lamont Rock.

Take the Palisades Interstate Parkway to Exit 4. Turn left at the bottom of the ramp onto Route 9W (if coming from the north, turn right onto Route 9W) and proceed for 1.1 miles, entering New York. At the next traffic light, turn left onto Oak Tree Road and, in 0.2 mile, turn left onto Closter Road. In 0.5 mile, after crossing under the Parkway, you reenter New Jersey, and the road becomes Rockleigh Road. Continue for another 0.2 mile to the Rockleigh Municipal Building (26 Rockleigh Road) and turn left into the driveway. Park in the rear of the building.