From the north end of the parking area, head north, passing the boat basin on the right and the Kearney House on the left. The house, which dates back to the 1700s, is open most weekend and holiday afternoons from May to October. It contains historical artifacts and exhibits on the history of the park, and is well worth a visit.

Beyond the Kearney House, cross a wooden bridge and bear left. You'll pass a stone monument with a plaque commemorating the landing of the British troops here in 1776 and proceed uphill on the Old Closter Dock Road, paved with cobblestones. This road, which dates back to 1761, was used for many years to access the Closter Landing, where boats took freight and passengers across the river to New York. (Interestingly, the information on the plaque is incorrect in two respects: the British troops crossed the river on November 20, 1776 -- not November 18th, and they actually landed at Huyler's Landing, a mile and a half to the south! These errors are pointed out in an adjacent sign).

At the top of the climb, continue ahead on the white-blazed Shore Trail, as the orange-blazed Closter Dock Trail (the 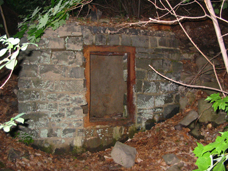 continuation of the Old Closter Dock Road) leaves to the left. The trail now levels off and continues along a pleasant, shaded woods road. Although the trail closely parallels the river, there is dense vegetation between the trail and the river, and (when there are leaves on the trees) only occasionally do glimpses of the river appear.  Soon, you'll notice stone steps climbing the hillside on the left. These steps lead to a bunker once used by the park to store dynamite. Just beyond, you'll cross a stone bridge, with a waterfall on the left.

A short distance beyond, by a large fallen tree, a side trail heads downhill on stone steps to a rocky beach -- the site of Cape Flyaway, a small fishermen's hamlet in the nineteenth and early twentieth centuries. In another 500 feet, a second side trail leads down to the river.

After about three-quarters of a mile, you'll reach a fork. A sign painted on a rock indicates that the Shore Trail takes the right fork, but you should bear left and follow the Upper Trail, which continues along the woods road, running about 100 feet above the river. Soon, you'll notice a wide path leading down to the river on your right, with picnic tables above on the left. This is the Excelsior Flats picnic area; you may wish to stop here for lunch. 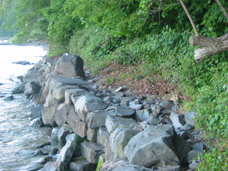 In 0.2 mile, you'll pass Twombly's Landing, a stone jetty that juts into the river. South of the jetty, the Shore Trail begins to follow a narrower path, and sections of the trail are "paved" with rocks. You should watch out for the three-leafed poison ivy, which grows in proliferation along the shore.

After about three-quarters of a mile along the Shore Trail, you'll notice stone steps going uphill on the right and leading down to a stone jetty on the left. This is the abandoned Excelsior Dock, from which ferry service once was provided in summer months to Yonkers. If the tide is low, you might want to walk out to the rocks at the end of the dock, from which you can see Bombay Hook -- a prominent landmark along the Palisades to the north.

The Shore Trail now widens to a woods road and begins to climb. Soon, you'll reach the junction with the Upper Trail. Continue straight ahead, heading south, and retrace your steps along the Shore Trail back to the Alpine Boat Basin, where the hike began. 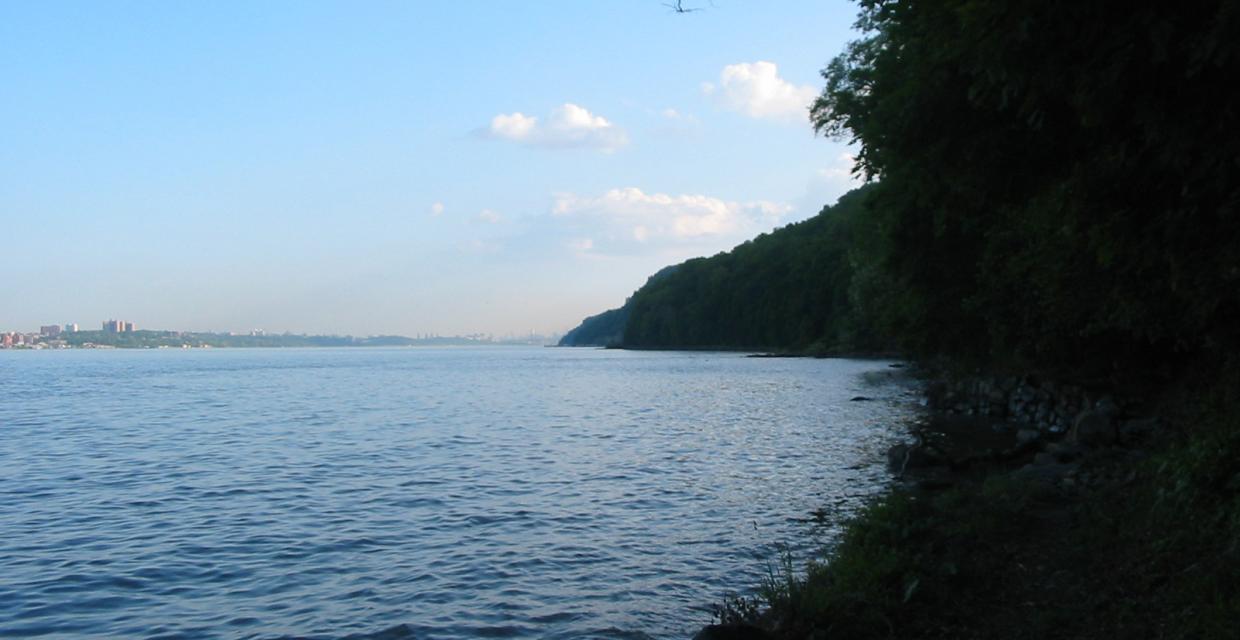 This “lollipop”-loop hike runs along the Hudson River north of the Alpine Boat Basin, with many scenic views across the river.

From the north end of the parking area, head north, passing the boat basin on the right and the Kearney House on the left. The house, which dates back to the 1700s, is open most weekend and holiday afternoons from May to October. It contains historical artifacts and exhibits on the history of the park, and is well worth a visit.

Beyond the Kearney House, cross a wooden bridge and bear...

Take the Palisades Interstate Parkway to Exit 2 (Alpine) and continue ahead on the Alpine Approach Road, following signs to the Alpine Boat Basin. (You may wish to stop at the Administration Building to pick up a free map.) When you reach a traffic circle near the bottom of the hill, go three-quarters of the way around the circle, then bear right and continue downhill to the boat basin. A $5 parking fee is charged on weekends from Memorial Day to Labor Day.

rate experience
May 26, 2016
0
Poison Ivy
<p>This is a beautiful trail, and if you are looking for an easy hike on a very hot day, this is the one. I choose this hike on Wednesday because weather was reaching 90 degress. Its a nice trail, plenty of shade, river breezes, no need to wear heavy hiking boots, sneakers are fine. I did not wear long pants and regretted it. 80% of the trail is lined with Poison Ivy. Be very carefull the poison ivy is rampant.</p>
kcondonpuder
April 18, 2015
0
Nice easy hike
<p>This was a nice easy hike to start off this summer. An alternate to this route is to walk along the Shore Trail all thru - but the historic features/waterfall and the workout was quite worth it.</p>
ulta
Log in or register to post comments