From the parking area, proceed east on the yellow-blazed Phoenicia-East Branch Trail, which crosses the West Branch of the Neversink River on rocks, and then climbs on a rocky footpath, reaching an old woods road in 0.4 mile. Follow the yellow-blazed trail as it turns right and runs along the level woods road. In another third of a mile, after passing a spring on the left, you’ll reach a junction with the red-blazed Wittenberg-Cornell-Slide Trail, marked by wooden DEC signs. This red-blazed trail will be your return route, but for now, continue ahead along the old road, following the yellow markers. The road briefly narrows to a footpath and then descends to cross a stream on a wooden bridge.

About a mile and a half from the start, you’ll reach another junction – this one, with the blue-blazed Curtis-Ormsbee Trail. This trail was named after two well-known hikers, “Father” Bill Curtis and Allen Ormsbee, both of whom perished in a snowstorm on Mount Washington, N.H. in June 1900 (a marble monument at the junction commemorates this tragic event). Turn left here and follow the blue blazes of the Curtis-Ormsbee Trail.

The trail climbs to the top of a large rock and then continues to ascend. After a short, steep section, it reaches a viewpoint to the north and west from a rock outcrop on the left side of the trail. Just beyond, you’ll reach the elevation of 3,500 feet – above which camping and fires are not permitted (except in the winter).

In another 0.2 mile, in a flat area, an unmarked side trail on the right leads about 200 feet to an outstanding viewpoint over Table, Lone, Rocky and Balsam Cap Mountains (the best views are from a rock ledge on the left). This is a good spot to rest and take in the view.

When you’re ready to continue, backtrack to the main trail and turn right, continuing to follow the blue blazes. The next section of the Curtis-Ormsbee Trail is particularly beautiful and interesting, with level sections alternating with rather steep climbs. Deciduous trees soon give way to a deep, dark spruce-fir forest. In another mile, after a short descent, the Curtis-Ormsbee Trail ends at a junction with the red-blazed Cornell-Wittenberg-Slide Trail.

Turn right and follow the red trail, which once served as the road to a fire tower on the summit, as it proceeds on a relatively level path along the summit ridge under a canopy of evergreens. Soon, the trail begins a steady climb. In about 0.7 mile, you’ll reach a panoramic viewpoint from a rock ledge on the left. This is one of the most spectacular viewpoints in the Catskills, with the entire Devil’s Path visible to the north. The flat-topped Blackhead Mountain may be seen in the distance.

Continue ahead and you’ll soon reach the actual summit (elevation 4,180 feet), marked by the remains of the foundation of the former fire tower. There are no views from here, but just beyond, you’ll come to a large rock ledge which overlooks Cornell and Wittenberg Mountains and the Ashokan Reservoir to the east. You’ve now climbed about 1,800 vertical feet from the trailhead, and you’ll want to spend some time enjoying the view and checking out the historic carvings on the ledge. Another interesting feature which you’ll want to see is a plaque just below the summit ledge in memory of John Burroughs, a naturalist who lived nearby, who often climbed these mountains.

After you’ve spent some time resting, retrace your steps and follow the red trail back to the junction with the Curtis-Ormsbee Trail. This time, though, continue ahead at the junction, following the red blazes. Soon, the trail narrows and bends sharply to the left, then to the right. After these two sharp turns, the trail continues down the mountain on a wide but very rocky path. This route offers no views and is much less interesting than the Curtis-Ormsbee Trail that you used to climb the mountain, but it is also shorter and faster.

In about two miles from the summit, the Wittenberg-Cornell-Slide Trail ends at a junction with the yellow-blazed Phoenicia-West Branch Trail. Turn right and follow the yellow trail along the old woods road for 0.3 mile, then turn left, leaving the woods road, and continue following the yellow blazes back to the parking area where you began the hike. 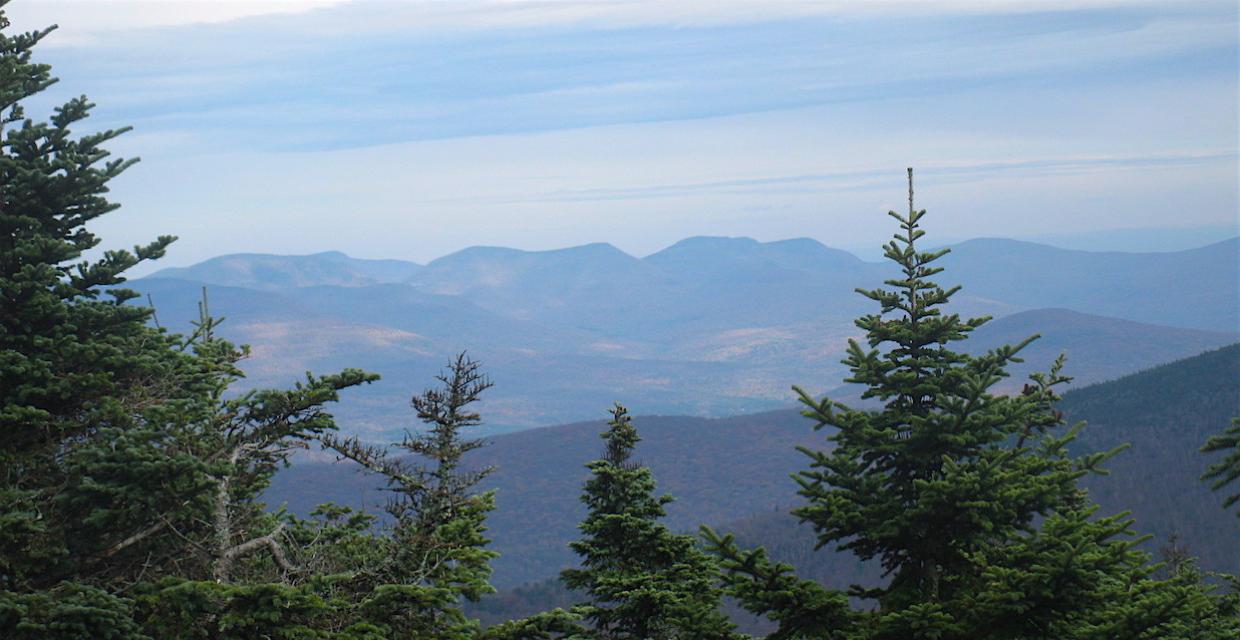 This loop hike climbs to the summit of Slide Mountain, the highest peak in the Catskills, with several outstanding viewpoints.

From the parking area, proceed east on the yellow-blazed Phoenicia-East Branch Trail, which crosses the West Branch of the Neversink River on rocks, and then climbs on a rocky footpath, reaching an old woods road in 0.4 mile. Follow the yellow-blazed trail as it turns right and runs along the level woods road. In another third of a mile...

Take the New York State Thruway north to Exit 19 (Kingston). Proceed west on N.Y. Route 28 for about 30 miles to the hamlet of Big Indian. Turn left and proceed south on County Route 47 for 7.4 miles to a hairpin turn in the road, then continue for another two miles, past the Winnisook Club, to a parking area for Slide Mountain, marked by a wooden sign, on the left side of the road.

rate experience
September 15, 2016
0
Views still exist
<p>The viewpoint from the Curtis-Ormsbee Trail over Table Mountain still exists. There has been some tree growth, but if you head a little to the left, there is a spot where you can still get a panoramic view. &nbsp;I was there this past January, and I have a beautiful unobstructed photo of Table Mountain that I took from this viewpoint. &nbsp;The trick is to turn left and walk along the rock ledge until you reach an unobstructed view. &nbsp;You are correct that the viewpoint from just past the summit of Slide Mountain is largely grown in, but the view over the Blackhead Range from the viewpoint just before the summit of Slide is still unobstructed and spectacular.</p>
Daniel Chazin
September 15, 2016
0
Views
<p>I'm afraid a couple of the views may not what they were in the past due to tree growth. The "<span style="color: #111111; font-family: Verdana, Arial, Helvetica, sans-serif; background-color: #edefd9;">outstanding viewpoint over Table, Lone, Rocky and Balsam Cap Mountains" &nbsp;</span>is a rather disappointing view of their tops. And the final view just past the summit is definitely worth seeing but is significantly blocked.</p>
Jim R
October 21, 2014
0
Approaches to Slide Mountain
<p>Yes, you are correct that the Cornell-Wittenberg-Slide Trail, from its start at the Phoenicia-East Branch Trail to about the 3,500-foot elevation, is very rocky and a relatively unattractive route. &nbsp;It is the old road formerly used to access the fire tower and was not built as a trail. &nbsp;That is why the hike described above uses the Curtis-Ormsbee Trail to climb Slide Mountain. &nbsp;This is a far more interesting and attractive route. &nbsp;Unless you just want to get to the summit and back by the quickest route (and it seems that most people want to do that), I strongly recommend that you use the Curtis-Ormsbee Trail for the ascent of the mountain. &nbsp;And for those to whom it matters, portions of the Curtis-Ormsbee Trail are actually "runnable"!</p>
Daniel Chazin
More Reviews
Log in or register to post comments