From the western end of the parking area, cross the road and proceed south on the joint Jessup (yellow), Sweet Clover (white) and Highlands (teal diamond) Trails, which climb gently to the crest of a field and then descend to a woods road. To the right, you can see Schunemunk Mountain, which you'll soon climb.

Turn right onto the woods road. In about 500 feet, you'll come to a junction with the white-blazed Sweet Clover Trail. Turn left onto this trail, which continues along a grassy woods road through a field. At the end of the field, it reenters the woods and turns right, passing old stone walls. When the woods road again curves right, follow the white blazes straight ahead. The trail now climbs to cross railroad tracks. This is an active rail line, so be sure to stop, look and listen for approaching trains before crossing.

On the opposite side of the tracks, the trail briefly turns left, then immediately turns right and begins a steady climb of the mountain. After a while, the trail levels off and emerges at the edge of a ravine, with views to the east. It then bears right and climbs more steeply. It levels off again, crosses a tributary stream, then passes another east-facing viewpoint. 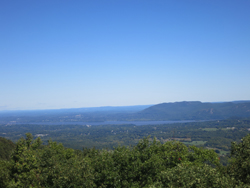 After crossing the northern branch of Dark Hollow Brook, you'll reach a panoramic viewpoint from open rocks. You're now high enough on the mountain to see the Hudson River to the northeast, and the East Hudson Highlands beyond. North and South Beacon Mountains can be identified by the towers on their summits.

You'll soon pass another viewpoint and, just beyond, reach a junction with the yellow-blazed Jessup Trail (also the route of the teal-diamond-blazed Highlands Trail). Turn left at the junction and head south along the summit ridge, formed of conglomerate rock outcrops studded with pebbles of white quartz and pink sandstone. This unusual rock has been smoothed by glacial action, sometimes resembling a level sidewalk, and pitch pines grow out of cracks in the rock. Along the way, you'll pass two more spectacular east-facing viewpoints.

Just beyond the second viewpoint, you'll reach a junction with the black-on-white-blazed Dark Hollow Trail. This will be your return route, but you'll want to continue ahead for another third of a mile on the Jessup/Highlands Trail. After passing through dense mountain laurel thickets, the trail emerges on a large expanse of conglomerate rock, with cairns and white blazes pointing right to the Megaliths. Continue ahead on the yellow-blazed trail for a short distance to the 1,664-foot-high summit of Schunemunk Mountain (marked on the rock with white paint), which affords a 270-degree view to the west and northeast.

Retrace your steps to the junction with the white-blazed side trail, and follow this short trail (also marked by 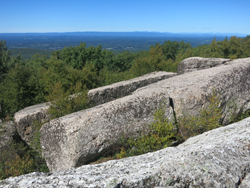 cairns) to the Megaliths - a group of huge blocks that have split off from the bedrock. You'll want to take a break here, as the interesting geologic features are complemented by a fine viewpoint to the west.

When you feel rested, return to the Jessup/Highlands Trail, turn left and continue back to the junction with the black-on-white Dark Hollow Trail. Turn right onto this trail, which crosses several intermittent streams and soon begins a steady descent. The first part of the descent is quite steep, after which the trail crosses Dark Hollow Brook, bears left and reaches a short level stretch. Just before the descent resumes, there is another great view to the east and northeast over the Hudson River and East Hudson Highlands. 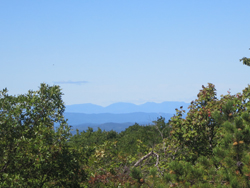 After another steep stretch, you'll cross a brook and bear left again. Soon, the trail joins a woods road, which it follows for most of the remainder of the descent. At one point, the trail proceeds straight ahead, cutting off a loop of the road. The final viewpoint of the hike is reached as the trail begins a steep descent to rejoin the woods road.

The Dark Hollow Trail ends at the base of the descent, just before the railroad tracks. Turn left onto the red-blazed Otterkill Trail, which descends to cross Dark Hollow Brook below an attractive waterfall, then climbs to reach a junction with the white-blazed Sweet Clover Trail. Turn right onto the Sweet Clover Trail and cross the railroad tracks. Continue to follow the Sweet Clover Trail as it descends through the woods, turns right onto a woods road, then bears left and follows a grassy road through a field. When you reach the junction with the yellow-blazed Jessup Trail, turn right, then left, following the joint Sweet Clover/Jessup Trails back to the parking area where the hike began. This loop hike climbs to a ridge composed of unusual conglomerate rock, with many viewpoints from open rock ledges dotted with pitch pines.

From the western end of the parking area, cross the road and proceed south on the joint Jessup (yellow), Sweet Clover (white) and Highlands (teal diamond) Trails, which climb gently to the crest of a field and then descend to a woods road. To the right, you can see Schunemunk Mountain, which you'll soon climb.

Turn right onto the woods road. In about 500 feet, you'll come to a junction...

Take the New York State Thruway to Exit 16 (Harriman). Proceed north on N.Y. Route 32 for about seven miles to the Village of Mountainville, and turn left onto Pleasant Hill Road (County Route 79) at a large sign for the “Black Rock Fish & Game Club.” At the bottom of the hill, turn left again onto Taylor Road, then bear right and cross the bridge over the Thruway. The trailhead parking area is on the right side of the road, just beyond the junction with Creekside Lane.

Short Line bus goes to Mountainville and makes a stop at Angola Road and Route 32. Cross Route 32 at the large sign "Black Rock Fish & Game Club" and head downhill on Pleasant Hill Road (County Route 79). At the bottom of the hill, turn left onto Taylor Road, then bear right and cross the bridge over the Thruway. The trailhead is on the left side of the road, just beyond the junction with Creekside Lane and opposite the trailhead parking area on the right.

rate experience
April 29, 2018
4
Schunemunk w-y-bk (04/28/18)
Beautiful views, don't skip the Megaliths. Breezes kept the bugs in check. Dog (part billy goat) did well with the scrambles but was not keen on the constant gun fire from the local shooting range.
erijonesie
June 21, 2017
5
Great hike. Views are amazing
The views along this hike are amazing. The ascent is very difficult but well worth it. Once you get to the top of the ridge its smooth sailing all the way home. As another hiker pointed out, the blazes along the ridge trails can be a bit sparse. Make sure to follow the rock piles whereever you are going. If you come to a metal sign on a large rock clearing, you are at an important junction. On the right is the megaliths, just forward is the 1664 peak.
bromli
October 18, 2013
0
Wish I had more time up top!
This is an excellent all around hike. The directions are accurate and the markers are clearly visible throughout the hike. The Puddingstone Conglomerates were a real treat and it was great to see so many Pitch Pines in one place! The view from the Megalith's is absolutely fantastic. Will do this next year when the days are longer to get the most out of this mountain. Thanks again for the directions and descriptions!
Sully
More Reviews
Log in or register to post comments