NOTE:  The trails in the Teaneck Creek Conservancy are closed for ecological restoration until the fall of 2021.

The Teaneck Creek Conservancy is a 46-acre tract that is now a part of Overpeck County Park. Once used as a dump for debris generated during the construction of the nearby interstate highways, the area has been rehabilitated and a trail system constructed. For the most part, the dense vegetation screens the adjacent developments from view, and even the noise from the nearby highways is often drowned out by the chirping birds. At times, it is hard to believe that you are in the midst of densely developed Bergen County!

All trails in the conservancy are nearly flat, and the Red Trail is handicapped-accessible. The loop described below includes the Green Trail, portions of which are relatively narrow, but it is possible to fashion a slightly shorter loop by combining the Red and Blue Trails, both of which are suitable for strollers and wheelchairs. 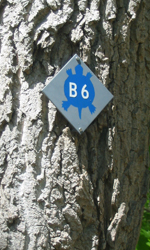 Although the trails in the conservancy are designated with different colors, they are not blazed in the traditional manner. Colored turtle-shaped tags, referred to as “blazers,” are placed along the trails in designated locations, but they are not always visible as one walks along the trails. Despite the small size of the conservancy, it is easy to lose your way if you are not familiar with the area, so be sure to take a map along.

Near the southeast corner of the parking lot, descend wooden steps and turn right onto the Red Trail. (To avoid the steps, you can use a path that begins at the end of Puffin Way.) On your left, you will notice several concrete plaques – formed from rubble that was dumped in the area – on which information regarding various species of migratory birds that frequent the area has been inscribed.

After crossing a bridge, you’ll pass on the left the entrance to the Dr. Ben Burton Butterfly Garden. Just beyond, you'll notice an interesting silver maple tree with numerous trunks.

At the next intersection (just beyond a bridge), bear left (the path to the right leads to DeGraw Avenue). Although no blazes are visible here, the map indicates that you are now following the Green Trail. Then, after crossing two more bridges, bear right onto a narrower footpath and continue on the Green Trail.

Just before reaching the next bridge, turn left onto a path that leads to a gate in a fenced area, known as the Laybrinth. Here, chunks of concrete (“rubblestone”) have been arranged to form a circle in the center. Along the sides are several animal figures that have been carved into tree trunks, as well an elaborate wooden teepee frame. You’ll want to spend a few minutes here to examine these interesting features..

Return to the Green Trail and turn left. This section of the Green Trail, which follows a winding footpath through a forested area, has a more natural appearance than the other trails in the Conservancy.

At the next intersection, turn left onto the Red Trail, passing a color trail map on the left. Just beyond, you’ll reach the Five Pipes – huge sections of concrete piping, left behind during the construction of 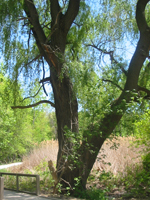 the nearby interstate highway. These pipes have been painted by students with scenes depicting the various natural features of the area and the human relationship to the land in several historical eras. This section of the Red Trail follows the route of the Public Service trolley line that operated between 1899 and 1938, connecting Paterson with Edgewater (where a ferry took passengers to New York City). A section of the trolley rail has been placed adjacent to the trail.

Continue ahead on the Red Trail to the next bridge. Here, on the right, is Dragonfly Pond, where you may observe various species of wildlife during the warmer months (the pond may be dry during periods of drought). Now retrace your steps to the Five Pipes and the map, and turn left, crossing a bridge. Teaneck Creek is on your right, and the Glenpointe development is visible through the trees beyond. You’ll pass some more huge willow trees on the left.

At the next intersection, there is a bridge on the right, but you should bear left and continue on the Blue Trail. Follow this trail to its end at Puffin Way. The parking lot where the hike began is just ahead. 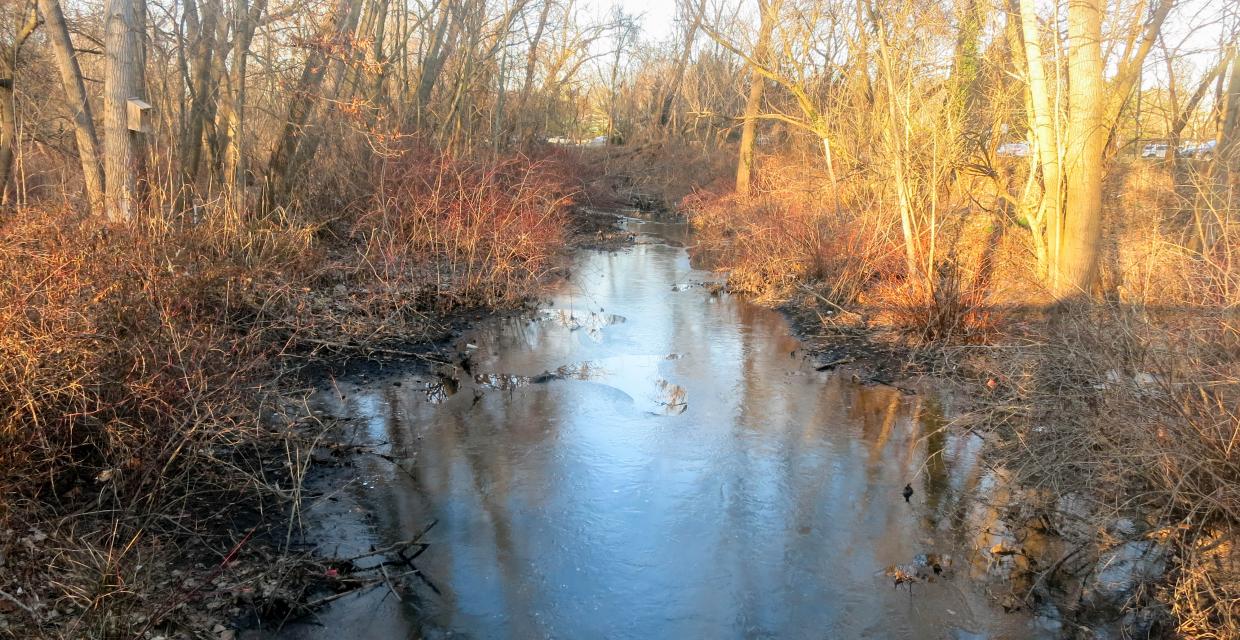 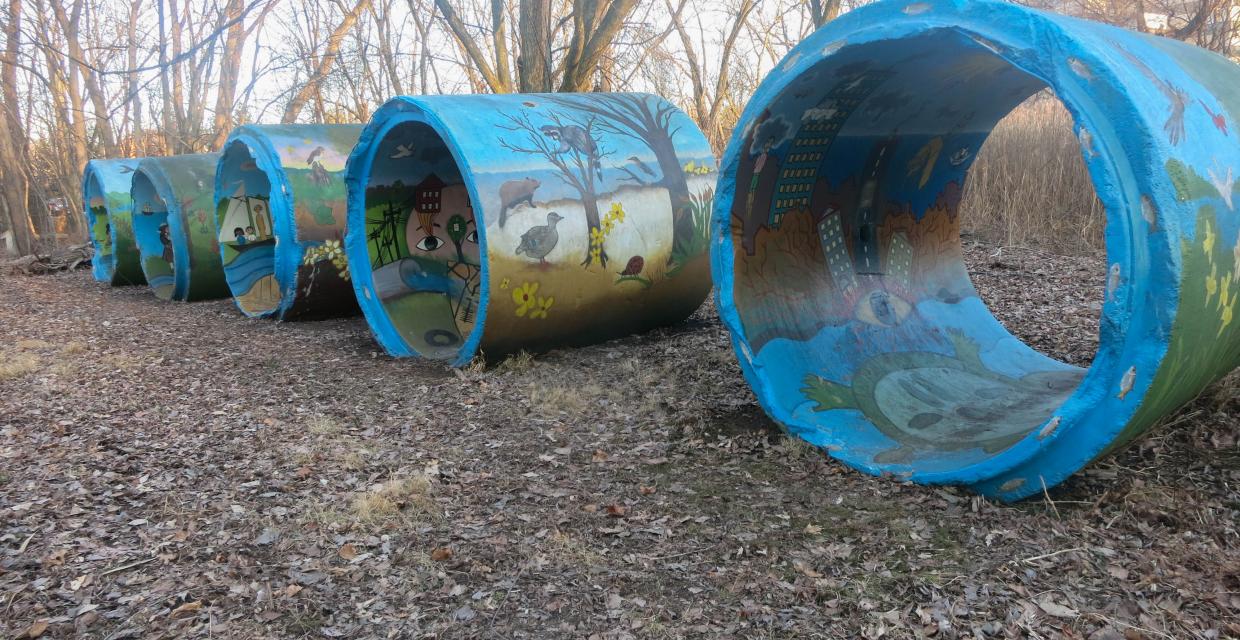 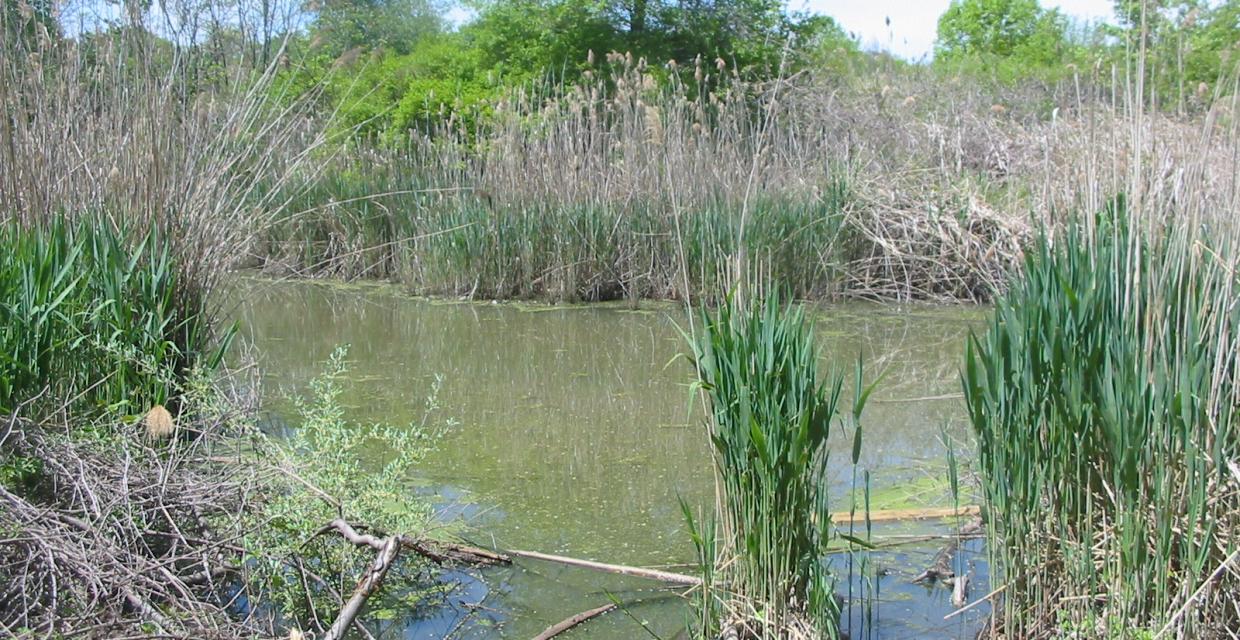 This hike traverses an interesting wetland located in the heart of Bergen County.

NOTE:  The trails in the Teaneck Creek Conservancy are closed for ecological restoration until the fall of 2021.

The Teaneck Creek Conservancy is a 46-acre tract that is now a part of Overpeck County Park. Once used as a dump for debris generated during the construction of the nearby interstate highways, the area has been rehabilitated and a trail system constructed....

Take Interstate Route 80 to Exit 70 (Teaneck). Continue on DeGraw Avenue uphill to Teaneck Road (the second traffic light) and turn right. Turn right again at the next intersection (Puffin Way, the eastward continuation of Oakdene Avenue), proceed to the end of the street, and turn right into the parking lot for 20 Puffin Way (although a sign indicates that parking is for “tenants only,” the parking lot may be used by visitors to the Teaneck Creek Conservancy).

rate experience
September 23, 2019
4
Secret oasis
If it weren't for knowing these walking trails are here, you'd never know they're there. Tucked away in the woods off the side of DeGraw and Rt 80 is a little natural oasis. All the paths are easily walked, even if a bit muddy (depending on weather) in some areas. The paths are easy to follow and it's impossible to get lost. There are few art installations sprinkled throughout.
just_zoshin
January 30, 2011
0
Teaneck Creek Conservancy!
Great description! I just wrote a blog on Teaneck Creek Conservancy (it's wetland restoration program, artwork, etc.) Check it out here: http://njurbanforest.com/2011/01/26/teaneck-creek-conservancy/
Veryape80
Log in or register to post comments