From the kiosk at the end of the parking area, continue downhill along McCaffrey Lane for 500 feet. Just beyond a bridge over a stream, turn right onto the Red Trail (marked by a triple-red blaze on a tree). 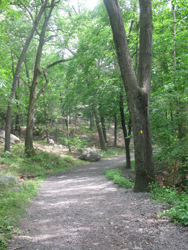 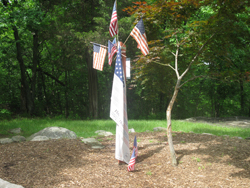 . Near the top, you’ll notice a flag, placed as a memorial to the tragic 9/11/01 terrorist attack on the World Trade Center. A rock ledge to the right of the memorial affords a panoramic east-facing view, with the New York City skyline visible in the distance on a clear day. On 9/11/01, the twin towers of the World Trade Center were visible from here, and today you can see the Freedom Tower, which replaced them.

A grassy clearing on the left, with picnic tables, marks the high point of the Tourne (897 feet). Continue ahead on the gravel road, which descends steadily, passing interesting rock formations on the hillside to the left. 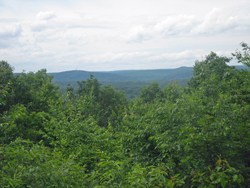 At the base of the descent, the yellow-blazed DeCamp Trail turns left, but you should turn right onto the Red Trail, which leads in about a quarter of a mile to a parking area, with a handicapped restroom. Turn left, continuing to follow the red blazes, and cross the park entrance road by a yellow gate.

The Red Trail, which you’ll follow for the rest of the hike, now enters the less-used southern section of the park. It gently climbs to the crest of a rise, then descends. At the base of the descent, it crosses the Pink Trail. After climbing a little, the Red Trail descends to cross the Purple Trail. It then ascends on switchbacks to reach a high point (711 feet) with several cedar trees – the halfway point of the hike.

The Red Trail now turns sharply left and descends on switchbacks, passing an interesting glacial erratic along the way. At the base of the descent, it turns left, soon passing a vernal pool on the right. Here, it briefly joins the Purple Trail, which comes in from the left. In 100 feet, the Red Trail turns right, leaving the Purple Trail, and climbs slightly to a ridge that overlooks a valley on the left.

After descending once more, you’ll come to a junction, where you should turn left, following the sign to "Tourne." Once again, the trail runs along the edge of a ridge, overlooking a ravine on the left. It then descends, bears left at a fork, and reaches a five-way intersection. Continue straight ahead on a gravel road, crossing the Ogden Trail – a wide dirt road, built in 1898 for a proposed railroad but never actually used as such – and pass Birchwood Lake, visible through the trees on the right. 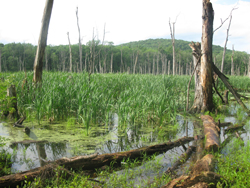 rail bears left at a bench. It follows a relatively level but somewhat rocky route for a third of a mile and then joins the blue-blazed Swamp Trail for about 500 feet. At a fork, where the Swamp Trail leaves to the right, bear left to continue on the Red Trail. After climbing a little, the Red Trail descends on a woods road. On the way down, the Swamp Trail again joins for 500 feet, then departs to the left. At the base of the descent, the trail approaches the edge of Rattlesnake Meadow – a fascinating wetland, filled with dead trees.

At the end of Rattlesnake Meadow, the Red Trail continues ahead on a gravel road, as another gravel road leaves to the left. Just ahead, it bears right at a fork. In 0.2 mile, the Red Trail ends opposite the parking area where the hike began. This hike climbs to the top of the Tourne, with panoramic views, loops around the southern section of the park, and passes an interesting wetland.

From the kiosk at the end of the parking area, continue downhill along McCaffrey Lane for 500 feet. Just beyond a bridge over a stream, turn right onto the Red Trail (marked by a triple-red blaze on a tree).

You'll immediately go through a gate in a chain-link fence and enter the Wildflower Trail area, where the trail curves sharply left. Continue for another 500 feet on the Red Trail...

Take I-80 to Exit 43 (Mahwah/Morristown/I-287), then take Exit 43B onto I-287 North. Take the first exit, Exit 43 (Intervale Road), and turn left at the top of the ramp. Cross over I-287 and turn right at the traffic light onto Fanny Road. At the second stop sign, reached in 0.9 mile, bear right, following the sign to "West Main Street," then bear left at the next fork onto County Route 618. In 0.2 mile, at a sign for "Tourne County Park," turn left onto McCaffrey Lane and proceed for 0.2 mile to a parking area on the right.

rate experience
January 01, 2017
5
Great hike and park
Did this hike in mid october. Directions were accurate and on point. Views from the top of the torne were great and NYC was visible. Trail was clean and well marked. There are maps at the kiosk which help with navigation. Morris county publishes an online map that can be found here http://morrisparks.net/assets/images/PDFs/Maps_Floor_Plans/Tourne_Trail_Map_FULL_COLOR_web.pdf
bromli
October 03, 2013
0
Beautiful Park
<p>I hiked this area on Sunday, September 29, 2013.&nbsp; Be aware that HUNTING IS ALLOWED in this park except on Sundays.&nbsp; Here's a different hike from the one above:&nbsp;&nbsp; take the Green Trail across McCaffery Lane up the hill if you want a short loop of about 0.5 miles.&nbsp; When that is completed, you can pick up the Red Trail immediately back into the park.&nbsp;</p>
lina_rph
October 27, 2012
0
Wildflower Area can be bypassed
<p>If you are hiking with a dog, it is possible to bypass the short section of the Red Trail through the Wildflower Area by just staying on the road for a short distance, then turning right to pick the DeCamp Trail.</p>
Daniel Chazin
More Reviews
Log in or register to post comments