Towards the rear of the parking area (just before a cable gate), you'll notice a triple red-dash-on-white blaze that marks the start of the Tuxedo–Mt. Ivy Trail. Follow this trail uphill on a wide dirt road, then bear right at the power line clearing and continue along a dirt road parallel to the power lines for about 0.2 mile. As the road crosses under the power lines, you’ll come to a Y-junction, where you bear left and head uphill. A short distance beyond, follow the trail as it turns right and enters the woods.

The Tuxedo–Mt. Ivy Trail now ascends gradually on an old woods road. After crossing a stream on rocks, the road becomes rockier. Watch carefully for a left turn and follow the red-dash-on-white blazes as the trail leaves the road it has been following and continues to climb rather steeply on another old woods road. Near the top of the climb, the trail bears right and continues on a footpath.

Just below the summit of Eagle Rock, the trail reaches a limited viewpoint, with Limekiln Mountain visible to the north and the Hudson River to the east. Beyond the viewpoint, the trail continues to climb more gradually.

Soon, you'll reach a T-junction. The Red Arrow Trail, which will be your return route, begins on the right, but you should turn left to continue on the Tuxedo-Mt. Ivy Trail, which now descends gently. After climbing a little, the Tuxedo-Mt. Ivy Trail reaches a junction with the yellow-blazed Suffern-Bear Mountain Trail at the height of land, with an interesting rock outcrop on the right and an old stone fireplace on the left.

The Tuxedo–Mt. Ivy Trail now levels off and passes through dense mountain laurel thickets. In about half a mile, it reaches a T-junction with a woods road known as Woodtown Road. Here, the trail turns right, crosses a wooden footbridge over a stream, then turns sharply left. The trail now climbs on an old woods road, which soon levels off.

After crossing another stream on rocks, you'll notice the Green Swamp on the left. Towards the end of the swamp, after a short climb, follow the Tuxedo–Mt. Ivy Trail as it turns right, leaving the woods road it has been following. A short distance beyond, a triple white blaze on the right marks the start of the Breakneck Mountain Trail. 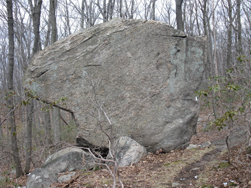 Turn right and follow the Breakneck Mountain Trail along the ridge of Breakneck Mountain. Soon, the trail passes West Pointing Rock, a large boulder with a sharp projection on its west side. The trail often emerges onto open rock slabs. At one point, it passes between two glacial erratics as it traverses an open rock slab. As the trail approaches the northeastern end of Breakneck Pond, the pond can be glimpsed through the trees to the left.

A short distance beyond, the Breakneck Mountain Trail ends at a junction with the yellow-blazed Suffern–Bear Mountain Trail. Continue straight ahead, following the yellow blazes downhill to the right toward the Third Reservoir.

After passing the western end of the reservoir, the trail climbs over Ladentown Mountain and descends to Woodtown Road. It crosses the road and a stream and soon reaches a junction with the Red Arrow Trail. Turn left onto the Red Arrow Trail, which skirts the edge of a swamp. After climbing a little, the trail descends. It bears right at a fork, then bears right again and continues uphill on a woods road.

Soon, you'll reach the end of the Red Arrow Trail, marked by a triple blaze. Turn left onto the Tuxedo–Mt. Ivy Trail and follow it downhill to your car, now retracing the route you followed at the start of the hike. Towards the rear of the parking area (just before a cable gate), you'll notice a triple red-dash-on-white blaze that marks the start of the Tuxedo–Mt. Ivy Trail. Follow this trail uphill on a wide dirt road, then bear right at the power line clearing and continue along a dirt road parallel to the power lines for about 0.2 mile. As the road crosses under the power lines, you’ll come to a Y-...

Take the Palisades Interstate Parkway to Exit 13 (US 202/Haverstraw/Suffern). Turn right at the bottom of the ramp, then turn right again onto US 202 West and continue for 1.7 miles to a junction with NY 306. Turn right onto Old Route 306, then right again at the next stop sign. In 0.2 mile, turn left onto Mountain Road; then, in another 0.2 mile, turn left again onto Diltzes Lane. Continue on Diltzes Lane for 0.2 mile and turn right into a gravel parking area.

The Short Line bus from the Port Authority Bus Terminal in New York City to Bear Mountain stops at the intersection of Routes 202 and 306 in Pomona, N.Y. (the bus timetable designates this location as Pomona Heights, N.Y.).  From the bus stop, folllow the driving directions to the trailhead (the distance from the bus stop to the trailhead is about 0.7 mile).  For more information, go to www.coachusa.com/shortline and look for the schedule for the New York City-Bear Mountain bus.

rate experience
March 02, 2020
5
Wonderful hike on a sunny March day
The detailed description of this trip with key turns and landmarks in this trip report was very helpful. My wife and I finished this 7.1 mile hike in less than 5 hours including breaks. While the hike was strenuous with steep ascents and descents on rocky terrain in many places, it also provided much needed relief on soft terrain covered with autumn leaves as the trails passed through Mt Laurel bushes.
rkavva60
December 08, 2019
4
Great early Dec hike !
Probably the best (winter) hike ever ! The park had a nice 3-4" snow cover and the temps were in the low 30's with no wind and mostly sunny. The initial climb is strenuous but it levels out and the remainder of the hike is relatively easy. The snow cover was never an issue as there was no icy spots to navigate due to the low temps since the snowfall. Only saw a total of 5 hikers all day. There are a few nice views while passing the lakes and ponds but no real overlooks. Still, this is a great 7 mile trek. I had a difficult time figuring out the red arrow trail head...I didn't see a cairn and the markings on the tree are easy to miss. In addition there is a solid white blaze on a tree at the start of the red arrow trail that I assume does not belong there.
rdgee65
May 25, 2015
0
Misplaced marker along power lines
<p>We did this trail yesterday. &nbsp;Just as the trail bears left, we also noted a red dash on white marker on a tree going straight on the right so kept going until we realized we missed the turn. &nbsp;Ignore this marker</p>
rjtivey
More Reviews
Log in or register to post comments