A Landscape Worth Defending: The New Jersey Palisades.

In October 2012, the Borough of Englewood Cliffs, NJ, amended its zoning code to permit construction of buildings 150 feet in height in an area along the Palisades Interstate Park. The limit was previously 35 feet. The change would detrimentally impact this iconic and environmentally sensitive landscape. The park is listed as a National Historic Landmark and the Palisades are a National Natural Landmark. The suit was prompted by a proposal to build a new, 143-foot tall headquarters for LG Electronics. Read more.

Watch "The Perils to the Palisades" video to learn more about the rich natural and historic heritage of the Palisades cliffs.

June 23, 2015: LG Electronics USA announced a redesign of its proposed new headquarters overlooking the Palisades in Englewood Cliffs, N.J., reducing the height of the tallest building from 143 feet to the tree line, at 70 feet. The settlement is an amicable ending to a three-year battle in which the New York-New Jersey Trail Conference played an early and leading role within a coalition of environmental and civic groups and thousands of private citizens opposed to the high-rise development in its proposed form.
August 13, 2014: The Englewood Cliffs Council unanimously adopted Ordinance 14-11 which restores the traditional zoning to Englewood Cliffs, limiting building height to 35 feet. LG can still build to 143 feet as a result of its variance, and similar variances are possible in the future. However, the Council's action may strengthen the opposition's case challenging the legality of LG's variance, now pending in appeals court, and shows that the people can affect the actions of government when they care. The 4-0 vote by the council, which the mayor says he will not veto, also cancels the planned public referendum on the issue in November. Efforts to persuade LG to reduce the height of its planned building will continue unabated.

June 5: Hearing in Trenton on bill to restrict building height on the Palisades. 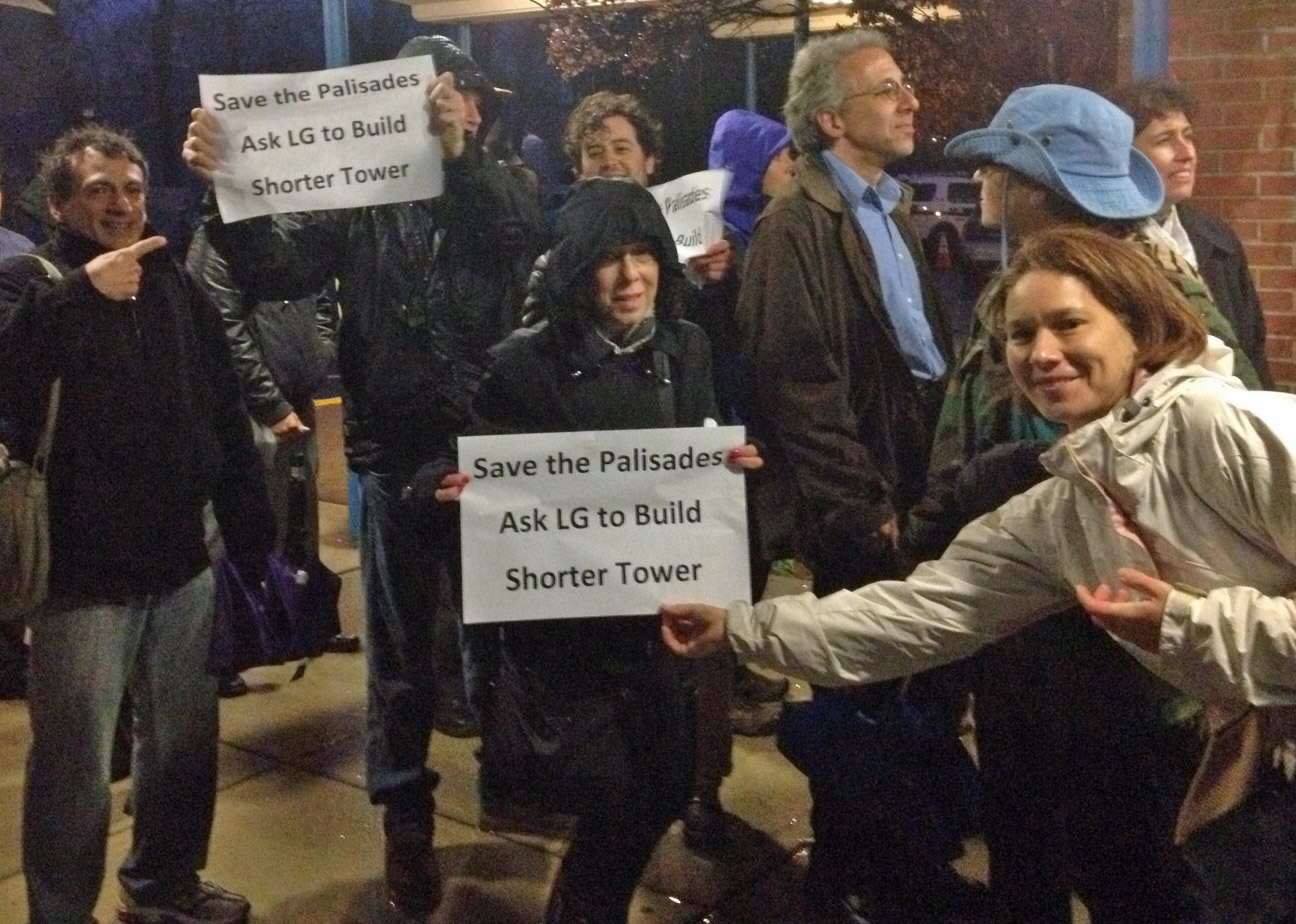 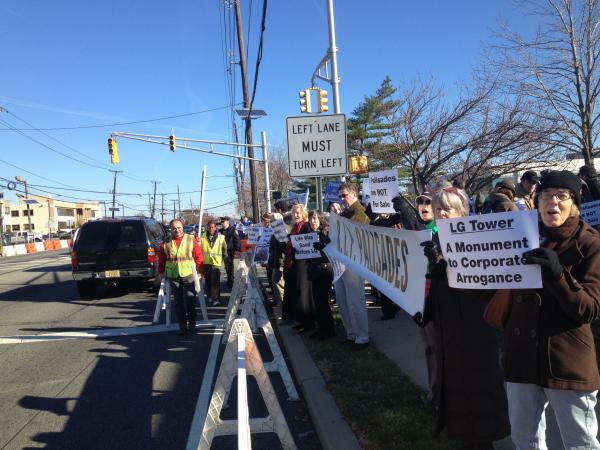 Mourning the Death of a Historic Landscape? On November 14, 2013 at 9:30 AM  more than 40 people turned up to protest LG Electronics breaking ground on its new corporate headquarters in Englewood Cliffs, NJ. The demonstration was quite the spectacle, with dozens of signs and even a rented hearse going back and forth in front of the building site, drawing attention to the death of the historic view of the Palisades. A steady stream of honks, waves, and cheers from passing vehicles showed beyond a doubt that the views of the protesters were shared by many of those who pass the site every day.

The proposed building still has to go through an appeals process before construction begins, but even if it does come to pass, this outpouring of public support for the Palisades was a powerful expression of public sentiment.

We understand LG may not have been aware of the 100-year-long legacy of preserving a precious landscape by citizens of both states.

This treasured landscape’s setting, respected for more than a century as a public trust, would now be violated for private gain by this giant maker of TVs and refrigerators seeking to display its brand.

Yet on its large 27-acre site, LG could provide the same amount of office space for the same number of jobs by choosing an alternative lower design that does not rise above the ridgeline. But so far, LG refuses to reconsider.

I join other protectors of the Palisades and urge LG Electronics to redesign its new office which, if built as currently planned, would desecrate an iconic American landmark.

December 23: 2013: Opinion: Still time for LG to reconsider (published in The Record) 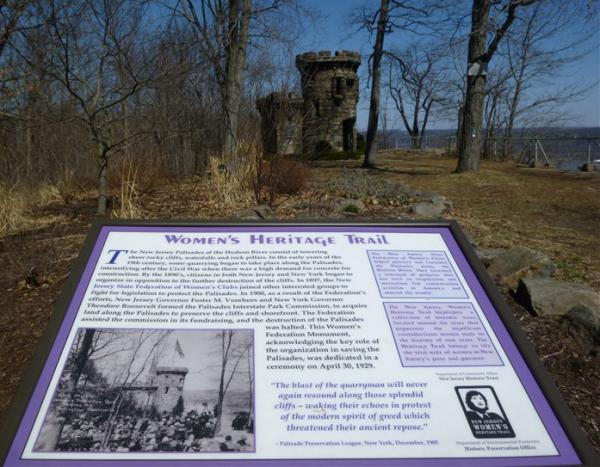 May 8, 2013: Women's Clubs' members to rally May 11 for continued preservation of the Palisades

May 7, 2013: Protect the Palisades takes full-page ad in NY Times

April 17, 2013: Creskill Woman's Club Calls for Protection of "Our Palisades"

March 25, 2013: Urge LG Electronics to respect our National Historic and Natural Landmark along the Palisades.

December 11, 2012: The Trail Conference Board of Directors voted to join a lawsuit against the Borough of Englewood Cliffs by the New Jersey State Federation of Women's Clubs, Scenic Hudson, and two Trail Conference members.

See this excellent story, A view to behold, now to change?

Visit our coalition's website, Protect the Palisades for links to additional news stories and more.

Keep up the Pressure on LG to build LOWER

Permalink Submitted by Visitor (not verified) on Sun, 08/24/2014 - 12:15
This is still a victory for LG if they are allowed to continue to build their skyscraper and disfigure the Palisades.  If so, they will be the only "tower" north of the GW Bridge, the precise visibility they appear to be craving.