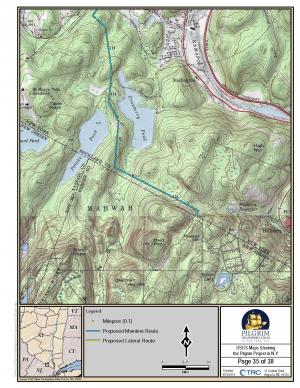 Say "no!" to the Pipeline: Take action today.

What is the Pilgrim Pipeline?

The Pilgrim Pipeline would, in fact, be two parallel pipelines running 178 miles between Albany, N.Y., and Linden, N.J. If the project is approved, the first pipeline would carry Bakken shale oil from Albany south, and the second would carry refined products, such as kerosene, from Linden back north for distribution. Bakken oil is highly volatile, and has been at the center of numerous train disasters over the past few years. The refined products, should there be a leak or explosion, are even more volatile and toxic to humans and the environment.

The pipeline would pass through 30 towns in five New Jersey counties and 25 municipalities in six New York counties. It would disrupt large tracts of environmentally sensitive lands in the upper and lower Hudson Valley, the eastern edge of the Catskills, and the New Jersey Highlands, which supplies water to over 5 million residents in northern New Jersey. Based on the proposed route of the pipeline, the water supply of Mahwah, N.J., where Trail Conference Headquarters is located, would be put in direct risk of contamination.

Say "no!" to the Pipeline: Find out how to get involved. 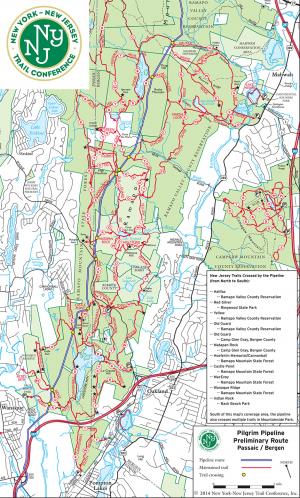 Why is the Pilgrim Pipeline a bad idea?

The Pilgrim Pipeline would directly and negatively impact several trails we maintain for the public to enjoy. That is why the New York-New Jersey Trail Conference is proud to be a founding member of the Coalition Against Pilgrim Pipeline. In Bergen and Passaic counties, the pipeline would intersect 11 trails maintained by the Trail Conference, with the clear cutting of forest and construction of the pipeline permanently altering these footpaths. Wildlife and plant life would also suffer, due to increased fragmentation of the forests along the pipeline route, causing more sunlight, wind, and the potential for invasive species being introduced into those ecosystems.

Pilgrim is a private company, NOT a public utility. Pilgrim’s claims that this project would be good for the region have been refuted. While Pilgrim stands to make tremendous profits, it is the communities along the route that would bear all of the risk to their drinking water, public health, and safety.

Who else opposes the Pilgrim Pipeline?

How can I get involved?

You can help stop this unnecessary and dangerous project by signing petitions, contacting your elected officials, and signing up to receive action alerts. Visit www.stoppilgrimpipeline.com for more details.

3/31/16: There are two critical actions you can take right now to help the fight:

1. If you are a Bergen County resident, call and email your mayor and ask him/her to contact County Executive James Tedesco and Freeholder Chair Steven Tanelli and urge them to rescind survey permission for the Pilgrim Pipelines.  Tell you Mayor...

"Please contact Bergen County Executive Tedesco and Freeholder Chair Tanelli and ask them to rescind survey permission for the Pilgrim Pipelines. The pipeline would cut through the Ramapo River Aquifer, one of Bergen Counties largest water sources, and a major oil spill in this region would create a water crisis for all of Bergen County. Stopping the survey is the single most important thing Bergen County can do to prevent this pipeline proposal from going any further.  The NJ State Department of Green Acres has confirmed the County has the authority to stop the survey, and we need our Bergen County representatives to act on this authority now."

2. Regardless of where you live, join us for the next critical opportunity to stop the Pilgrim Pipeline at the Bergen County Freeholder meeting on Wednesday, April 6 at 7:30 p.m. in the Freeholder Public Meeting Room, One Bergen County Plaza, Hackensack, N.J. You can register to speak at the meeting, or simply come be in support of this critical action. RSVP to [email protected], invite your friends and family to attend, and wear red.