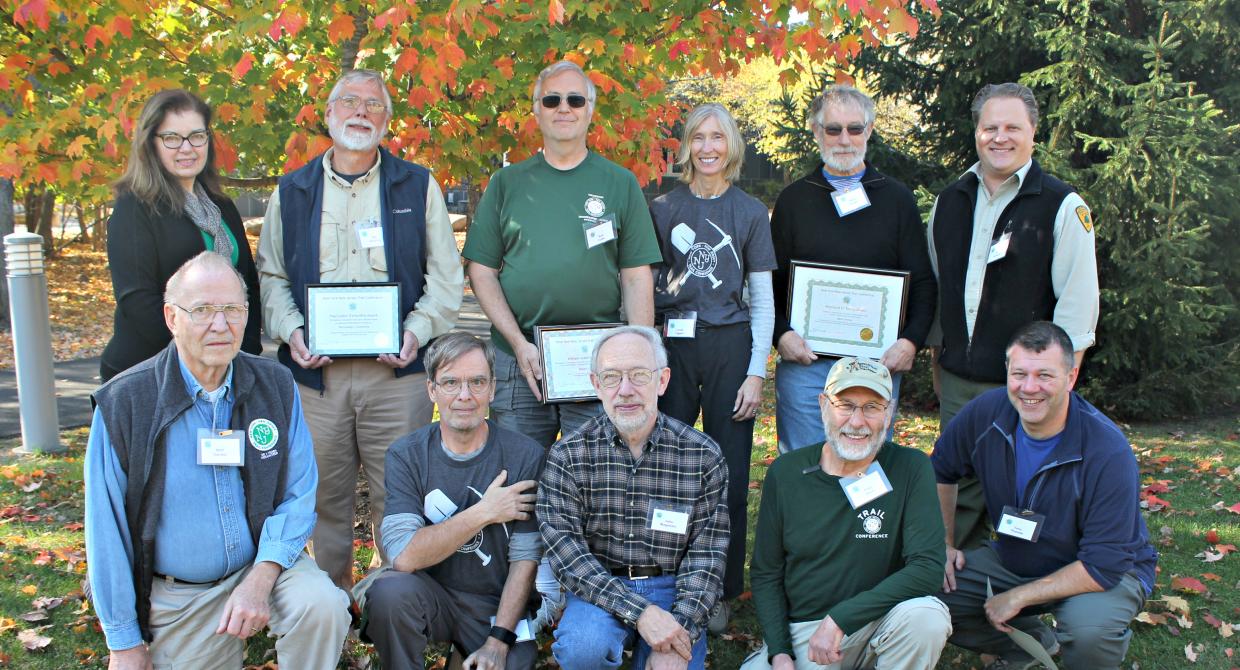 The hard work and dedication of Trail Conference volunteers is unparalleled. Yet their work goes unnoticed by the majority of people who benefit from their service—which, when you think about it, isn’t necessarily a bad thing. When done right, with skill and passion, trail maintenance and construction—as well as facilities management and website development, two other areas of expertise that our invaluable volunteers provide the Trail Conference—become nearly invisible, fading into the landscape to allow people the opportunity to connect with nature.

On Nov. 5, the Trail Conference pulled back the curtain, so to speak, on the remarkable efforts of our volunteers and partners who have gone above and beyond in the service of trails at the annual Volunteer Awards at Ramapo College of New Jersey in Mahwah, N.J. The inspiring bios of the 19 honorees who have dedicated themselves to building, maintaining, and protecting trails and trail lands—including a tribute to Jakob Franke, our dear friend who received the Trail Conference’s highest honor just days before he unexpectedly passed away—can be found below.

A long-time member and supporter of the Trail Conference, Pat joined the Buildings and Grounds Committee in 2015. Pat has put his facilities management experience to good use by working to make our headquarters at the Darlington Schoolhouse energy efficient and by helping to develop the building’s Facilities Management & Operations Plan. Thank you for using your extensive facilities management experience at Trail Conference Headquarters at the Darlington Schoolhouse.

As an avid member of the West Jersey Trail Crew, Steve is known for “going all out.” Often before being asked, Steve is on hand with the right tool to carry out even the most strenuous tasks. Whether the job is small or large, his can-do attitude makes his contributions to the crew invaluable. Thank you for your infallible can-do attitude performing trail work with the West Jersey Trail Crew.

Recognizing those volunteers who have demonstrated exceptional commitment to projects such as a book, map, or advocacy.

Since 2015, the Technology Committee has worked on the redesign and upgrade of the Trail Conference website and database. The Tech Committee has coordinated the entire process, from selecting the web consultants, to working closely with staff and volunteers, to seeing the project through to completion—and beyond. Committee members are:

Thank you for shepherding the upgrade and redesign of the Trail Conference’s website and database.

A member of the Trail Conference since 1980, Bob has held many volunteer positions with the organization. He began working as a maintainer, and became a member of the Long Distance Trails Crew (LDTC) in 2013. The following year, Bob was named a LDTC crew leader. By 2015, he was serving as chair of the West Hudson Regional Trails Council. Bob can always been found speaking with hikers, educating them on the work of the Trail Conference, and encouraging them to join in the fun. Thank you for sharing your love of trails, trail building, and the outdoors with trail volunteers and the public.

Since 2000, Andrew has been active on our trails and as a leader within the organization. He is currently serving as the East Hudson Local Trail Committee chair, overseeing 150 miles of trails. As a crew chief at Wonder Lake, he planned and led a trail-building team. For four years, he was involved with planning and building a 6-mile extension of the South Taconic Trail, which opened in 2015. His effective leadership is illustrated by his crew’s insistence that he lead more projects; as a result, Andrew is now running work trips to improve other trails in the region. Thank you for demonstrating a love of trail work in the East Hudson region and sharing that enthusiasm with trail colleagues.

Recognizing those outside the Trail Conference—for example, state, federal, or local agency partner officials—who have given long and/or significant assistance to the local hiking community.

As the Trail Conference has worked to improve and expand the trail network in Hudson Highlands and Fahnestock state parks, Evan has been an outstanding collaborator for all trail-related activities. Evan designed, built, and installed trailhead signage throughout these parks, which has made it much easier for people to find the trailheads. He communicates frequently about trail plans and is always willing to help out when needed. Thank you for your enthusiastic collaboration with trail projects in Hudson Highlands and Fahnestock state parks.

An eagerness for collaboration makes Josh, the Northern Regional Office Superintendent with NJDEP, a pleasure to work with. He quickly responds to questions and requests to provide letters of support for grants, organizes committees to help guide Trail Conference projects, and makes sure materials are available to complete a project, making him a strong partner in North Jersey. Thank you for providing support with vision and a collaborative spirit to trail volunteers in New Jersey.

The Trail Conference's most prestigious award, given for significant and lasting contributions that protect hiking trails and the land upon which they rest.

Beginning in 1992, when he helped construct the Shawangunk Ridge Trail, Jakob had been a tireless advocate, worker, and leader both on and off the trail. As chair of the Long Path South, he was active along that trail’s entire length, interacting effectively with supervisors, maintainers, park managers, and other officials to further the goals of the Trail Conference. He organized events and work trips from the Shawangunks to the Palisades, taking on major projects. Jakob worked to preserve and protect land for the future. He “walked the walk” when it came to protecting the Palisades from the proposed outsized construction of LG headquarters. He was a plaintiff in the lawsuit, a speaker at meetings, and went door-to-door to educate the public. His influence extended beyond his passion for trails and trail lands to the volunteers he recruited with his friendly, welcoming attitude and infectious enthusiasm. Thank you for being a trail ambassador and charismatic leader whose friendly, welcoming attitude helps preserve land, build trails, and establish relationships with land managers and officials.

Jakob passed away just days after receiving the Torrey Award. Read the full tribute to our friend.