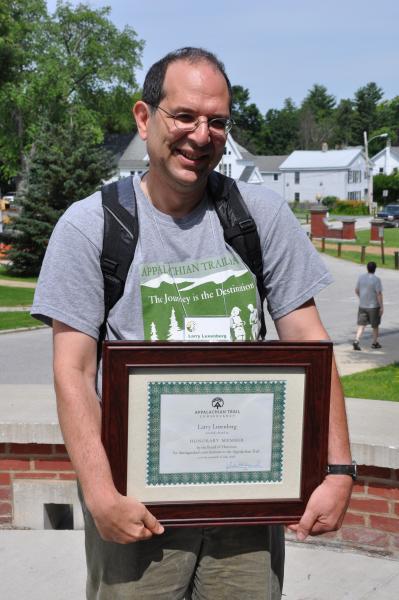 Since completing a thru-hike of the Appalachian Trail in 1980, Larry Luxenberg, a Trail Conference Life Member and resident of New City, NY, has dedicated much of his volunteer time to preserving the history, memories, and stories of the trail and the community that has built up around it. In July, his efforts were recognized by the Appalachian Trail Conservancy with the announcement that he has been made an "Honorary Member" of the ATC. The award was announced by Betsy Thompson, an ATC board member, at the group's biennial meeting in Vermont in July.

The award is given to a select few. Only 51 other people have been designated as Honorary Members by the ATC, among them AT founder Benton MacKaye. The honor recognizes "distinguished contribution to the Appalachian Trail project through service that shall have had an inspirational or exemplary effect because of its special quality, character or innovative aspects rather than simply service of a conventional nature performed in a superior manner."

Larry is the author of Walking the Appalachian Trail (1994), which includes excerpts from 200 interviews he did with AT hikers, maintainers, and land-acquisition pioneers. "During that book writing process," Betsy Thompson said in making the award, "he contributed immeasurably to the early organization of the ATC archives and brought numerous historical facts and sources to the attention of the Conservancy staff and editors.

"Not long after the book project was completed, he conceived of an Appalachian Trail Museum that would preserve and display, for public edification, not only the more memorable tales of the trail from more noted hikers, but also the efforts behind the trail and its management since the 1920s."

Larry is now president of the Appalachian Trail Museum Society, which has found a home for the museum in a 200-year-old grist mill near the trail in Pine Grove Furnace State Park in Gardners, PA. The building is to be renovated this fall and winter and made ready for a grand opening on National Trails Day 2010: Saturday, June 5. (Learn more at www.atmuseum.org.)
Larry is a portfolio manager at Lexington Avenue Capital Investment

25-Year Awards
The ATC also recognized at its meeting volunteers who have contributed long service. The three persons receiving the awards from Pamela Underhill, National Park Service AT Park Office Superintendent, were Robert J. Reardon, Robert F. Marshall, and Jim Haggett. Bob Reardon is the AT maintainer from the Bear Mountain Bridge to South Mountain Pass; Bob Marshall is the AT maintainer from South Mountain Pass to the intersection of Rt 9 and 403; and Jim Haggett is Trails Chair for the Dutchess/Putnam AT Committee.

Further, with the hours tallied through June of this year, Bob Reardon has surpassed the 1,000 hour mark and will soon be presented with a fleece vest provided by the National Park Service. Only 11 other East of Hudson AT NY-NJ Trail Conference volunteers have reached this level of service.

The Trail Conference is a maintaining club member of the ATC. We thank all four of these volunteers for their service and congratulate them for their awards.