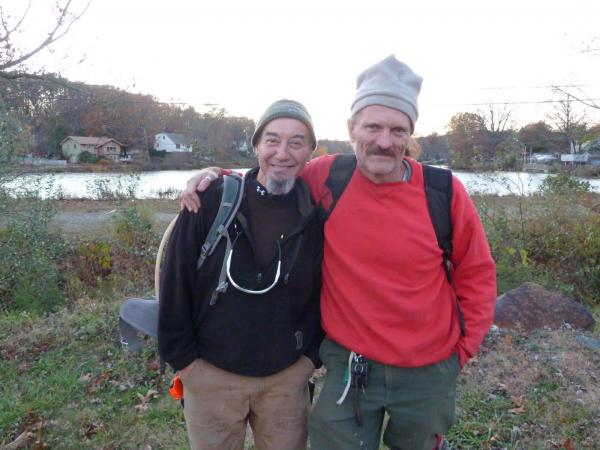 At first impression, Artie Hidalgo and Bob Brunner may seem an unlikely duo. Artie, of Middle Village (Queens), NY, head clean-shaven save for salt-and-pepper chin whiskers, recently retired as a manager with the MTA. Bob, of Bay Shore (Long Island), NY, long locks splaying from under his hat in a barely managed pony tail, retired from 20 years in the landscape construction field (he had his own business) and is now a teacher of math and earth science to home-bound students.

But the two have found common ground as Trail Conference volunteers, in the process learning skills that they now team up to teach to others. In December, the Volunteer Committee gave Artie and Bob Distinguished Service Awards.

Bob landed first, in the spring of 2009. "I had experience in building retaining walls and waterfalls," he says, "but this [rock work] is completely different and much more technical. What is new for me is working with raw stone that needs to be split and shaped, turning something that is directly out of nature into something functional." He became a regular at the project, often dedicating two days a week to volunteer, driving all the way from Long Island to do so. He also put his teaching skills to excellent use as he took on the role of instructor for Trail University stone work courses not only on Bear Mountain, but at Wonder Lake State Park and Minnewaska State Park Preserve.

Artie enrolled in his first workshop at Bear Mountain in the spring of 2010. "I have always been interested in the old ways of doing things and learning dry stack rock construction and doing trail work were on my bucket list," he says. "What I've learned in the last eight months (he was speaking in November) never ceases to amaze me." He too became a regular, in just his first season logging an astonishing 670+ hours of service, setting the record for most hours volunteered in a single year for the project.

"Bob and Artie have the type of spirit that's infectious, volunteers love to work with them because they both honestly love what they're doing," says Project Manager Chris Ingui. "Whenever you witness that kind of work ethic and feel that energy you can't help but get inspired to work alongside them." His confidence in their skills led him to ask that they team up and share their stone work knowledge with a class of new and experienced trail volunteers from various Trail Conference regions. A rehabilitation of the Post Brooks Trail in Norvin Green State Forest (see page x), and the need to build a trail retaining wall, became the occasion for an on-site Introduction to Stonework workshop. Trail Conference Executive Director Ed Goodell, was one of the participants.

"This is a good example of the diffusion of talent and enthusiasm as a dividend of a great project, in this case, the Bear Mountain project," he says. "Bob and Artie gain skills and become workshop instructors in Norvin Green. Participants in their two-day workshop build this cribbed trail over what was once a perennially wet, low spot next to the Post Brook. Outcome: A new, improved trail experience for hikers and new volunteers with construction experience for trail crews."

For Artie and Bob, the pleasures of volunteering are as much about the people they encounter as they are about the skills they learn and work they do. "The caliber of the people that I've had the pleasure of working with at Bear Mountain and Norvin Green-that alone would bring me back," Bob says. "It makes for a great experience."

Artie cites the crew leaders: "Eddie Walsh, Tom Kindling and Chris Ingui have tremendous skill and patience as mentors, they have an ability to touch people skillfully. I am very grateful to the Trail Conference for giving me this opportunity. I love what I do and look forward to doing more."

He'll get that chance in a new way this spring as he and Bob take on another assignment: leading a new roving trail crew for the Trail Conference.