Awards for 2009 Announced by Trail Conference

Awards for 2009 Announced by Trail Conference 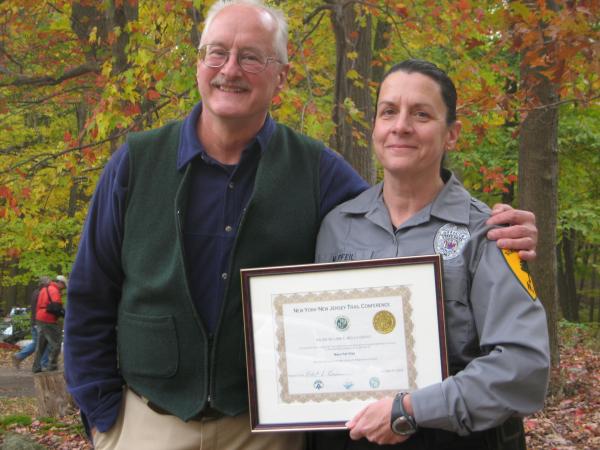 Pfeil has been point person-not to mention the heart and soul-of the New Jersey Appalachian Trail Ridgerunner program, for years. The New York-New Jersey Trail Conference recognized and thanked Pfeil for her work on this program by bestowing on her its Major William A. Welch Trail Partner Award. The award is given to a Trail Conference partner in recognition of long and significant assistance in trail building, trail maintenance, or trail protection.

The Ridgerunner program is a project of the Appalachian Trail Conservancy. In New Jersey, the program is jointly managed by the Dept. of Environmental Protection and the New York-New Jersey Trail Conference. Ridgerunners promote a quality recreational trail experience by talking to visitors about the Appalachian Trail and its intended primitive experience, its location, regulations, and traditions, as well as ways they can minimize their impact on the Trail. Ridgerunners also provide a valuable service to maintaining club volunteers and land managing agency personnel, by reporting back to them about the conditions they encounter while on the Trail.

Pfeil has strong roots in the Ridgerunner program. She was the first Ridgerunner in New Jersey when she hit the trail in 1992. She returned for a second year in 1993. In 1997, Pfeil was hired as a park ranger, and in 1998, she graduated from the NJ State Police Academy, Basic Police Class. She has served as the point person for the Ridgerunner program in New Jersey, handling the interview process, instituting regular meetings between the runners and park staff in the region, and organizing outreach events for local user groups.

Larry Wheelock, special projects manager at the Trail Conference, has worked with Pfeil on the Ridgerunner and other programs since 1998. "Mary-Pat is extraordinarily dedicated to parks, trails, volunteers, and users. She works hard to bring people together and to create productive and satisfying relationships. The result is better trails throughout Worthington State Forest and better experiences for trail users. The Trail Conference thanks her for her commitment."

Recognizes and given after long years of service to the Conference

Walt Daniels of Mohegan Lake, NY
Walt Daniels became only the 15th Honorary Life Member in Trail Conference history when he was awarded that honor in a vote by delegates at the 2009 Annual Meeting. The honor recognizes

Walt's 30 years of dedicated service to trails, both on and off trail, in our region.
Since 1979, Walt's stints of volunteer service have included turns as Overseer in Dutchess and Putnam counties of the Appalachian Trail (the National Scenic Trail administered by the National Park Service); project manager for the development and publication of trail maps for Hudson Highlands and Fahnestock State Parks, parks that include some of the most popular hiking trails in the country; co-author with his wife Jane of Walkable Westchester, a trails guide to the county published by the Trail Conference this year; and, since 1996, volunteer webmaster of the Trail Conference website. That last included implementation of a whole new interactive website for the Trail Conference, launched in March of this year.
Walt, a retired IBM computer programmer, has made trail building, maintenance and support virtually a full-time volunteer interest. In 2007, he and Jane completed their last section of hiking the 2000+ mile Appalachian Trail.

John Mack of Ramsey, NJ
John is a retired engineer with a deep interest in archaeology, including Mayan archaeology and the remains of iron mines in our region. His stellar public service includes laying out the Hasenclever Iron Trail in Ringwood and Long Pond Ironworks State Parks, designing the Popolopen Gorge bridge on a popular hiking trail in Bear Mountain State Park, building the Wildcat Mountain Trail in Sterling Forest, and managing the production of trail maps for Sterling Forest State Park and Bear Mountain-Harriman State Parks in New York. The trail maps, published by the Trail Conference, are used by hikers to explore parks in our region.

Jim Haggett of Poughkeepsie, NY
For more than 25 years, Jim has helped keep the Appalachian Trail, a National Scenic Trail managed by the National Park Service, through Dutchess and Putnam counties open for local hikers and the more than 2,000 thru-hikers who each year pass through our region as they walk the AT between Springer Mountain in Georgia and Mount Katahdin in Maine.

Jim began volunteering on the AT in 1983. Jim has taken on the roles of work crew trip leader, shelter builder, and chainsawyer, helping to keep the trail clear of fallen trees and branches. He currently serves as AT Trail Chair for Dutchess and Putnam counties, organizing other AT volunteers and monitoring the trail in our region.

Bob has steadfastly maintained the Posts Brook Trail in New Jersey's Wyanokie region for 50 years. Bob performed this community service responsibly and reliably as both a club maintainer and an individual maintainer. Although he has officially retired from his post, Bob still assists other maintainers in the region.

Given to those under age 21 who are making significant contributions of time and energy to trail building or protection.

Mahwah Boy Scout Troop #258
Boy Scout Troop #258 of Mahwah, NJ, was honored for its dedicated community service over several years in helping with a major trail project at Bear Mountain State Park. Over the past three years, the boys have put in over 600 hours of hard labor on the east face of the mountain, helping with the Appalachian Trail Bear Mountain Trails Project. Troop members have crushed rocks, greased cables and built retaining walls and a bridge while contributing to the construction of this artwork in stone.

The Trail Conference recognized the boys' contributions by presenting them with its Next Generation Award at the organization's Annual Meeting. The award honors significant contributions to trails by those under age 21.