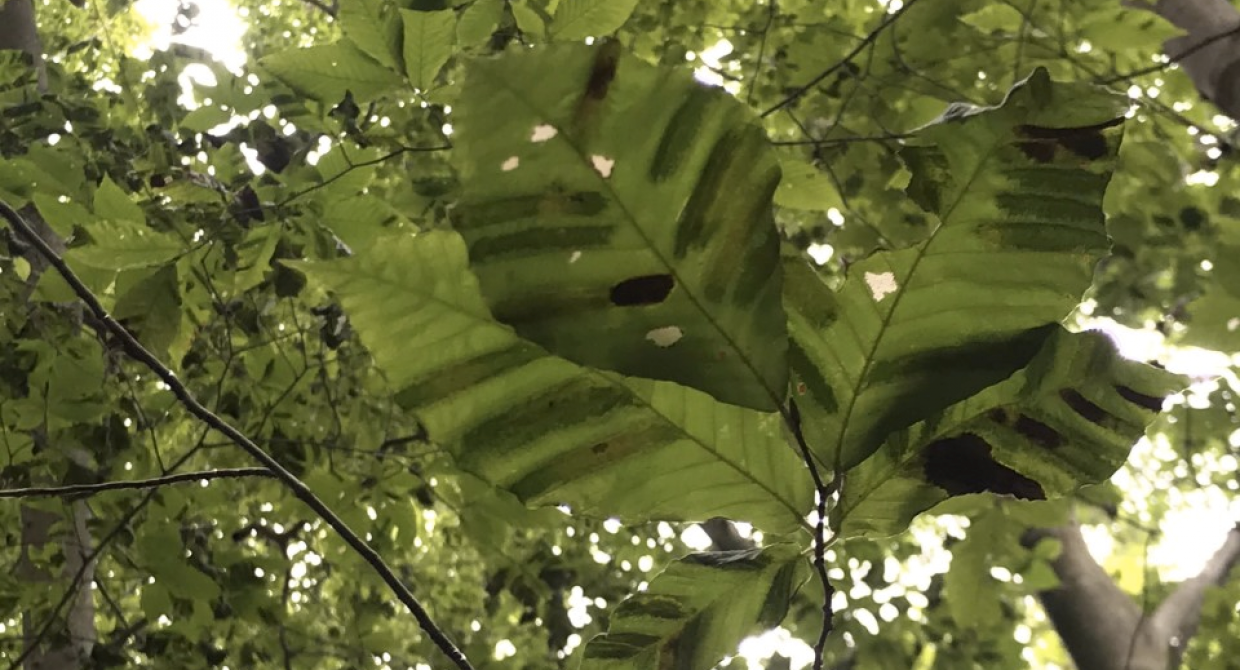 With more people seeking the comforts and escape of the outdoors, more eyes can be on the lookout for threats to our region’s forest ecosystems and natural areas.

One of the more worrying patterns emerging from reports from our volunteers concerns the health of beech trees in the Lower Hudson Valley and northern New Jersey. Many of our region’s beeches are showing signs of stress, with numerous reports of leaves curling up, darkening, and eventually withering and falling off. These symptoms are not only being seen in older beech trees but young saplings as well. These signs are disturbing, as beeches are important climax trees that play an important role in our forest ecosystems. Many large and small mammals (from squirrels to opossums to black bears) rely upon beech trees as an important food resource, as well as den habitat.

Beech leaf disease (BLD) is one possibility that scientists and land managers are exploring as a potential explanation for the symptoms being reported in our region. BLD was first discovered and reported in 2012 in Ohio but has expanded its distribution to include parts of Ontario, Canada, Connecticut, and parts of Westchester, Suffolk, and Rockland counties in New York. The primary diagnostic symptoms of BLD include striping of beech leaves between leaf veins. These striped bands tend to start as dark green and later progress to lighter green, then brown and withered as they lose their ability to photosynthesize (see photos). The cause of BLD is still a bit of a mystery. Most experts agree that it is due to a tree pathogen and not other abiotic factors such as changes to soil acidity or rainfall patterns. Recent research has linked BLD to microscopic Litylenchus worms, a genus of nematodes, but no widespread studies have been performed to irrefutably confirm this.

Adding more complexity to the beech health issue are other reports of large swaths of beech trees in Dutchess County, N.Y., and Harriman State Park that are showing similar signs of beech leaf distress, but without the clear diagnostic banding and striping of BLD. One prevailing hypothesis is that in these instances, the leaf curling and darkening are the direct results of freeze and snow events that occurred in early May. If this is the case, we can hope that the beeches may recover next year, but that growth, and potentially that beech nut set, will have been significantly impacted.

These lingering questions further highlight the importance of citizen/volunteer reporting (including good photographic evidence) of beech leaf distress so we can continue to put together a more cohesive picture of what may be afflicting beech trees in our region. For more information on how to join in this beech tree effort and further species tracking efforts through the power of citizen science, contact Invasives Species Citizen Science Coordinator Brent Boscarino at [email protected].