Susquehanna-Roseland line through New Jersey and Pennsylvania to cause significant harm to national parks.

WASHINGTON, DC -- A coalition of national, regional and local conservation groups in New Jersey and Pennsylvania, including the New York-New Jersey Trail Conference, filed suit in federal court today challenging the approval by the National Park Service (NPS) of a supersized transmission line that would cut through three popular national parks.  The suit against the NPS challenges the agency’s approval and environmental review of the 500-kilovolt (kV) Susquehanna-Roseland transmission line through the Delaware Water Gap National Recreation Area, the Middle Delaware National Scenic and Recreational River, and the Appalachian National Scenic Trail (collectively, the “parks”).  Despite NPS’s governing mandate to protect the National Park System and to prevent impairment to park resources, the NPS has authorized a project that the agency acknowledges will have serious and enduring impacts on the parks. 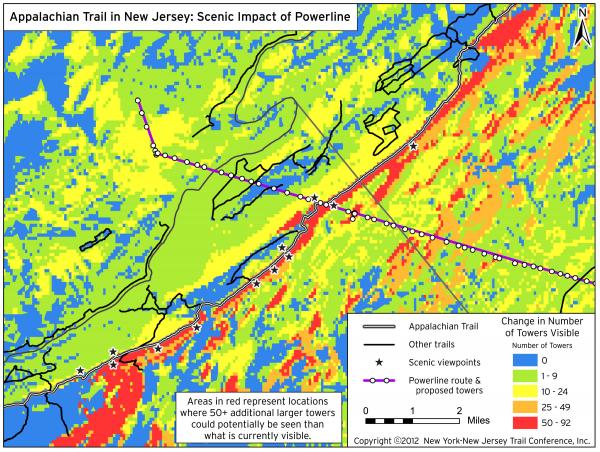 “This decision by the Park Service will permanently scar the landscape and degrade the visitor experience in some of the most visited national parks in the country,” said Hannah Chang, attorney with the public interest environmental law firm Earthjustice, representing the conservation groups in the lawsuit along with the New Jersey based non-profit Eastern Environmental Law Center. “And what’s worse, the damage from constructing and operating this 500-kV electric transmission line on nearly 200-foot-tall towers through these treasured places is unnecessary.  Serious questions have been raised about the need for this project.”  Several conservation groups have questioned the need for the transmission line in the still undecided appeal of the New Jersey Board of Public Utilities’ approval of the project.

The new transmission line to be built by Public Service Electric and Gas Co. (PSE&G) in New Jersey and Pennsylvania Power and Light Electric Utilities (PPL) in Pennsylvania will largely follow the route of an existing 85-year-old power line, but the new towers will rise more than twice as high as the existing towers and would include clearing substantially more trees and the construction of access roads through the Parks.

“The NPS decision is extraordinarily disappointing.  It clearly violates the founding law of national parks, which requires the agency to 'conserve the scenery' and protect park resources from impairment,” said Cinda Waldbuesser, Pennsylvania senior program manager for the National Parks Conservation Association.  “America’s national parks are special places, set aside for inspiration and recreation, and are not blank spots on the map, conveniently set aside for development projects like super-sized transmission lines.”

“The Delaware Water Gap is a cherished and irreplaceable public resource,” said Mark Zakutansky, Mid-Atlantic Policy Manager for the Appalachian Mountain Club (AMC).  “The AMC worked to save this unique natural area from the Tocks Island Dam project over 40 years ago.  Our volunteers have invested over 50,000 hours building and maintaining trails there, and each year we introduce over 10,000 people to the area through outdoor programs.  Millions of people from New York City and Philadelphia find respite in the area’s magnificent views and recreational opportunities.  We cannot stand on the sidelines while the Delaware Water Gap is permanently despoiled and we will fight once again to protect it.”

The conservation groups are challenging NPS’s approval of the transmission line as a violation of the National Park Service Organic Act and the Wild and Scenic Rivers Act.  They also point to deficiencies in the agency’s required environmental analysis under the National Environmental Policy Act.  “We continue to be concerned that the impacts to the scenic values of these national treasures have not been adequately addressed during the environmental review process,” said Mark Wenger, Executive Director for the Appalachian Trail Conservancy.

"The National Park Service's Environmental Impact Statement failed to assess fully the total and cumulative impacts outside the parks that will have both direct and indirect effects on the downstream natural resources within the park," said Maya van Rossum, the Delaware Riverkeeper.  "The power line will cross over both the Lackawaxen River and Bushkill Creek outside the Delaware Water Gap National Recreation Area.  Construction impacts, including clear-cutting forests, filling wetlands, and building roads, will harm water quality and habitat because both of these tributaries flow directly into the Delaware River within the park."

The coalition of groups are asking the court to overturn the NPS decision to permit the transmission line through national park land and to stop construction until the NPS complies with federal law.

The proposed Susquehanna-Roseland transmission line is a 145 mile, 500 kV transmission line from Berwick, Pennsylvania to Roseland, New Jersey that will bring coal-fired and other sources of power from Pennsylvania to urban areas in the mid-Atlantic region.  According to PSE&G and PPL, construction should be completed and the power line operational by the summer of 2015.

“The construction of high-voltage transmission lines like the Susquehanna-Roseland line impedes the development of the renewable energy resources that are our future,” said Dave Slaperud of Stop the Lines.  “Running from coal country to the mid-Atlantic states, this transmission line threatens to perpetuate electricity generated from dirty and antiquated coal-fired power plants.”

The 4.3 miles of the transmission line that runs through national park lands crosses unique and sensitive resources.  In a July 2012 environmental impact study conducted for the NPS, the human use and ecological impacts from the project were estimated at $89 million.

As announced in the Park Service’s October 1 Record of Decision, the utilities have agreed to pay $56 million in return for damaging the parks.  This compensatory mitigation and its underlying methodology and rationale were never previously disclosed or explained by the Park Service during the environmental review process.

"You cannot mitigate for the degradation of a national park or a portion of the Appalachian Trail,” said Marc Ross, Executive Director of Rock the Earth.

The Delaware Water Gap National Recreation Area, the Delaware River that flows through it, and the famed Appalachian Trail that traverses its ridges attract more than 5.2 million visitors a year who want to enjoy the recreational opportunities of the Delaware’s clean, free-flowing waters and the park’s spellbinding waterfalls and diverse wildlife that include bald eagles, peregrine falcons, and black bears.  The National Recreation Area was named a Top 10 most-photogenic national park nationwide for fall foliage.  The Delaware River is the last free-flowing river east of the Mississippi.  The Appalachian Trail, completed 75 years ago and designated as the nation’s first national scenic trail in 1968, is enjoyed by nearly three million people each year.  Together, these national parks offer the very best outdoor recreational opportunities for those living in the mid-Atlantic region.

“We have no recourse but to take this issue to the courts.  We will fight for the integrity of our parks even if the National Park Service won't,” said Jeff Tittel, director of the New Jersey Sierra Club.  “What’s at stake is the protection of valuable public lands cherished by millions of outdoor enthusiasts and nature lovers.  If they can do this here, what’s next – the Everglades, Yosemite, Yellowstone?”