Damsels and Dragons: The 'Flies' of Summer

Damsels and Dragons: The 'Flies' of Summer 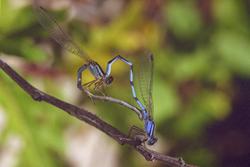 Venture near any pond or stream on a warm summer day and you are likely to see a dazzling display of dragonflies and damselflies going about their daily activities of feeding, mating, and laying eggs. These large, often brightly colored insects are members of the order Odonata, informally called the "odes."

Both dragonflies and damselflies have long narrow bodies, two pairs of large wings, and a large head that is dominated by two compound eyes. An easy way to tell them apart is by the way that they hold their wings while at rest. Dragonflies hold their wings apart, either horizontally or at a slight downward and forward angle to their bodies, while most damselflies hold their wings together, at an upward angle to their bodies. Dragonflies also are larger and stouter and are strong, versatile fliers. Damselflies are more delicate looking and tend to flutter about when they fly.

In fact, dragonflies are the most versatile fliers in the natural world. They can zip about in all directions, looking like tiny helicopters, at speeds of up to 35 miles per hour. They can change direction almost instantaneously. They also can hover in one spot for a minute or more. These amazing aerial feats are made possible by large flight muscles and the ability to move each pair of wings independently.

Dragonflies and damselflies have incredible eyesight. Their compound eyes can see simultaneously to the front, sides, and even rear and are highly adapted to detecting movement. They also have three small, simple eyes that aid in orientation while flying. They use their highly developed visual skills to capture live insects, which are their only food. 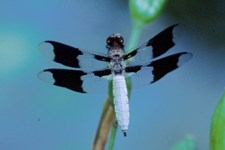 Dragonflies usually catch their prey while in flight. They may fly back and forth over an area, plucking up insects as they go. Or they may perch on a twig or blade of grass and suddenly dart into flight to capture a delectable insect as it flies by. Dragonflies can eat hundreds of mosquitoes per day, earning them the name "mosquito hawks."

Adult dragonflies and damselflies live for about four to six weeks. During this time, they eat and mate. Males of some species establish a breeding territory near water and vigorously defend it against other males of their own and other species. When a female enters a male's territory, he will intercept her to begin the mating process. Through a series of maneuvers, their bodies contort until they are joined together in what is called a mating wheel. Incredibly, dragonfly pairs often stay joined in the mating wheel while continuing to fly. Damselflies form their mating wheels while perched in a protected area.

Immediately after the pair separates, the female lays her eggs. Females of some species deposit their eggs into the water by gently tapping their abdomens to the surface. Others use sharp appendages on their abdomens to cut slits in water plants into which eggs are deposited. In some species, the male stays close to the female as she lays her eggs, to guard against other males intercepting his paternity.

If all goes well, the eggs will hatch underwater into larvae called nymphs or naiads. The nymphs continue to develop underwater for about 10 or 11 months and feed on insects and sometimes even tadpoles. The following summer, when the time is right, the one- to two-inch long nymph crawls out of the water and grabs onto a plant stem or other surface. It leaves its final larval skin behind and emerges as a young adult dragonfly or damselfly, completing another cycle of life. If you look closely at plants or sticks that rise from the surface of a pond, you may discover discarded nymph skins.

Take some time this summer to appreciate the fascinating odes. Despite their fearsome appearance, they do not sting or bite. In fact, they are quite tolerant of people approaching them closely to observe or to take pictures.

For further reading:
Dragonflies by Cynthia Berger - has thorough information on life cycle and behavior and descriptions of 26 common species

Dragonflies through Binoculars by Sidney W. Dunkle - a field guide to the 307 species found in North America