Down by the Boardwalk, All Ages Lend a Hand

Down by the Boardwalk, All Ages Lend a Hand 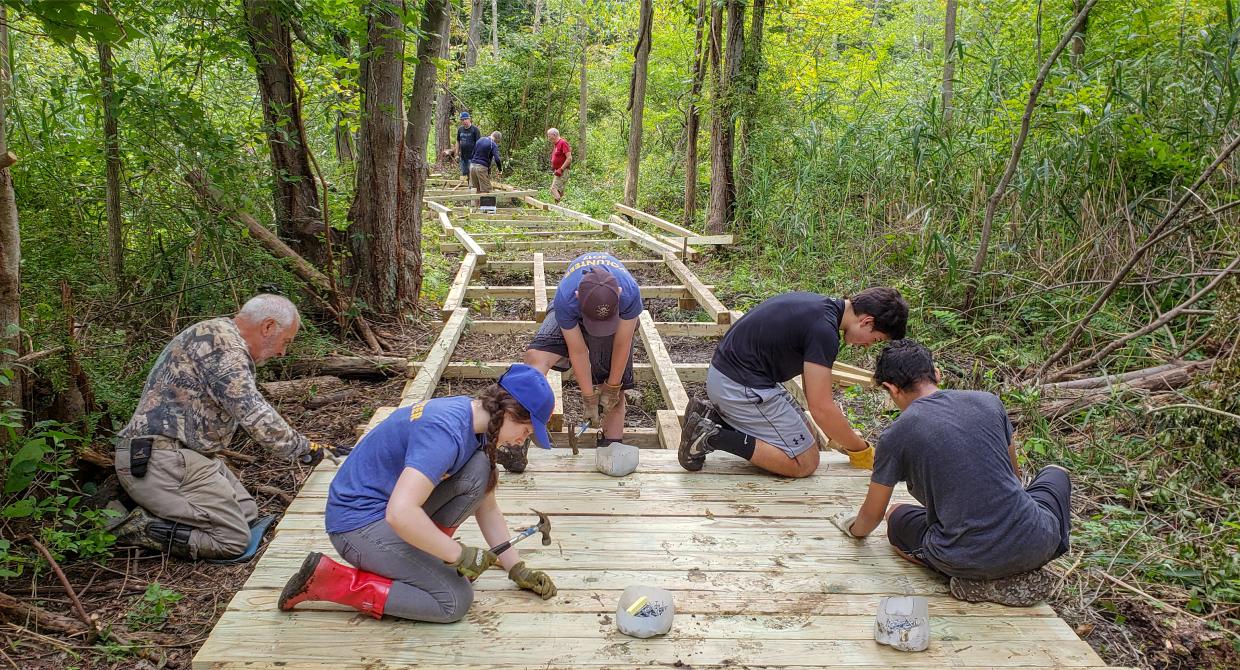 In the Town of Yorktown’s version of Monopoly, everyone gets to own Boardwalk! Well, at least the boardwalk on the Mohansic Trailway in Westchester County. It is valuable because it connects the North County Trailway with the east side of FDR State Park along a 0.4-mile former rail bed. But more importantly, during its construction it connected youth and adults. Teens saw a volunteer their grandparents’ age being physically active, making a difference, and welcoming them as part of a team. This intergenerational team worked for over 800 hours, moved almost 45,000 pounds of lumber, and hammered about 140 pounds of nails to build an 8-foot wide, 564-foot-long boardwalk.

This project is not just about the work done, but also about who was on the crew. Some trail volunteers, unfortunately, frown upon working with youth because there is the thought that they may not be there for the long term, can be unreliable, or their work is not up to par. The adults working on this project, however, had a different view and valued their participation. As the project manager, I saw how the teens’ skills improved and that they were willing to learn.

It’s the long-term benefits that matter, according to Nikhil Singh and Lucas Petruzzo, both 15. They pointed out that not only was the work fun and rewarding, but it also taught them important things about functioning in everyday life: teamwork, hard work, efficiency, and safety, which are also the backbone on which the boardwalk was built. Nikhil and Lucas felt it was rewarding to work with people of all ages, become friends, and even get dirty in all sorts of weather. “It may sound corny, but the most important thing we learned this summer was to be safe,” says Nikhil. “Jane Daniels always made sure that we were aware of our surroundings and always wore our work gloves.”

Siblings Marie (15), Claire (14), and Nick (11) Ducey all said they learned how important teamwork is. “If we didn’t have an assembly line of different jobs, we never would have gotten this boardwalk done,” says Marie. Their father Terry was pleased that they were able to learn new skills, apply what they had learned on previous projects, and work under the tutelage of different adults.

John Settembrino, a Trail Conference member volunteering on his first trail construction project, especially enjoyed working with the younger crew. “Their enthusiasm and work ethic were inspirational!” he says. “Nice when you meet young people who want to make a difference.” He often used the phrase “the hammer is the educator,” which Nikhil and Lucas say is forever etched into their minds. They also note that John always encouraged them to study hard if they want to make something of our lives.

Trail Conference member Terry Ducey, who worked on trail projects at FDR Park last year, summed up his experience in a way the entire team could agree upon: “When all the volunteers and activity are long gone and we stroll along the boardwalk passing a group of boys and girls riding their bikes, our small efforts will be rewarded. And that is how it should be.”

The Mohansic Trailway construction is a project of Yorktown Trail Town Committee, a member of the Trail Conference. Work will continue in spring 2019. For more info, contact Jane Daniels [email protected].