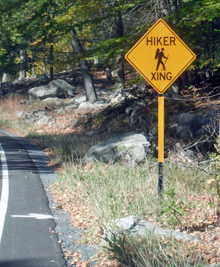 The Harriman Trails Access Committee, first convened in May of 2014 to address hiker concerns about limited access to some trails caused by the winter closing of Route 106, has continued to work with park managers on possible improvements to trail access. Successes achieved by the committee this past year include clarification about parking rules and spaces in the park, improved existing parking spaces with additional parking spaces under consideration, and safety signage for hikers at some key road crossings.

Park managers have made a special effort to address the concerns of our hiking community, and to make improvements where possible. Following is a summary of recent activity:

Route 106 Winter Access. The winter closure of this road, and others in the park, remains in effect. With just a single plow to serve the park region, a 40% cut in its budget in the past two years, and ongoing road ice problems inherited when the road was transferred from Orange County, park managers do not have resources adequate to the job of keeping it safely open in winter. Park attempts to negotiate plowing agreements with neighboring municipalities have not succeeded.

Positive news for park lovers is that the Palisades Interstate Park Commission  voted unanimously to oppose requests from casino developers, accompanied, say park officials, by offers of tens of millions of dollars, to use Route 106 and some adjacent park land to develop a new Thruway exit to access the proposed Sterling Forest Resort Casino, a project strenuously opposed by the Trail Conference and partner organizations.

Parking. Park managers were very receptive to our requests for parking improvements at several trail heads. Park staff resurfaced the pullouts at the White Bar and Victory trail heads,  at the Ramapo-Dunderberg trail crossing on Route 106, and at Reeves Meadow. As of late fall they were also investigating the possibility of creating additional parking space at Reeves Meadow.

Our request for additional parking along Tiorati Brook Road where the Red Cross Trail traverses the road  (faded gray P on our map) was considered, but limited sight distance at the pull-out was judged to make expansion there unsafe.

We suggested that a reconfiguration of boulders at the Johnstontown Road parking circle, in the southern part of the park, would add space for more cars. But park managers note that the few parking spots that would be gained would be more than offset by increased erosion and muddy conditions at the location, so there will be no changes there.

The lots at Elk Pen, off Arden Valley road, and the Sebago boat launch along Seven Lakes Drive were already in the process of being upgraded at the time the Harriman Access Committee was started up. Access to the southern Anthony Wayne parking lot will be kept open, though not plowed during the winter months.

Signage. Hiker crossing signage has been installed on Route 106 near the trailheads of White Bar and Victory Trails

Trail Links. Additional trail links to little-used existing parking lots such as at Kanawauke Circle, were discussed and ruled out due concerns about dangerous road crossings with limited sight lines and the potential for intrusion into private group camps.

We suggested a possible new trail from the Lake Welch parking area to the Beech Trail, using Hasenclever Road, a woods road that is not blazed and so is officially off limits for recreation. But since the trail network in that area is sparse, park managers responded that this potential trail might be too remote and not significantly used.

Parking Tickets. With exceptions noted below, roadside parking in the park is prohibited and subject to ticketing, even in the absence of site-specific No Parking signs.

The Seven Lakes Drive at Reeves Meadow is one area where experience suggests that the prohibition against roadside parking is generally not enforced, even in the presence of No Parking signs.

One popular destination where roadside parked cars regularly get tickets, even absent No Parking signs, is on St. John’s Road by St. John’s-in-the-Wilderness church. The exception observed here is during Sunday service, when many church-goers park along the road and are not ticketed. (The church parking lot is tiny, private and off-limits to hikers.) Parked cars will be ticketed at other times. The committee requested that a No Parking sign be installed on St. Johns Road to make the situation clear, but park managers have decided to maintain the status quo. Our advice: Do not park along this road; you may be ticketed.