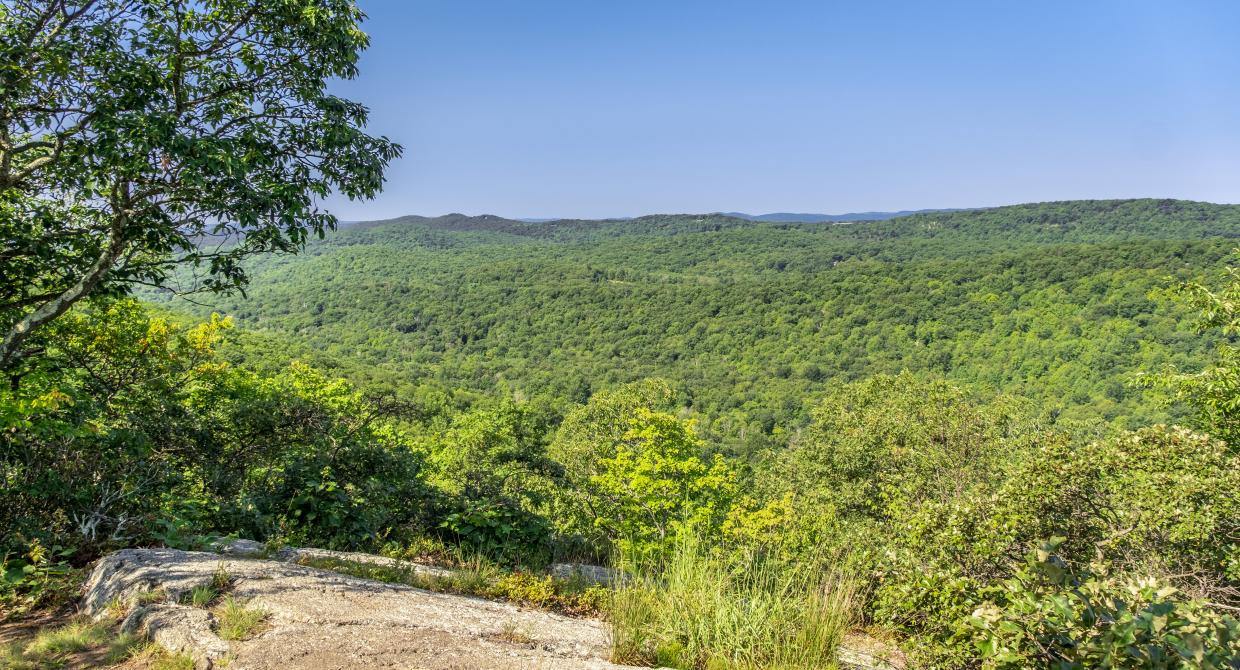 Clarence Fahnestock Memorial State Park in New York’s Putnam County has long been a favorite destination with over 60 miles of blazed trails, many of them quiet and uncrowded.

The park, like many others, has seen an enormous increase in trail usage during the pandemic. Fortunately, several projects have been underway to improve trails and park infrastructure and give more opportunities for trail users.

In August, a Trail Conference volunteer crew completed the new Oscawana Ridge Trail in the southern part of the park near Oscawana Lake. The 2-mile trail, which permits only foot traffic, may be reached by parking at the north end of Bell Hollow Road where it enters the park. Follow the red-blazed Candlewood Hill Trail for about 0.3 miles until it turns left off a steep uphill woods road. The yellow-blazed Oscawana Ridge Trail continues on the road and gradually climbs the ridge, emerging onto rocks with a broad view to the east over the lake, soon followed by views to the west over Bell Hollow. The trail continues along the ridge before descending and turning right on a wide woods road, which leads to the southern end of the trail on Lakeview Drive in Putnam Valley. Limited street parking is available, though not in winter.

We thank fellow crew members Bob Flavin, Andrew Fritsch, Bruce Lucas, and Ken Zadeck for their work to design and build the Oscawana Ridge Trail. We are now working with park staff to lay out a future loop trail down to the shore of Lake Oscawana. If you’d like to help build this trail when it’s approved, you can learn more about volunteering here.

Other changes in the park are part of the Open Space Institute (OSI) multi-year Fahnestock Improvement Plan. Most obvious is the new Big Woods Drive going north from Rt. 301 to the Big Woods parking area and trailhead. The new trailhead is at the intersection of the Cabot and Perkins trails, two Trail Conference maintained trails that permit only foot traffic. As part of the project, the Perkins Trail going west has been greatly improved to be more sustainable and attractive. This trail crosses the active farm fields of the Glynwood Center for Regional Food and Farming before entering the woods and eventually ending at School Mountain Road.

Another new parking area for 15 cars has been constructed on the south side of Rt. 301 where the Appalachian Trail crosses. This replaces some of the previous roadside parking for improved safety.

For mountain bikers and equestrians as well as hikers, OSI and the park are developing the Hubbard Perkins Loop, a 9-mile lollipop trail beginning near the Hubbard Lodge off of Rt. 9 just north of its intersection with Rt. 301. Completion is expected late this year. The trail will follow sections of several existing trails including School Mountain Road, Hubbard Loop, Wiccopee Trail, Clove Creek Trail, Fahnestock Trail, and Perkins Trail. Significant portions of some trails have been rerouted and improved to correct longstanding erosion and water problems. Signs at trail junctions will show the route of the multi-use loop and indicate that other trails are for foot traffic only.

In addition to these recent projects, other trail development continues, particularly in parts of the park east of the Taconic State Parkway. Additional land adjacent to the park is also being acquired by land conservancies and the state, giving more opportunities for trails in the future.