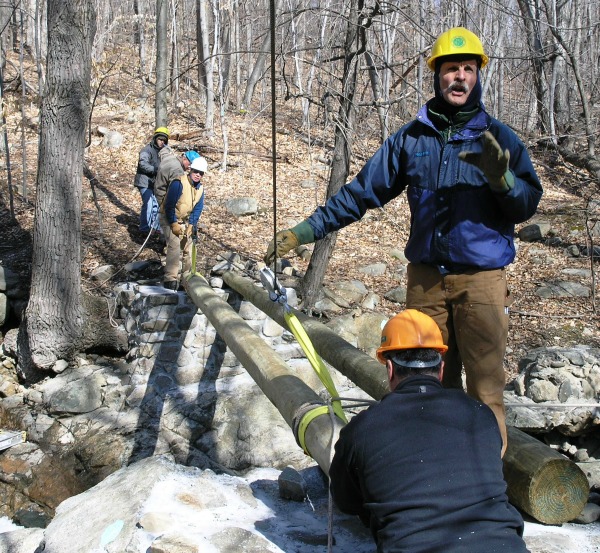 Long Distance Trails Crew (LDTC) members submitted the nomination of their crew chief to the ATC in January. Chris, along with Potomac Appalachian Trail Club volunteer John Hendrick, was officially recognized by the ATC Mid-Atlantic region as Volunteer of the Year on March 12. The following morning, Crew Leader Bob Fuller made the happy announcement to core LDTC members and friends of the crew during a Wilderness First Aid training session at Trail Conference Headquarters.

Over the past 13 years, Chris has given more than 2,300 hours to work on the Appalachian Trail. His initial involvement began in 2002, as maintainer of the "first" A.T. section from Route 17 to the Lemon Squeezer. In 2011, Chris organized, recruited, and trained the first Long Distance Trails Crew, an all-volunteer, technical trail crew. As LDTC Crew Chief, Chris supervises the crew and actively participates, from inception to completion, in every work project on the A.T. in Orange and Rockland Counties.

From March to December, on biweekly work trips, the crew relocates and rehabilitates trails, including constructing rock steps, crib walls, bridges and other elements, as required, with a focus on designing and building a sustainable and aesthetically pleasing trail.  In addition to the A.T., the crew also works on the Long Path and the Highlands Trail.  In the words of a crew member, “Chris is a patient and supportive educator, providing on-the-job training from basic safety to technical work and all that is in-between.  I have learned that planning and building a trail is much more than just creating a path for hikers.”

Throughout the year, Chris scouts to evaluate projects or to find a new route for a relocation, helps secure approvals, and designs the new trail sections. He is famous for his trail blazes. He uses a template and level to make them perfectly rectangular and plumb, for which he gets much good-natured ribbing from the crew.

Under Chris’ leadership, the crew has completed four major and three minor A.T. relocations. Most recently, the LDTC completed a highly technical 0.2 mile relocation on the southwest side of Bear Mountain. They built almost 100 stone steps, including a four-step pinned stone ladder.  The project was done during 43 trips by 73 volunteers including individuals and corporate and college groups, working a total of 3,400 man hours over a seven-month period.

“Chris Reyling is a knowledgeable, dedicated, skilled, and inspirational leader of the Long Distance Trail Crew who has brought great passion and commitment to his work over many years of service,” said Bob Kuhn, deputy general manager of the Palisades Interstate Park Commission, which is responsible for the A.T. in Bear Mountain-Harriman State Parks, in his letter accompanying Chris’ nomination. “The list of accomplishments completed by this crew in Bear Mountain-Harriman alone is both impressive and laudable. Given the heavy usage of the A.T. in these parks, the public benefit that results from this work is truly incalculable.”

Chris enthusiastically spreads the word about the crew on an ongoing basis to encourage participation and to publicize the work. He was recently quoted concerning the latest Bear Mountain work on the front-page of The Journal News. On two occasions, ribbon-cutting ceremonies have been held to open the new trails with government officials in attendance, which helps to educate them about conservation and use of open space.

In 2014, the New York-New Jersey Trail Conference recognized the crew’s significant contributions with the Paul Leikin Extra Mile Award. The crew appreciates Chris’ diligence in ensuring that all members are recognized with Appalachian Trail Conservancy pins, patches, hats or vests, as appropriate for level of service.

Following Hurricane Sandy, as a certified sawyer, Chris, along with other volunteers, cleared thousands of blowdowns, many on the A.T. When not out working on the trail, Chris serves on several volunteer leadership committees of the Jersey Trail Conference. When asked about his motivation, Chris, who completed a section hike of the entire Appalachian Trail in 2010, says he "gives back" to repay the help and fellowship he found along the Trail.

Chris is an inspiring leader. The trust, admiration and loyalty which he has earned from a core crew of about a dozen volunteers has enabled the LDTC to do its productive and valuable work.  Off trail, the crew “family,” including significant others, dines out, hikes, and spends weekends together, pursuing other outdoor activities. For this reason, the crew submitted Chris’ Volunteer of the Year nomination and is thrilled that he received the recognition.