April 2, 2014: Additional information about ticks and tick-borne diseases is reported by the U.S. Centers for Disease Control and Prevention, http://www.cdc.gov/ticks/diseases/.  See particularly, CDC's 2014 Guide (PDF) Tickborne Diseases of the United States. Other sources of information: National Institutes of Health, http://www.niaid.nih.gov/topics/tickborne/Pages/Default.aspx ; and the American Lyme Disease Foundation, among others. 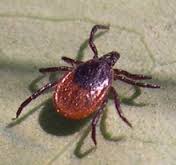 Hikers in this area are correct to be mindful of Lyme disease, the infection passed along by the deer tick. In 2010, 25% of all Lyme disease cases reported to the Centers for Disease Control and Prevention (CDC) occurred in New York or New Jersey, among nearly 30,000 confirmed and probable cases reported nation-wide. Hikers should be aware of Lyme disease, but they should arm themselves with the facts before abandoning the woods altogether. After all, only about 1% of tick bites result in Lyme disease, and even those cases could be prevented with some proactive steps.

How is Lyme Transmitted?

Lyme disease is caused by a bite from an infected black-legged tick, Ixodes scapularis, a hard-bodied arachnid found throughout the world. It commonly inhabits high grass, woods, and leaf-strewn areas. Ticks feed on mammals, attaching for several days to engorge on blood, then drop off and remain in the vegetation as they continue their life cycle: a tick larva becomes a nymph, which becomes an adult.

The cycle occurs across 2 years, after which the adult ticks die. The nymph stage is the one most likely to transmit Lyme disease to people, because nymphs emerge from their larval stage in warm weather when people spend more time outdoors. Nymph ticks are also much smaller than the adult and harder to detect since they are only about the size of a poppy seed.

Ticks cannot jump on to their host, so they climb to the top of grass or a leaf. There they can sense an approaching potential host by chemical or heat sensors and wait with front legs extended to attach to the passing mammal. This behavior is called “questing.” Once attached to the host, the tick will begin to feed.

The tick gut is a reservoir for the bacterium that causes Lyme disease. The organism, a spirochete, is shaped like a corkscrew and called Borrelia burgdorferi. Researchers believe ticks contract these bacteria from biting an infected white-footed mouse or deer. It takes approximately 36 to 48 hours of attachment for a tick to inoculate enough of the spirochete into a human host to cause Lyme disease, according to the CDC.

Initial symptoms of Lyme disease occur within 3 to 30 days of the tick bite. The most common first symptom is a skin rash frequently located at the site of the bite. Most infected people develop a rash with concentric red rings, known as a “target lesion.” It can enlarge at the original site, or the same type of rash can occur on other parts of the body as well. The rash also is referred to as erythema migrans because of its evolving or “‘migrating” course. The initial rash is usually accompanied by fever, chills, aching muscles, and swollen lymph nodes. Some 20% to 30% of infected people do not develop a rash, but the site of the tick bite may become red and swollen.

Anyone who develops a fever, chills, and aches after spending time outdoors in the spring or summer should suspect Lyme disease and seek medical care. If the infection is left untreated, other symptoms will develop. These can include muscle weakness in the face, headaches, neck stiffness, joint pain and swelling (particularly in the knees), shooting pains, and even heart palpitations related to a change in heart rhythm. As time without treatment lengthens, pain and swelling in the large joints worsens and some of the neurologic conditions (such as shooting pains, numbness, and tingling) persist.

Lyme disease is worrisome because 10% to 20% of people treated with the appropriate antibiotics can still have symptoms lasting more than 6 months, according to the CDC. This phenomenon is called post-treatment Lyme disease and specifically describes muscle and joint pain, fatigue, sleep disturbance, and even some cognitive deficits.

These lingering effects are not a result of ongoing infection, however. In fact, treatment with additional antibiotics is not helpful and not recommended. Instead, affected people may benefit from treating the symptoms in consultation with a physician. Researchers believe these late effects are a result of an autoimmune response to the Borrelia antibodies.

A physician can diagnose Lyme disease based on just the symptoms: a combination of fever, malaise, joint pain, and swollen lymph nodes with or without a rash. Confirmatory blood tests are almost always ordered, but the infected person might not test positive for 4 to 6 weeks after the bite, according to the Infectious Disease Society of America. The first test ordered is called an ELISA test. A second confirmatory test is the Western blot.

Initial treatment is a 3- to 4-week course of antibiotics. Doxycycline is commonly used for adults. Extending the duration of antibiotic therapy does not shorten the course of symptoms. Once infected, people will carry antibodies to the Lyme organism and will test “positive” on blood tests. People can become re-infected with Lyme disease, however, if bitten by another infected tick. Because those people already test positive, their physicians must diagnose a new infection solely on the basis of symptoms and history of possible exposure.

Trying to prevent tick bites is the most effective way to avoid Lyme disease, followed by surveillance for ticks attached to the body after exposure. If someone develops any symptoms, they should seek prompt medical treatment to determine if antibiotics are needed. Antibiotics are not routinely prescribed as a preventative measure.

Hikers should try to avoid contact with ticks by hiking on trails as opposed to bushwhacking through tall grass or brush. (Trail maintainers can help by clearing the trails of brush and encroaching overgrowth, leaving a clear path.)

Wear light-colored long sleeves and pants when hiking, and consider tucking pant legs into socks. Check the entire body upon returning home, with special attention to the back, all body creases, and hair. Adults should inspect small children who cannot check themselves for ticks. Shower to help remove any undetected ticks, and place clothes worn outdoors in the dryer to help kill ticks that may be attached.

The CDC recommends two bug sprays: a product that includes 20% DEET on the skin, and a spray with the chemical permethrin to treat clothing to be worn on the hike.

Hikers need not shun the woods during the spring and summer, but should take precautions to remain healthy on and off the trail. Be on the lookout for the possibility of tick bites, and remain alert while hiking and after returning home.

Howard Friedman E. Friedman, DPM, is an avid hiker, a podiatrist in Suffern, NY, and a frequent contributor to Trail Walker.