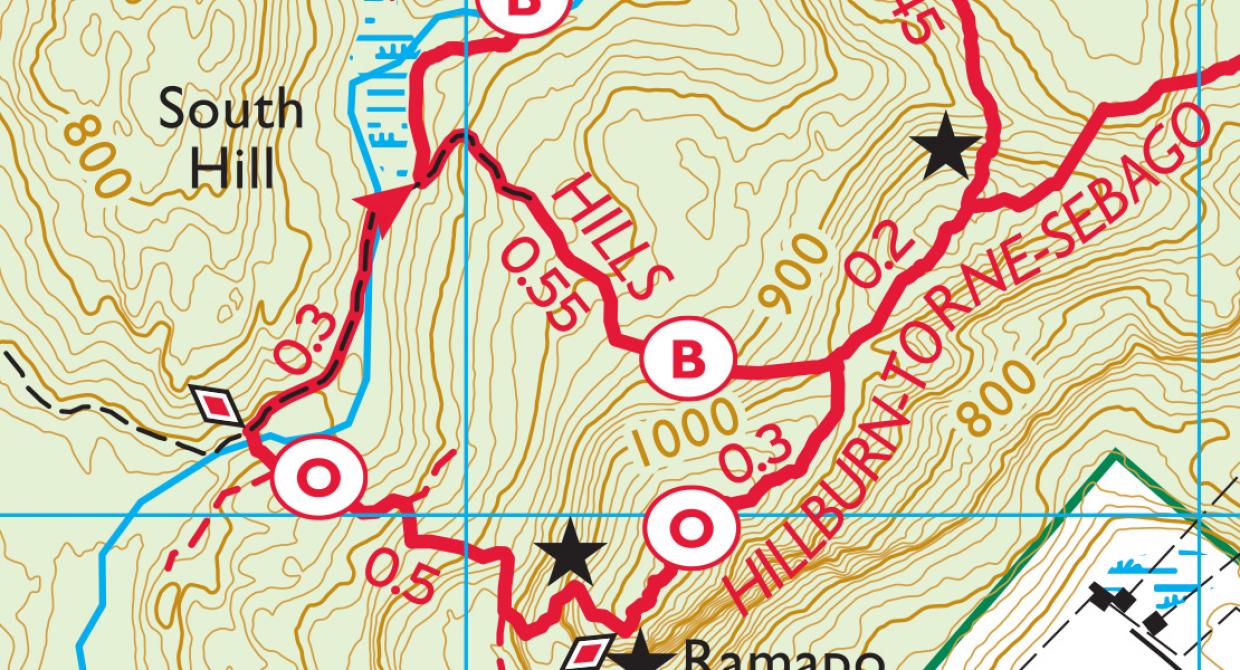 Why are lines for trails almost always red on your maps, instead of the color of the blaze markings?

Red trail lines have been the Trail Conference standard for more than 65 years, starting with the third edition of the New York Walk Book in 1951 [see Correction note below].  While I cannot guess the original reasons for doing so, there are several reasons why we continue to show marked trails on our published maps as solid red lines, coupled with blaze color symbols that are keyed to the legend.

First, individuals with some degree of color blindness or other visual impairment aren’t able to accurately determine the color of certain trails if they are colored by blaze color; some trails may look similar to others; and some trails may blend into the background and not even be visible.  A consistent blaze color symbol provides easy reference for users.

Second, it becomes much more difficult to use a print map in low light conditions if the trails are all different colors.  This can be especially important for park users who may be semi-lost as dusk approaches, and they need to figure out how to get out of the woods.  Consistently colored red lines stick out more in low-light conditions.

Third, many trail systems have colors that can appear similar, and so it can be difficult to distinguish what color a specific trail is when compared to other trails if they are all colored by their blaze color.  In particular, shades of yellow, orange, and red can look similar on a map depending on the quality of the map and printing.  Using all red lines removes any confusion of needing to distinguish similar shades.

Fourth, on a map with each trail colored by its blaze color, certain trails are given more prominence visually because they stick out more.  On a map with many colors for trails, the eyes are often drawn to darker blues and reds against a lighter background, whereas lighter yellows, white, or light-green might be less obvious and fade into the background.  Using a consistent color makes sure all trails are given the same visual weight, and our use of red helps to make the entire trail network pop out.

So now you know why all the trail lines crisscrossing a Trail Conference map are red!

[Correction Note: The opening sentence previously indicated that the first instance of red trail lines was our 1975 Harriman-Bear Mountain map.  An eagle-eyed reader, Scott, correctly pointed out that red trail lines had appeared in the New York Walk Book previously.  Thank you, Scott!]

As the Trail Conference cartographer for nearly 10 years, I have received praises on the quality of our maps, as well as many inquiries about them.  I receive certain questions on a regular basis, which is why we’re introducing this column—to share the answers! If you have a question about our maps, email [email protected] and include “Map Talk Question” in the subject line. Your question might appear in the next issue of Trail Walker.

Permalink Submitted by sharkbite on Thu, 02/02/2017 - 20:17
The Shawgunk map set (2016 ver.) has no detailed mileage markings. Why is that? Most all other sets have them. They are very useful.
Trail comments ratings:
0
No votes yet

Thanks for the question about mileage numbers on the Shawangunk maps.  We started including mileage numbers on our maps back in 2010 with our major Catskill revision, and since then, we have been able to get the mileage numbers onto more than half our maps (Catskill, Harriman-Bear Mountain, Kittatinny, South Taconic, Sterling Forest, and West Hudson).  For each map revision, we have been taking a close look at whether mileage numbers can be included; it is easier to accomplish on certain maps and much harder on others.  But we definitely realize many users find them to be extremely helpful for planning at home or navigating in the field.

For the latest Shawangunk map revision, including mileage numbers was under consideration but ultimately had to be pushed off for a future revision.  This was partly because we were focused on several changes for the maps, including a couple of new inset maps and a brand new map covering the Shawangunk Ridge down to Wurtsboro (Map 106B).  This new map 106B actually does contain the mileage numbers.  But for the next edition of this map set, we will certainly be examining whether to include mileage numbers.

Trail comments ratings:
0
No votes yet