The completion of a new multi-use loop in Sterling Forest was celebrated with a grand opening ride/run/hike on Sunday, Sept. 30.

Seventeen years after the first Trails Plan for Sterling Forest State Park was drafted, the park is about to celebrate the opening of one of the finest multi-use trails in the region, built by the Trail Conference. The completion of a 7-mile loop open to hikers, mountain bikers, and, in part, equestrians brings to fruition the dreams of so many who worked to make this beautiful forest accessible to a wide variety of users. 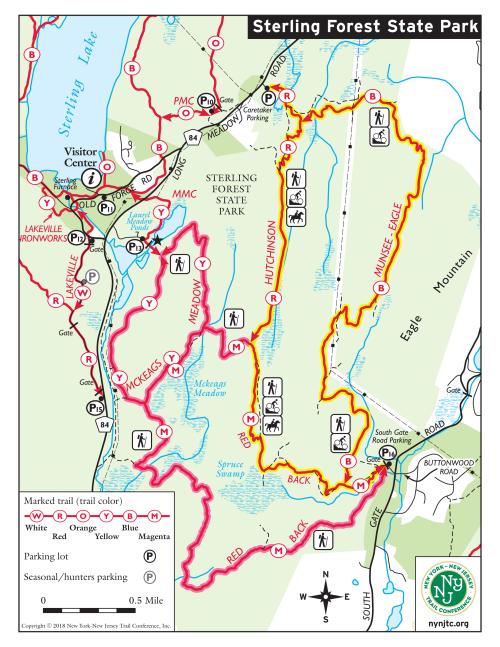 Trail maintenance and construction for hikers began shortly after the interim Sterling Forest Trails Plan was written in 2001. In 2009, a final Trails Plan was released with the vision and goal to develop, maintain, and operate a high-quality trail system that links to regional trail systems and is maintained through public/private partnerships to provide a year-round trail system for a diversity of users. With funding from New York State Parks, the Trail Conference began work on the new multi-use trail loop in October 2015.

Since then, a small army of Trail Conference volunteers and Conservation Corps members has given more than 13,000 hours building the Munsee-Eagle/Red Back/Hutchinson loop. The project achieved its first big milestone in 2016, when sections of the Red Back Trail were rerouted and the newly constructed, 2-mile Hutchinson Trail was opened. Over the last two seasons, Trail Conference crews have been building the 3.5-mile Munsee-Eagle Trail. Named after a vanishing Lenape language and Eagle Mountain, which the trail skirts, traveling the Munsee-Eagle can elicit a sense of soaring as it flows along cliffs and through valleys. “I hope the trail feels native underfoot as it unfolds before you and your mind soars away from troubles to focus on the moment and the language of the trail, however it speaks to you,” says Trail Conference Field Manager Erik Mickelson, who designed and built the trail.

On Sunday, Sept. 30, both the completion of the Munsee-Eagle and the 7-mile loop it creates was celebrated with a grand opening. (Find a larger version of the map here.) The Munsee-Eagle/Red Back/Hutchinson loop connects the Caretaker and South Gate parking lots. The Munsee-Eagle is designated for hikers and mountain bikers, while the Hutchinson and Red Back trails additionally incorporate equestrian use. The trails wind playfully across stone and wooden bridges through valleys and ravines and a multitude of habitats, past glacial erratics and dramatic cliffs, creating a fun, engaging experience that showcases the splendor of Sterling Forest.

The Trail Conference and New York State Parks held a grand opening of a 7-mile, multi-use, single-track trail loop at Sterling Forest State Park on Sunday, Sept. 30, at 11:30 a.m. at the Caretaker Parking Lot on Long Meadow Road. The ribbon-cutting was followed by a guided ride, trail run, and hike beginning on the Munsee-Eagle and returning on the Hutchinson Trail. All are welcome to help celebrate this achievement. Click here for more details.

On Oct. 24, 2015, Trail Conference field manager Erik Mickelson was joined by several key figures in the local mountain-biking community to work on the first realignments of the Red Back Trail. Breaking ground that day were Arthur White and his wife Ellen, who have been pivotal in building and maintaining trails in Ringwood State Park, and Tom Hennigan, the current president of JORBA, who has been a fixture at Jungle Habitat. Michael Vitti, from CLIMB and the New York State Trails Council, has also been an integral part of the project, helping Art and others forge the Trails Plan itself, walking some of the layout with Erik, and attending many subsequent work days.

In 2016, the Rockland Conservation and Service Corps partnered with the Trail Conference through sponsorship from Palisades MTB (made possible by REI) to work on construction of the multi-use trail loop. In 2017, Michael Bruno, founder of the Tuxedo Hudson Company, funded a second Trail Conference Conservation Corps crew to build these trails. Thanks to all partners and volunteers who made this trail loop possible! Because the new trails in Sterling Forest are mostly single-track, shared-use trail with some short sections that are particularly narrow, please practice proper trail etiquette. Pause and acknowledge each other's presence. All users yield to horses, and bikes yield to horses and hikers. If possible, move down low off the trail below horses rather than climbing above them.