Rebuilt Section of the Historic Appalachian Trail at Bear Mountain Will Be Unveiled Saturday, June 5 at 10am

Rebuilt Section of the Historic Appalachian Trail at Bear Mountain Will Be Unveiled Saturday, June 5 at 10am 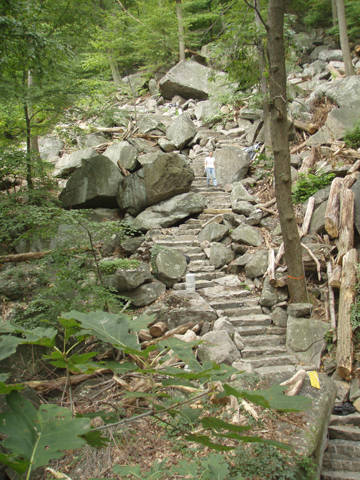 APPALACHIAN TRAIL, BEAR MOUNTAIN STATE PARK: One of the most popular hiking destinations in the New York Metropolitan region-the Appalachian Trail (AT) on Bear Mountain-has been given a major facelift and on June 5, National Trails Day, the new segment up the east face of the mountain will open to the public. The celebration comes just one week after an agreement between New York State's governor and legislature averted plans to close state parks and historic sites across the state.

800 Volunteers, 30,000 Hours, 800 Hand-hewn granite steps
More than 800 volunteers organized by the New York-New Jersey Trail Conference, working alongside professional trail builders, have been rebuilding this original piece of the AT for the past five years, using artisanal masonry techniques that make the best use of native material without disturbing the environment. Each step and wall stone has been split and shaped from rocks on site and maneuvered into place either by hand or via a series of overhead cables rigged up in the surrounding trees. The volunteers have contributed 30,000 hours of their time.

Each step measures 4-5 feet long, weighs in at around 1,000 pounds, and needed to be moved up to 300 feet without the aid of motorized equipment. The results so far include 800 hand-hewn rock steps and broad, gently sloping trail bed atop nearly a mile of rock wall built to sustain the traffic of more than 100,000* hikers annually.

The Appalachian Trail on Bear Mountain has been re-routed numerous times due to erosion caused by the impact of millions of hikers since its initial construction in 1923. The newly rebuilt segment is reminiscent of the inspiring projects built in the 1930s by the Civilian Conservation Corps in parks across the country. Like those projects it is designed to endure a century or more of heavy use by the public. It is also built to prevent the need for future relocations.

From 2006-2010, volunteers from the Trail Conference, Appalachian Trail Conservancy, Student Conservation Association, Rockland County Americorps, and the Boy Scouts of America, along with many others, have traveled to Bear Mountain to volunteer and receive free training as part of the Trail Conference's innovative Trail University program.

Trail University was founded on Bear Mountain at the start of this project and has enabled the Trail Conference to provide free workshops for volunteers seeking to learn both basic and advanced trail building techniques. These workshops have provided for a revival of the masonry skills utilized in the 1930's by the CCC when constructing much of Harriman State Parks roads, walls and buildings.

Opportunities to volunteer and learn new skills will continue to be offered by the Trail Conference at Bear Mountain as the remaining portions of the trails project continues. For information you can go to www.nynjtc.org/bmp/bear-mountain-trails-project, email the crew leaders at [email protected] or call the Volunteer Coordinator Chris Ingui @ 201-783-3599.

Quick Facts about the new Appalachian Trail section on Bear Mountain
- Since 2006 more than 800 individuals have volunteered over 30,000 hours of service. They have worked alongside professional trail builders recruited from around the country.
- The new section will feature nearly 800 hand-cut steps each weighing around 1,000 pounds.
- Over 15,000 square feet of stone crib wall have been constructed from scratch. This was all done with no mortar.
- The trail is designed to withstand the foot traffic of more than 100,000* hikers a year for the next 100+ years.
- The construction of this 1 mile of trail is the most technically complex along the entire 2,100+ mile long Appalachian Trail.

CHECK OUT OUR PRESS COVERAGE