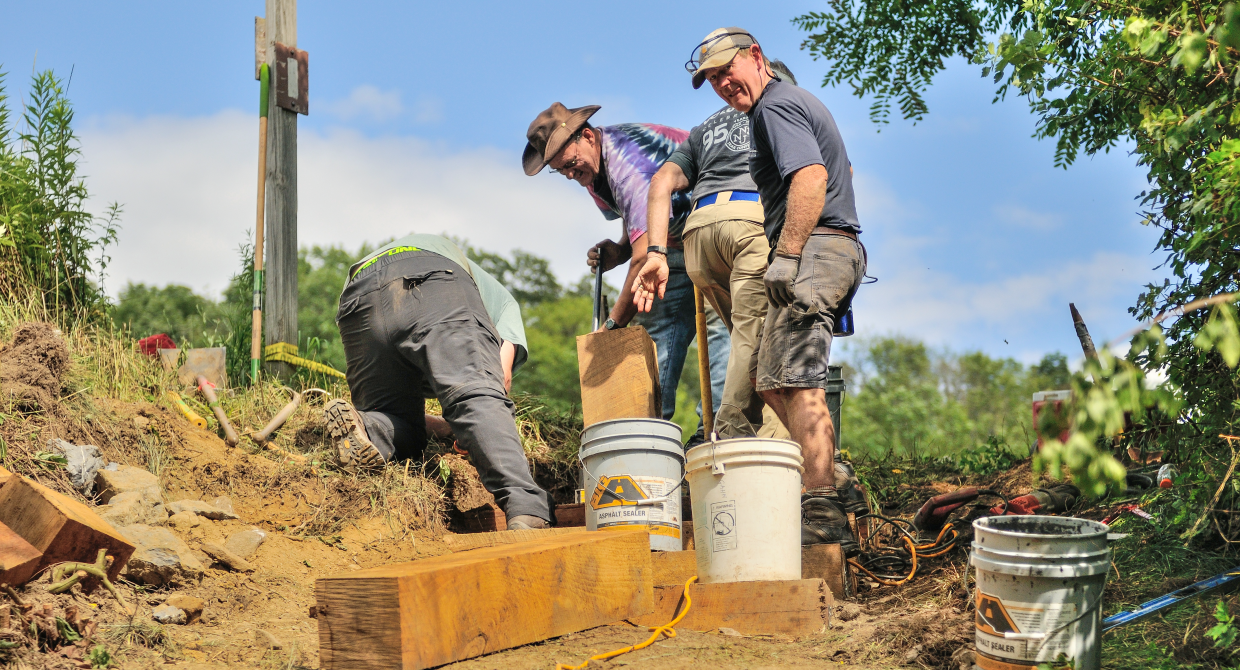 Sometime back in the spring of 2007, I was asked by Jim Haggett, chair of the Dutchess-Putnam Appalachian Trail Committee, “Do you want to build a new bridge behind RPH cabin?”

Since 1998, the Ralph’s Peak Hikers (RPH) Cabin Volunteers, a member club of the Trail Conference, has maintained the Appalachian Trail’s RPH Cabin in East Fishkill, N.Y. I knew the current bridge was getting completely flooded out at times, and a new bridge would be needed soon. After some short deliberation, I said, “yes.” Had I designed and built a bridge before? No!

With the help of the Trail Conference, design work started immediately. Excavation work went on throughout the spring; sponsors were lined up by June; and by the third week of July, 50 people showed up for the build. Thus, a trail maintenance club was catapulted into major work projects. Since that summer of 2007, RPH Cabin Volunteers has taken on large projects along the A.T. from Fahnestock State Park to the Dover Oak in Pawling, N.Y.

Over the past 10 years, our club has procured a significant cache of tools and equipment. We have developed a network of volunteers both near and far who faithfully give their time and expertise each season to these projects. Several club members have used their specialized training in stone work to put in stone steps and retainer walls at numerous sites along the Trail. We create and maintain waterbars and treadways over wet areas to inhibit trail erosion. In 2013, we built another bridge at the trailhead off of Stormville Mountain Road. In 2017, we removed and replaced deteriorated steps at Miller Hill Road where the A.T. crosses the Taconic State Parkway. The club has scheduled an annual work weekend every July for the past 15 years, during which major projects are completed. Over three days, volunteers set up an outdoor kitchen to provide hot meals for A.T. thru-hikers. Many hikers stay a day or more and participate in the trail work tasks.

All year long, the RPH Cabin maintenance is carried out by local volunteer club members. The tasks are endless: Biweekly garbage removal, building cleaning and painting, invasive weed/vine control, privy maintenance, grounds mowing, gardening, replanting trees, and bunk repair are ongoing. We look forward to another year of service to the A.T. and are planning projects for the 2018 July work weekend and BBQ, to be held July 13–15. We hope to see you there! For more information on joining the RPH Cabin Volunteers, contact Tim Messerich at [email protected], 845.401.8817, or check out RPH Cabin Volunteers website