Sam's Point and Minnewaska Closed Due to Wildfire

Sam's Point and Minnewaska Closed Due to Wildfire

The Sam’s Point Area of Minnewaska State Park Preserve will reopen to the public in a partial capacity on Saturday, May 28, 2016.

Sign up for updates and to learn more about rehabbing trails in Minnewaska and throughout the region. 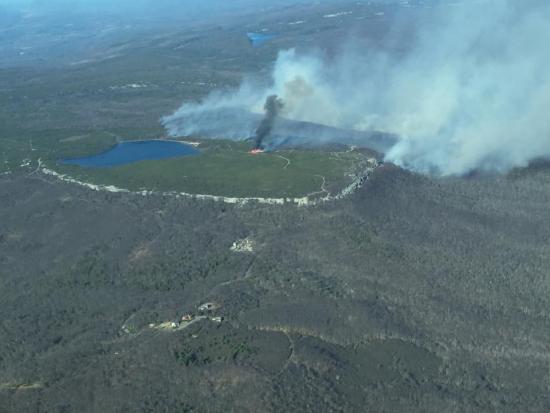 The following trails are OPEN:

From Sam's Point Preserve Staff: The Sam’s Point Area of Minnewaska State Park Preserve will reopen to the public in a partial capacity on Saturday, May 28. The Sam’s Point Area has been closed since Sunday, April 24 after a wildfire ignited on the Verkeerderkill Falls trail on Saturday, April 23. The wildfire continued for five days, burning an area of 2,028 acres. The majority of the burn occurred in the globally rare ridgetop dwarf pitch pine barrens, which is a fire dependent community.

We ask that you please adhere to the posted trail closures for both safety and ecological reasons. A large disturbance to the environment, such as wildfire, greatly increases the risk of certain invasive species becoming established. Walking in burned areas may compact the soil or crush seedlings. Staying out of closed areas will help this globally rare ecosystem regenerate. All visitor cooperation is essential.
Several research and monitoring projects are happening within Sam’s Point to help us better understand this unique environment.

From NY State Parks & Historic Sites: Minnewaska will reopen to the public on Saturday, April 30 with the following restrictions:

From NY State Parks & Historic Sites: The Sam’s Point wildfire is still active but now 60% contained. Both state and local emergency personnel continue to secure the remaining fire, which in total has consumed 1,897 acres.

Sam's Point and Minnewaska State Park Preserve will remain closed until further notice. An estimated 2,000-3,000 acres have burned; the extent of the area affected can be seen in the graphic below. Fire operations are still ongoing. Check the Minnewaska website for updates. 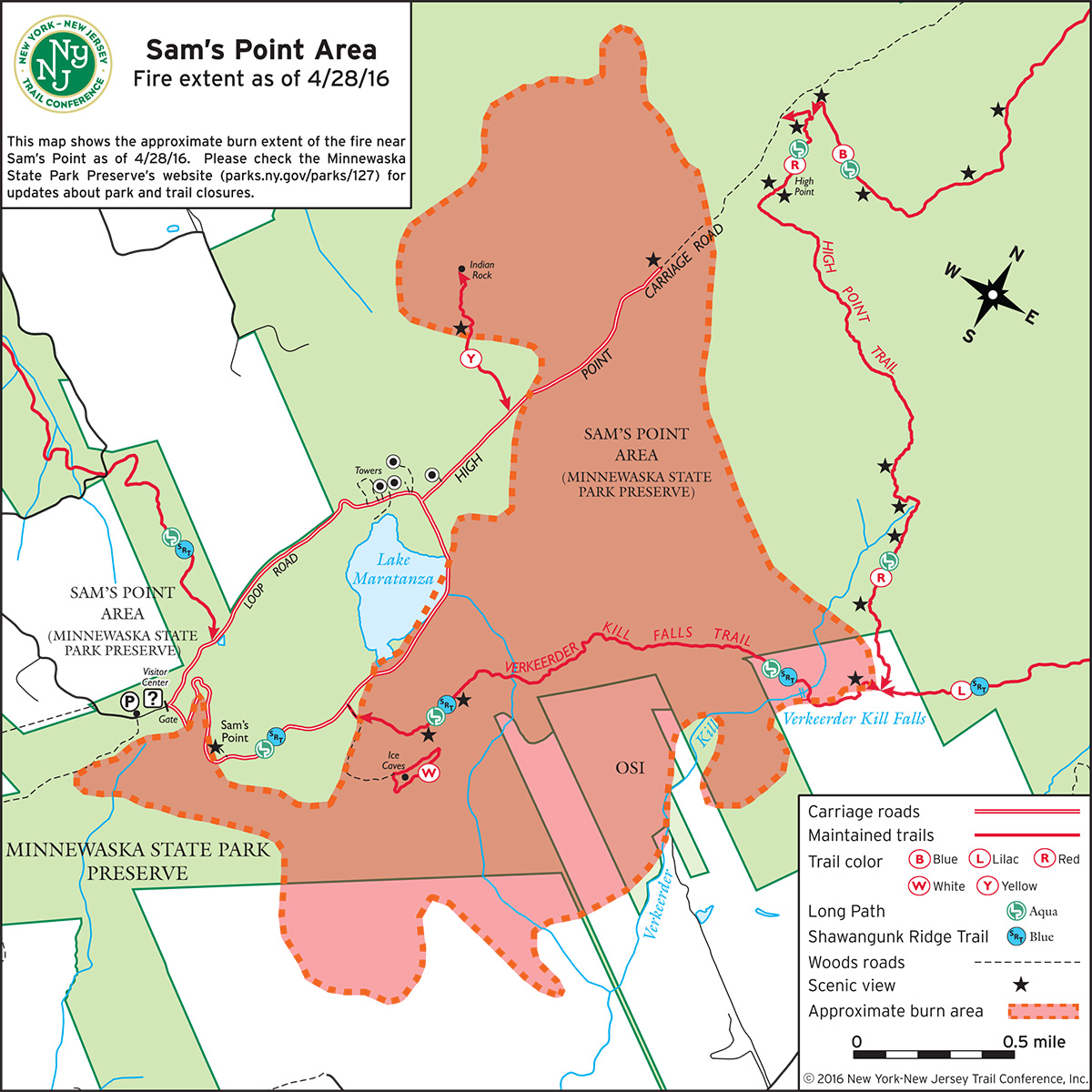 Yesterday, Governor Andrew M. Cuomo directed additional state emergency personnel to the fire at Sam's Point near Ellenville in Ulster County. State and local first responders are working to build a perimeter around the blaze, which consumed approximately 300 acres as of April 24, and continues to move south in a narrow band within the Preserve.

“State emergency personnel have been working around the clock to contain this wildfire and protect the safety of New Yorkers,” Governor Cuomo said in a press release. “We continue to work with all local partners to stop this fire in its tracks, and I urge residents to stay clear of the affected area and remain alert and informed.”

Since the fire began Saturday, State Police helicopters have been completing water-dropping operations. The helicopters are equipped with “Bambi Buckets,” which can carry 250 gallons of water. The water is taken from local ponds or lakes and dropped on the hottest parts of the fire.

According to the press release sent from Gov. Cuomo’s office, the following resources have been deployed to battle the blaze:

Fire warnings across much of our region remain high risk due to dry conditions and rising temperatures. To view an updated map of fire danger ratings in New York, visit: http://www.dec.ny.gov/lands/68329.html.

New Yorkers are reminded that a burn ban is in effect until May 14.

Open burning of debris is the largest single cause of spring wildfires in New York State. When temperatures are warmer and grasses and leaves dry out, wildfires can start and spread easily and be further fueled by winds and the lack of green vegetation. Fires may start easily and could become dangerous if not extinguished while small.