Spring Is Here When the Flowers Smell Awful

Spring Is Here When the Flowers Smell Awful 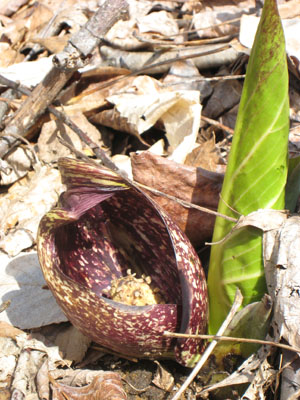 The snow is mushy and patchy, the mud is thick, the landscape is still gray and brown, and the air is chill. Spring may be coming soon according to the calendar, though a hike reveals little evidence of its approach. But down in the mud in wetlands, along stream beds, bordering seeps, is that first welcome sign. It’s the flowers of skunk cabbage, aptly given the Latin name of Symplocarpus foetidus because of its skunk-like, pungent smell. Smelly it may be, but allow its smell to attract you off the trail for a moment, to admire a remarkably well-adapted and interesting plant.

Skunk cabbage belongs to a plant family called the Araceae (Arum family), which includes many favorite house and garden plants (such as Calla lilies, philodendrons, and Caladiums). All plants in this family have a similar floral structure. Indeed, jack-in-the pulpit (Arisaema triphyllum), another member of this family, is a commonly seen wildflower in our woods all summer. In these plants, the flowers are found on a short stalk that itself is almost completely enclosed in a highly modified leaf called a spathe.

The individual flowers are small and inconspicuous. Indeed, peering into the spathe’s interior, you will see only a rounded stalk with small protrusions, which are the stamens and later the stigmas, but no petals or anything that looks like a conventional flower. The spathe sticks up about six inches above the ground, and at the time of flowering, during the late winter and early spring, there are no leaves; they would only get in the way of the floral business (getting pollinated and making seeds). The spathes are brownish, spotted with purple, and can be hard to spot against the brown mud in which they are usually growing. Cold is no impediment to flowering; the spathes will push up through snow or even a thin layer of ice.

You may wonder why and how a plant can manage its pollination business when the environment is so delightfully insect-free. But indeed, while the insects that bother hikers are not yet flying, many small flies are out and about. The trick is to attract them, and to allow pollination processes (the growth of the pollen

Skunk cabbage uses an unusual mechanism for this: heat production. High metabolic activity in the floral stalk results in the generation of heat, just as it does in mammals. The spathe, nicely curled around the stalk, helps retain that heat and focus it on the flowers. The temperature within the spathe is maintained at 20-24ºC (a comfy 68-75º F), even if the outside air temperature falls to 0ºC (freezing).

The heat within the spathe helps volatilize chemicals from the flowers, producing new chemicals, including include putrescine and cadavarine. As their names indicate, these volatized chemicals suggest the aromas of half-rotted animal carcasses, delightfully attractive to flies though repulsive to humans. Once insects enter the spathe, they are kept warm and therefore physically active by the heat interior.

Flies and other insects are not abundant in early spring, but skunk cabbage flowers have no competition for their services, unlike plants blooming later in the spring, which must compete for pollinators.

After the flower is pollinated, the spathe wilts. As spring progresses, large leaves emerge from buds adjacent to the flower. Skunk cabbage does not produce a stem; rather, the leaves form a large and conspicuous rosette around the now-wilted flower. The leaves reach their full size by mid-spring (mid-May to early June), and they last until mid-summer.

By mid-summer, the pollinated ovules will have produced a cluster of dark red-purple berries. By August, these fruit clusters fall apart, allowing the seeds to be dispersed by animals or water. The leaves continue to manufacture specialized chemicals that give them their characteristic pungent, skunk-like smell. Now, however, the function of these chemicals is to repel insects and any other animals that might be tempted to feed on the large and nutrient-rich leaves. You will find very little evidence of herbivory; the leaves stay intact through the summer. They die by late summer, and rapidly decompose, returning their nutrients directly to the large root system directly beneath the plant.

Skunk cabbage is an “obligate” wetland plant, meaning that it is found only in wet ground. Its interesting adaptations include specialization for the wetland habitat, as well as its precocious sex life in early spring. All of its tissues (flower stalk, leaf stalks, leaves) are very spongy, filled with large air spaces. This air-filled tissue ensures an adequate oxygen supply to all of the plant’s tissues, especially its roots, which are embedded in oxygen-deficient wetland muck. The roots also are adapted to resist the strong frost-heave of saturated soils; they have contractile bands, which help pull the roots down into the wet soil, anchoring it as the soil freezes (expands) and thaws (contracts) during the winter.

While skunk cabbage may smell repulsive to us, its abundant supply of chemicals made it a useful source of medicine to Native Americans, and it still attracts interest as a source of herbal remedies. However, all tissues except the youngest, curled-up leaves contain large quantities of calcium oxalate, which is quite toxic. So enjoy the flowers as the first sign of spring, but don’t try to eat this wetland “cabbage”!

Joan Ehrenfeld is professor of ecology at Rutgers University. She directed the Invasive Plant Monitoring project with the Trail .