The New York-New Jersey Trail Conference is supporting an effort, led by volunteer Steve Marano of Nutley, NJ, to revitalize and increase public awareness for the 34-mile Lenape Trail in Essex County, NJ, by providing expertise in trail work and volunteer training and support to area residents who seek to revitalize the trail.

The Lenape Trail connects 18 parks in Essex County and is arguably one of the oldest and most unique ‘urban greenways' in the Northeast. Seventy percent of the trail passes through parkland or other natural areas; the rest is on-street. This 30-year old trail, first blazed in 1979, has been created and maintained nearly single-handedly by Al Kent (pictured below), a now retired Morris County Parks Department employee. 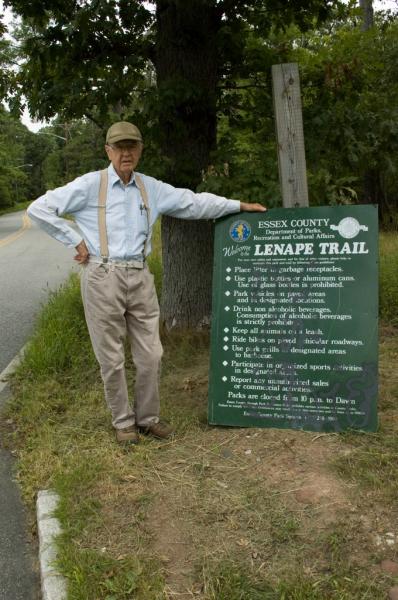 Al is a truly remarkable individual who at the age of 84 still performs maintenance nearly every day throughout the year on both the Lenape Trail and Patriots' Path in Morris County. While Al has reblazed the trail where needed over the years, it is extremely difficult for any one individual to maintain more than 30 miles of blazes, let alone one in his mid-80s. Many of the trail's blazes have faded and some have disappeared entirely, making it hard to follow.

Of more significance, the public is virtually unaware of the existence of this unique resource. The trail is marked entirely with yellow blazes, which, while acceptable in traditional forested areas, are almost unnoticeable in urban settings.

An informal survey conducted by Steve Marano revealed that at best only one in 20 residents were even aware of the trail running through their neighborhood.

The revitalization project being kicked off this summer is a multi-phased effort intended to address this issue head on. Not only will the entire 30+ miles of trail be reblazed, but it will be marked in strategic, high-traffic locations with professionally printed metal medallions large enough to advertise the trail's existence.

The medallions will display the trail name in bold letters along with a distinctive arrowhead logo, and include a Website URL where those interested can obtain maps and information.
The project kicked off earlier this summer when a Montclair High School 2010 graduate named Ian Vanderklein, working under Trail Conference supervision, used a GPS to document all existing blaze locations and identify problem areas in both directions. Lenape Trail volunteers are now using this data extensively to help direct their reblazing efforts which are now underway. 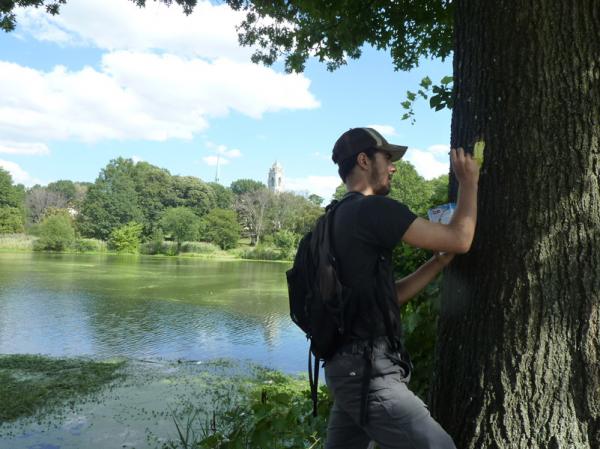 On August 21, experienced Trail Conference volunteer Robert Jonas supported this effort by giving a workshop in trail blazing to a group of nine individuals interested in helping with the reblazing project. Additional workshops are being considered to supplement the initial volunteers as needed.

The Lenape Trail is a component of the 156-mile Liberty Water Gap Trail (LWGT), "The only trail in America that can boast of a national landmark at each end," the Statue of Liberty in the east and the Delaware Water Gap in the west. The LWGT was envisioned in 1999 by the same Al Kent, who initiated a statewide effort among various state and county organizations to tie together a half dozen trails to form a continuous trail across New Jersey.

This effort has languished in recent years. It is Steve Marano's intention to use the Lenape Trail Revitalization to jumpstart completion of Al's vision. Steve reports that several critical milestones on the LWGT were achieved late last year, including the authorization by Jersey City, Newark, and Liberty State Park to establish trail signs for the LWGT along its easternmost fifteen miles to the Hudson River waterfront. Steve hopes to initiate the signage effort after completion of the Lenape Trail project.

For more information about both the Lenape Trail and Liberty Water Gap Trail please visit www.libertywatergap.org.

A Columbus Day (October 11) walk along the entire trail is planned by the group Free Walkers. Visit http://lenape34.squarespace.com/ for details.

If you would like to volunteer on the Lenape Trail, send us an email at [email protected].