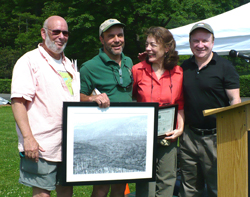 The Trail Conference gave its highest honor, the Raymond H. Torrey Award, to JoAnn and Paul Dolan  of New York, NY, during June 5th National Trails Day festivities opening the newly rebuilt Appalachian Trail at Bear Mountain State Park. The Torrey Award recognizes significant and lasting contributions that protect hiking trails and the land upon which they rest. (The Dolans are pictured at right in the photo, with Neil Zimmerman, left, former Trail Conference president and a Torrey Award winner himself, and Ed Goodell, current executive director.)

The Dolans have teamed for more than 30 years on conservation projects that help connect people to the landscape. This is almost as long as they have been married, a partnership that began with a honeymoon at the Bear Mountain Inn and hiking the AT locally.

JoAnn became Trail Conference Executive Director in 1980 and served in this capacity for 13 1/2 years, as well as working as a volunteer and consultant over a 20-year span. JoAnn worked with the Trail Conference board and volunteers on the protection of the Appalachian Trail in New York and New Jersey, concentrating on AT corridor management and expansion.

She also helped raise funds and awareness for the Long Path project and worked closely with other conservation partners on efforts to protect Lake Minnewaska. JoAnn played a major leadership role in the protection of Sterling Forest, working closely with Carol Ash and Bob Binnewies of the Palisades Interstate Park Commission (PIPC) and a vast coalition of conservation partners.

Paul Dolan is an almost 30-year veteran of ABC News and now serves as Executive Director, ABC News International. In this role he helps negotiate and manage business and strategic agreements in Japan, India, Germany, Turkey, Canada, and other countries.

Closer to home, Paul helped write and edit the Regional Plan report calling for the preservation of Sterling Forest and then volunteered for the 20-plus-year struggle to save Sterling Forest. He has also been a longtime volunteer on Native American land preservation efforts in Seattle.

Both JoAnn and Paul have also volunteered on the successful effort with PIPC to preserve Arrow Park, 570 acres of wooded hillside overlooking Arrow Lake near the Appalachian Trail and adjacent to Sterling Forest State Park. They sponsor special programs for children and families at Arrow, including annual programs with Calvary Hospital and the New York City Fire Department.