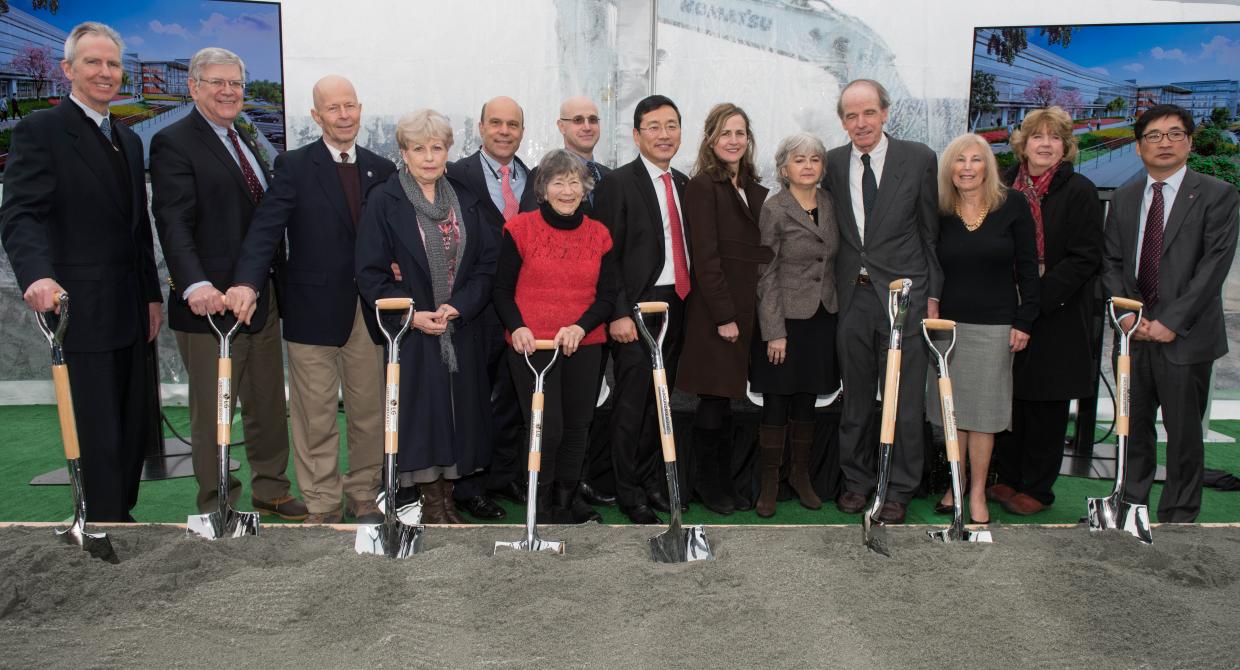 The Trail Conference and four other conservation groups applaud LG Electronics for the new headquarters design that protects the vistas of Palisades Park.

The groups had previously raised concerns about the original proposed height of the building adjacent to the New Jersey section of the Palisades Interstate Park, a National Natural and Historic Landmark. A lawsuit was filed by the New Jersey State Federation of Women’s Clubs (NJSFWC), Scenic Hudson, and Trail Conference members Margo Moss and Jakob Franke. It came in response to the Borough of Englewood Cliffs providing LG with a variance in early 2012 to build nearly four times higher than the long-standing 35-feet limit. When the variance was legally challenged, the Borough amended its zoning code to permit construction of buildings 150 feet in height along the Palisades Interstate Park. Larry Rockefeller, a Trail Conference member and trustee of the National Resources Defense Council, raised the alarm in October 2012 and enlisted the support of the Trail Conference and Federation of Women’s Clubs.

This began a series of grassroots advocacy efforts to persuade LG to build below the tree line. Under severe local public pressure, in August 2014 the Englewood Cliffs Council unanimously adopted Ordinance 14-11, which restored the original 35-feet height limit throughout Englewood Cliffs. However, due to the variance previously granted, LG retained permission to build well above the tree line, which would have marred the view of the Palisades cliffs, a National Historic & Natural Landmark north of Fort Lee, N.J.

LG and the conservation groups reached agreement in 2015 on a new design, which all parties celebrated as a “win-win” solution.

Protecting the iconic vistas and integrity of the Palisades Park, the new building design includes a five-story north wing just shy of 70 feet in height and a four-story south wing. According to LG, the complex’s LEED Gold design includes protecting woodlands and six wetlands on the 27-acre site in Englewood Cliffs, where LG has committed to increasing the green space by 50 percent and planting more than 1,500 trees.

Rockefeller, an environmental lawyer whose family donated the land 80 years ago that became the basis for the Palisades Interstate Park, was a leading participant in the discussions, along with representatives of the five conservation groups. “This truly is a ‘win-win’ resolution. I would like to publicly commend LG for its willingness to listen and work with us in seeking a mutually agreeable solution. The new design, which results in an outstanding new headquarters for LG, will help preserve the Palisades as a treasured national landmark,” said Rockefeller.

Edward Goodell, Executive Director of the New York-New Jersey Trail Conference, applauded LG’s new building design, saying: “We very much appreciate the efforts of LG Electronics and all others who joined the effort to bring this chapter in the story of the Palisades to a positive conclusion. Now, we look forward to working with New Jersey’s elected officials to close the book with a happy ending by permanently protecting the Palisades for future generations.”

Ned Sullivan, President of Scenic Hudson, said, “By partnering in the win-win agreement that preserves the majesty of the Palisades while meeting its business needs, LG has demonstrated its commitment to cooperating with stakeholders to protect the environment. The beauty of the Palisades will now continue to be a source of inspiration for generations to come.”

Linda Babeuf, past President of the New Jersey State Federation of Women’s Clubs, said, “As the same Federation of Women’s' Clubs that has worked hard for over a century to protect the Palisades, we congratulate LG Electronics on its new headquarters and the decision to redesign its new headquarters to preserve the Palisades’ landmark vistas enjoyed by all.”

Mark A. Izeman, Director of the New York-Northeast Program of the Natural Resources Defense Council (NRDC), said, “Starting construction is a testament to the commitment by LG and all parties to find a solution that both protects this iconic landmark and benefits the local economy. Preserving the cliffs and these majestic Hudson River views more than a century ago marked an early milestone of the conservation movement in America. Today’s event shows we can keep this tradition alive in the 21st century when we work together to find common ground.”

Michele S. Byers, Executive Director of New Jersey Conservation Foundation, thanked LG for becoming a partner in the protection of the Palisades. “The Palisades are not only a national landmark but they have become a symbol of the need to be vigilant to protect our American heritage so that future generations may enjoy these designated special sites. I am pleased today that LG has worked with residents and conservation groups to continue the century long protection of these iconic cliffs.  We now need to make sure that they are protected in perpetuity,” she said.