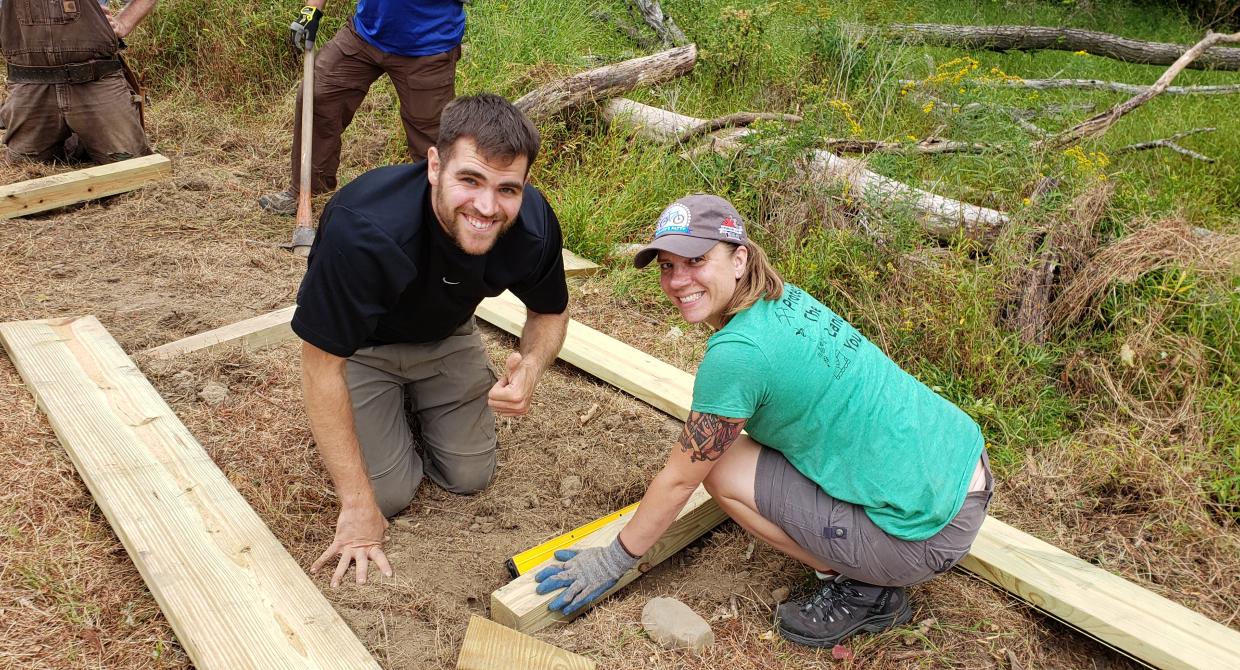 It’s safe to say hikers and mountain bikers don’t always see eye-to-eye over trail use. But in the Town of Yorktown in New York, these two user groups have worked together since 2010 to establish a successful shared trail system—and did so in record time.

With Yorktown’s acquisition of the Granite Knolls property imminent in 2010, my husband Walt and I, residents of the town, asked permission to build trails in the soon-to-be parkland that surrounds the Taconic State Parkway. Shortly after permission was granted, Tim O’Connell, a member of the Westchester Mountain Biking Association (WMBA), asked if his group could help. As supervisor for trails in Yorktown, my initial reaction was, “no, it’s my project.” I quickly realized that was not a good attitude and just as quickly agreed to include them.

And so, hikers and mountain bikers worked together to build trails at Granite Knolls Park, Woodlands Legacy Fields Park, and additional trails at Sylvan Glen Park Preserve. Tom Schmitt of WMBA took the lead in Granite Knolls, realizing that designing a trail network was a once-in-a-lifetime opportunity. Tim directed efforts in Woodlands while Walt and I concentrated on expanding the trails in Sylvan Glen. This partnership raised funds, recruited volunteers, and involved youth. On average, it takes three years to build 3 to 4 miles of trail; here, 10.7 miles of trails—including boardwalks, bridges, signs, stone steps, and kiosks— were completed in less than two years. In 2015 and 2017, Tim spearheaded the design and construction of an additional 1.5 miles of trails in Sylvan Glen, opening up two other areas of the park.

Fast forward to 2019, and the two groups are still working together: we’re running work trips, removing blowdowns, and at the leadership level, talking. It was time for me to hand over the keys, so to speak. The town wanted a local resident to be in charge of the volunteers; thanks to these partnerships, Laura Kelly of WMBA agreed to assist me and will eventually take on the role of trail supervisor. She persuaded WMBA to join the Trail Conference, creating new opportunities for their members to take workshops and maintain trails. Laura has taken the responsibility of running work trips while I continue to interact with maintainers. I know that the trails in Yorktown will be in good hands with Laura at the helm.