Walk Your Way to Health

Walk Your Way to Health 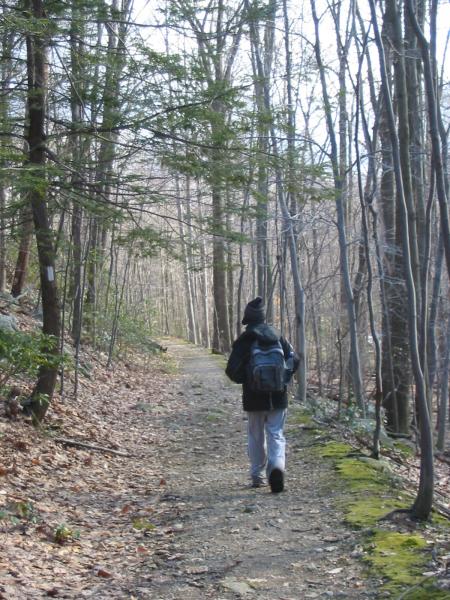 This article was first published in Trail Walker, September/October 2005.

Do not be surprised if, in the near future, your physician's initial response to your high cholesterol will be "take a daily walk for 30 minutes," rather than "take a daily cholesterol-lowering statin pill." Walking is becoming recognized as a valuable form of exercise with important health benefits, and it is one in which almost everyone can participate. No special equipment or personal trainer is required!

The benefits of walking regularly extend beyond improving one's physical health. A recent report in the Journal of the American Geriatric Society notes that regular walking can improve the symptoms of clinical depression and decrease a sense of fatigue. Another study, published in a medical journal that focuses on issues related to sports and exercise, documents that people who walk regularly-for about 30 minutes, five times a week-report an increased feeling of self-confidence, while those who describe themselves as not being regular walkers report feeling "unhealthy" and lacking energy.

It is easier, however, to measure the physical benefits of walking regularly. Blood tests before and after a period of walking, hiking, or running will reveal if important markers, such as cholesterol or triglycerides, have improved.

The good news is that, regardless of activity level, each participant in the study benefited from a decrease in their level of triglycerides, an increase in their level of HDL (the "good" cholesterol), and a decrease in body fat mass. Two weeks after the participants ceased all exercise, however, only people in the most vigorous exercise group maintained any benefit of improved cholesterol.

30 Minutes a Day
While experts agree that when it comes to exercise and health, more is better, the genuinely busy but health-conscious person need not despair. Walking briskly at least 30 minutes a day, five times a week, is the suggested minimum. However, the benefits of exercise are cumulative. So, three ten-minute walks during the course of a day will also improve health.

One tool now popularly used to encourage people to walk more is the pedometer. This small device, which counts the number of steps taken during the course of a day, can be clipped to a belt or waistband. A pedometer can help someone understand that perhaps he or she is indeed more active than they realize. At the same time, knowing that every step is being counted may encourage someone to walk more than planned, e.g., by parking at the end of a parking lot.

Keep Your Mind Sharp, Too
Another landmark study published by the Harvard School of Public Health recorded the results of more than 18,000 women between the ages of 70 and 81 years who walked either 40 minutes a week or 90 minutes a week. Rather than focusing on the physical benefits of exercise, this study evaluated how walking affected mental acuity and cognition. Nurses queried participants over the telephone throughout the study, asking questions that would test memory, recall, and attention. Once again, the women who walked longer distances demonstrated better cognitive function and-just as important-less mental decline over the period of the study.

Conclusion
The evidence regarding the health benefits of walking are clear: improved cardiovascular health, a boost of brain function, and uplifted spirit. With or without a pedometer, a person who takes either one long walk a day or several shorter ones can be assured that he or she is contributing to their overall health. Of course, walking briskly will confer more benefit than strolling lazily, and the benefits of a long and vigorous hike exceed those of a short walk.

Howard E. Friedman, DPM, is a podiatrist and board certified foot surgeon treating hikers and non-hikers in Suffern, NY.