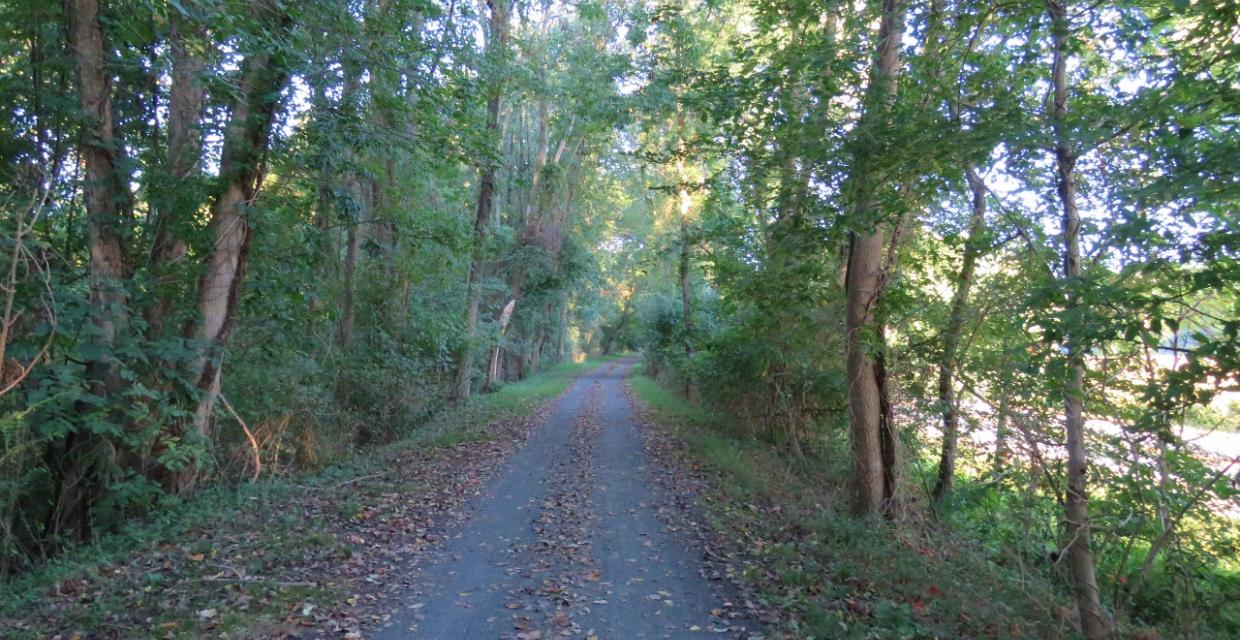 A linear park consisting of 64 miles of flat trail and towpath along an historic canal, with many 19th century structures still standing.

The Delaware and Raritan Canal was built in the early 19th century as an effective means of transportation between Philadelphia and New York, facilitating connections to the rest of world.  Once completed, it became one of America's busiest navigational canals.  In 1871, its busiest year, total tonnage shipped surpassed the longer and more famous Erie Canal. The canal was abandoned as a route for navigation in the 1920s, but it was preserved virtually intact because it also served as a source of water supply for the neighboring towns (unlike the Morris Canal, which was largely obliterated). Today, with its 19th-century bridges, bridge-tender houses, past and present locks, cobblestone spillways and hand-built stone-arched culverts, the canal is an attraction for history lovers.

The D&R Canal State Park provies a corridor for wildlife to move among forests and preserves in Hunterdon, Mercer, Middlesex, Somerset, and Burlington Counties.

The 24-acre Bull's Island Natural Area is on a small forested island surrounded by the Delaware River and the Delaware & Raritan Canal in Stockton. The lowland floodplain forest is dominated by sycamore, silver maple and tulip poplar and contains several rare plant species. Check its website for details.

The park is in the shape of a lazy "V," as the feeder canal parallels the Delaware River [for about 30 miles] and then the main canal extends from Trenton to New Brunswick [for 34 miles]. Unfortunately there is a gap where the canal crosses US 1 outside Trenton.

A linear park consisting of 64 miles of flat trail and towpath along an historic canal, with many 19th century structures still standing.

The Delaware and Raritan Canal was built in the early 19th century as an effective means of transportation between Philadelphia and New York, facilitating connections to the rest of world.  Once completed, it became one of America's busiest navigational canals.  In 1871, its busiest year, total tonnage shipped surpassed the longer and more famous Erie Canal. The canal was abandoned...

09/P23) - Department of Environmental Protection Acting Commissioner Mark N. Mauriello today announced construction will begin on pathway that will complete the 70-mile trail running along the from Frenchtown to .

“This unique public-private partnership will open an area previously inaccessible to outdoor enthusiasts,” Commissioner Mauriello said. “This final stretch will allow cyclists, joggers and walkers to enjoy a scenic route through . Under Governor Corzine’s leadership, we’re blazing new trails that will put our extraordinary natural resources within everyone’s reach.”

The $400,000 project will be funded by capital-improvement dollars dedicated for projects in state parks, forests and wildlife management areas. Clearing of the site, which is the first step in the path construction, will begin soon.

“Projects that promote alternative forms of transportation that provide opportunities for biking, walking and hiking are important,” DOT Commissioner Stephen Dilts said. “DOT is happy to be a partner in this project as the missing link in this popular recreation corridor is able to be completed.”

Currently, the Delaware & Raritan Canal path in Trenton ends at Old Rose Street and then continues approximately 1.5 miles north on Mulberry Street. Because there is no defined route that allows access between those two streets, cyclists and pedestrians have long urged the DEP, the City of and to bridge the trail’s only gap, a section buried during construction of Route 1.

“Completing this missing link is a significant moment in the storied history of the ,” Congressman Rush Holt (NJ-12th District) said. “For a state as densely populated as to have a 70-mile uninterrupted path for biking, nature hikes and recreation is remarkable.”

The easement along the in this area was owned by Conrail. As a result of negotiations, Conrail agreed to release its easement on 12 acres and to convey two small parcels to the state so that the trail project can go forward. Conrail will be able to continue rail operations on its remaining property.

The is one of the state’s most significant historic and recreational resources. The canal was built across central in the early 19th century to provide a fast, safe route to transport freight between and . Built primarily by Irish laborers, the canal was mostly dug by hand. The canal is 70 miles long, 50 feet to 75 feet wide and 6 feet to 7 feet deep. Not only is the D&R State Park a popular destination for canoeing, bicycling, jogging, fishing and horseback riding, the canal serves as a clean drinking water source for more than 1 million New Jersey residents.