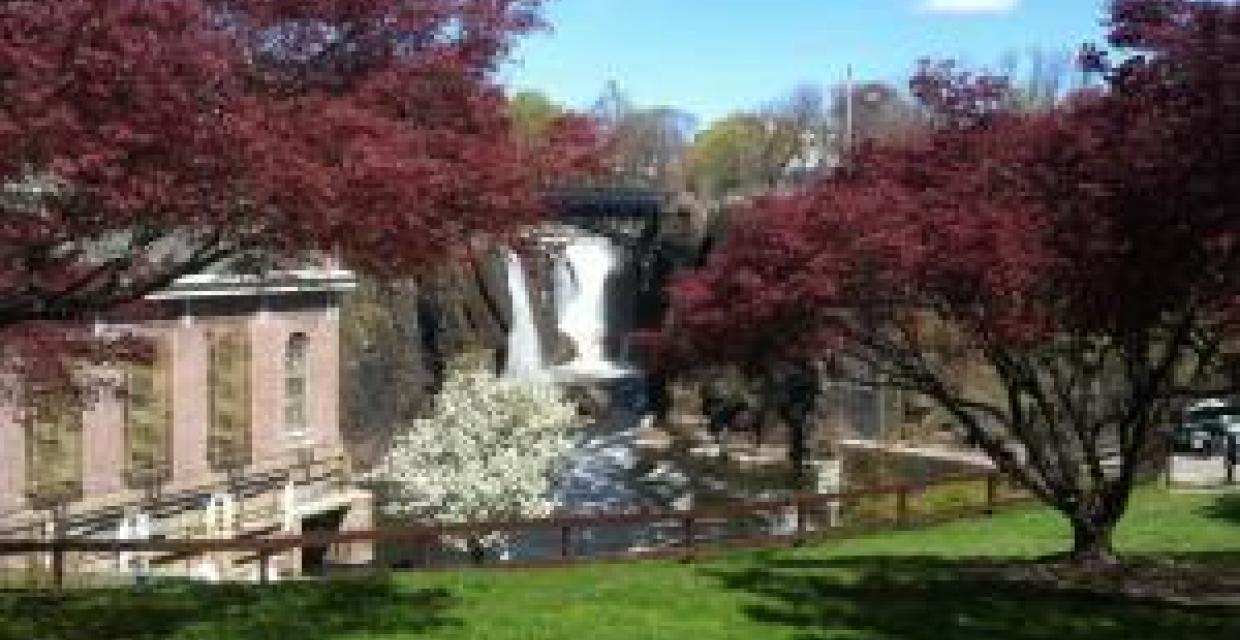 The Great Falls of the Passaic River, located in Paterson, N.J., is the site of an early, successful initiative to establish a “national manufactory” in post-revolutionary America.  As part of the Mercantilist vision of Alexander Hamilton, the country’s first Secretary of the Treasury, Paterson become America’s earliest planned industrial city with the incorporation of the Society for Establishing Useful Manufactures (S.U.M.) in 1791. The 77-foot-high Great Falls (the second highest waterfall in the East after Niagara Falls), provided water power to cotton mills through a network of narrow canals or raceways.  In 1913-14, the S.U.M. hydroelectric station was completed at the base of the falls, one of the earliest such plants in the country.  The building still stands, as do the raceways carrying water.

Over the passage of time, as cotton textiles gave way to silk, Paterson became known as “Silk City.”  The mill district that is now (partially) incorporated into the Great Falls National Historical Park also included manufacturers of Colt revolvers and some 12,000 railroad steam locomotives.

The area’s labor history is as significant as its industrial history.  Between 1880 and 1900, workers organized 140 strikes against mill owners in concerted actions intended to improve their wages and working conditions.  Historically, the most momentous strike occurred in 1913 when local silk workers walked off their jobs and fiery leaders from the radical Industrial Workers of the World union (I.W.W.) brought national attention to the workers’ struggles. The American Labor Museum at the Botto House in nearby Haledon, N.J. commemorates this transformative event in Paterson’s history.  The Paterson Museum, a partner with the National Park Service, and Lambert Castle, situated near the top of close-by Garret Mountain, both focus on Paterson’s industrial history and feature one of its principal mill owners.

There is no fee for admission to the national historical park, but local museums generally charge modest entrance fees.

The National Park Service offers Guided Introductory Tours seasonally -- it takes roughly one hour and covers one mile.  See the Park's website link in Contact Information on this site for a schedule, follow the "Plan a Visit" tab.

“Trails” largely consist of city sidewalks with uneven surfaces.  A pictorial map of the park (use Web Map link on this site)  identifies such major features as the Great Falls, mills (both standing and in ruins), the S.U.M. Hydroelectric Station, the upper, middle and lower raceways, street names (for navigation), smaller local parks, cultural centers, several public parking areas, and (important in an urban setting) public restrooms.

The self-guided Mill Mile tour starts introduces visitors to the remarkable history, geology, social and cultural importance of the area.

An on-line brochure describing the 10-stop tour – which includes a map -- is available, as is a free downloadable audio tour app (from I-Tunes and Google Play Store) and a number to call using a cell phone along the way.   The Tour is an educational project of the Hamilton Partnership for Paterson.

To complement a visit with a more woodsy hiking experience, Rifle Camp Park and Garret Mountain Reservation, two interconnected Passaic County parks just a short drive from the mill district, have a combined trail network of 13 miles on roughly 800 acres of parkland.

The Great Falls of the Passaic River, located in Paterson, N.J., is the site of an early, successful initiative to establish a “national manufactory” in post-revolutionary America.  As part of the Mercantilist vision of Alexander Hamilton, the country’s first Secretary of the Treasury, Paterson become America’s earliest planned industrial city with the incorporation of the Society for...

New Jersey Transit provides regular train service (including weekends) to Paterson on its Main Line.  Trains leave from Hoboken, but connections from New York City are available via PATH trains from World Trade Center or 33rd Street to Hoboken, or NJ Transit trains from Penn Station to Secaucus Junction. The walk from the Paterson train station to Overlook Park at the Great Falls is about 0.8 mile.