Ken Lloyd Award: Recognizes members of Trail Conference member clubs or member clubs, who have demonstrated exemplary service to trail maintenance, management, and/or trail land protection. This year,  the award was presented to: 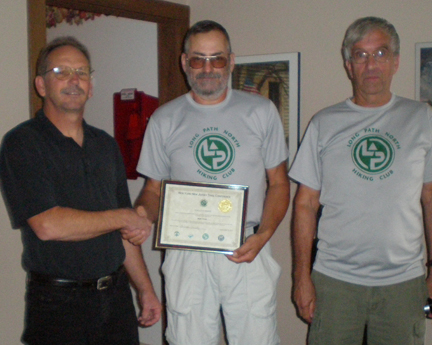 Since 2003, Mark has been club co-trail chair and maintainer (Long Path, East Windham to Mohawk Canal). He leads many hikes for his club and, as of January 1, 2012, has served as club president.

Mark has brought tremendous enthusiasm and energy to our Long Path. In the last few years Mark has been responsible for the construction of at least six foot bridges in Albany/Schoharie Counties. He designed them so they were acceptable to the landowner (DEC), and they were pre-constructed at his house, which sped up the process greatly. He organized the work groups that put the bridges in.

Mark also maintains several sections of the LP, in the Catskills and north and has built several sign-in boxes at lean-tos. At Vroman’s Nose, a popular hiking area in Schoharie County, he has improved the parking lot area with– signs, water bars, and benches. He also has worked with an Eagle Scout candidate on a Long Path kiosk on Route 30 near Vroman’s Nose. recently helped out with the possible trail location through the Plotterkill. Also one of the main hike leaders for their club. LP maintainer, East Windham to Mohawk Canal since 2003.