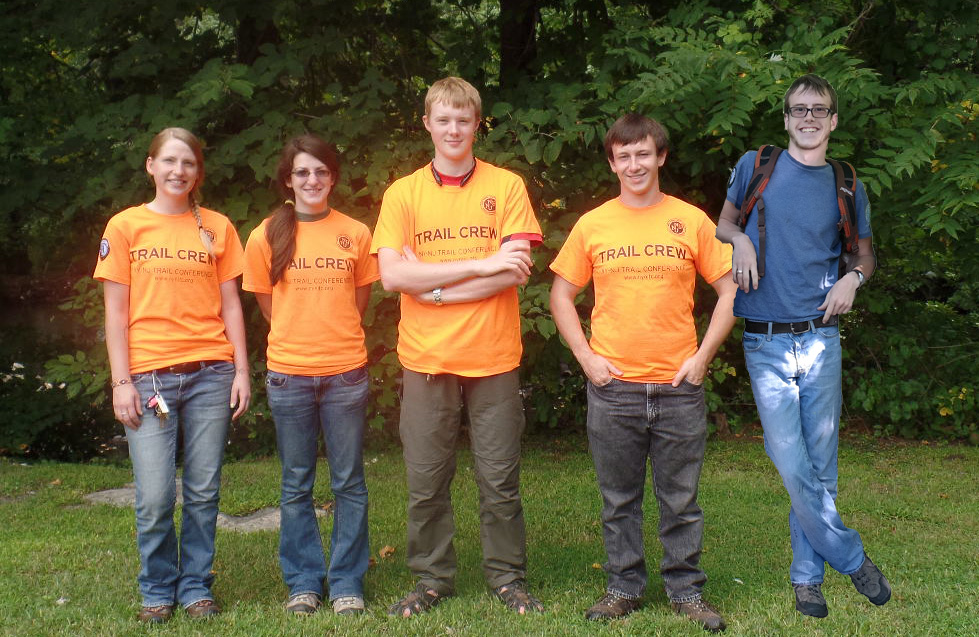 This summer the Trail Conference recruited and hosted five recent college graduates as our summer Invasives Strike Force crew. The Invasives Strike Force crew served collectively 1500 hours through Americorps on invasives surveying and removal projects throughout our region at more than 20 locations in New York and New Jersey.  Their removal work impacted over 490 acres of land.

The crew ran 8 of our volunteer work days drawing 37 individual volunteers and leveraging 520 hours of volunteer time. One of these workdays was conducted during NY State’s Invasive Species Awareness Week and the crew made special effort to talk to passers-by about invasive species during this work day. They also ran two of our ISF volunteer surveyor training sessions to train 9 new volunteers.

Our crew had opportunities to learn specialized techniques to deal with invasive species, to teach others and present their work, and to work with peers in the field to gain professional experience. Our crew partnered with other teams from NYS DEC, NY State Parks and NY City DEP to enhance the effectiveness of our combined work by conducting herbiciding that was not able to be performed by other teams.  They also performed work specifically requested by park partners including NY State Parks (OPRHP), Westchester County Parks, Westchester Land Trust, and Flat Rock Brook Nature Center.

The crew presented their work on scotch broom to the Lower Hudson PRISM Partners meeting attended by over 30 of our partners in July showing maps of surveyed populations, photographs and describing removal techniques used and habitats in which the plant was found.

The crew represented the Trail Conference at an outreach table at Ulster Co fair manning it jointly with the Catskills Invasive Species Program (CRISP), and NYS DEC and spoke about the Trail Conference, invasive species, and the Americorps program to attendees.

The crew also drafted partner reports for each park in which invasives work was performed.

In the summer of 2013, the Trail Conference Invasives Strike Force hosted 3 interns: two high school students and one college student.  One high school intern served an 8 week volunteer term during which she learned to survey for 14 different invasive plants and surveyed all the trails of Tourne County Park (over 5 miles), attended ISF Trail Crew invasive species removal work days and presented what she learned and accomplished to her classmates.

The other high school intern volunteered the entire summer during which he learned 14 different invasive plants, surveyed 14 miles of trail, became certifed as a NJ Pesticide Operator and attended several Trail Crew work days. Following his internship, he planned and ran invasive species removal events and native planting at a local park for his Eagle Scout project.

Our college student intern won a McHenry Award stipend from the Open Space Institute to work with our Invasives Strike Force program this summer and expand our efforts in the Lower Hudson Valley.  He learned to survey hiking trails for invasive species and surveyed over 50 miles of trail, taught one of our volunteer training sessions for ISF surveyors and planned and lead several ISF Trail Crew work days. He also became certified as a NJ Pesticide Operator.