This is one of the most spectacular hikes in the New Jersey-New York metropolitan area. Although it begins with a fairly strenuous 600-foot climb, the rest of the hike does not involve any major elevation changes. There are, however, many short, steep ups and downs, some of which require you to use your hands as well as your feet. The estimated time of four hours will allow you plenty of time to pause and enjoy the wonderful scenery that you'll encounter along the route.

In about three-quarters of a mile, you’ll reach an intersection with the yellow-blazed Ernest Walter Trail. Bear left and follow the yellow-blazed trail uphill. Soon, you begin to traverse a long, glacially-smoothed outcrop of Schunemunk Conglomerate “puddingstone” rock. This unusual reddish-matrix conglomerate rock – studded with pebbles of pink sandstone and white quartz – is characteristic of the Bearfort Ridge. As you climb along the rock outcrop, views open up over Greenwood Lake to the east.

Continue to the top of the outcrop, which offers a panoramic view over the six-mile-long lake, 650 vertical feet below. The hills of Sterling Forest are in the background and, on a clear day, you can see the Sterling Forest Fire Tower in the distance. You’ll want to spend some time here, taking in the magnificent view and resting from the steep climb.

When you’re ready to resume the hike, continue along the Ernest Walter Trail, which briefly dips into the woods, but soon comes out again on another long conglomerate outcrop. After passing through an area studded with pitch p 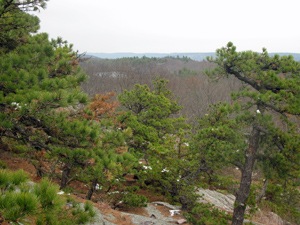 ines, with more views over Greenwood Lake, the trail bears right and descends to cross the outlet of a wetland to the right of the trail. A short distance beyond, it reaches the eastern shore of pristine, spring-fed Surprise Lake. Again, you’ll want to stop here to experience the beauty of this wilderness lake. Swimming is not permitted, however.

The yellow trail heads south from the lake, immediately reaching a junction with the green-blazed Bearfort Ridge Loop. You should bear right to continue along the Ernest Walter Trail, now coaligned with the Bearfort Ridge Loop. In a short distance, you’ll begin to pass through a dense rhododendron grove. In several places, the thick rhododendrons actually form a canopy over the trail!

After descending a little, the trail crosses Cooley Brook, the outlet of Surprise Lake, on rocks. This crossing may be difficult if the water is high. The trail now climbs to reach an east-facing viewpoint from a rock outcrop studded with pitch pines. The hills of Sterling Forest and the Wyanokie Plateau are directly ahead, with an arm of the Monksville Reservoir beyond. On a clear day, you can see the skyscrapers of Manhattan in the distance. If there are no leaves on the trees, you might be able to see Surprise Lake through the trees to the left.

Here, the green-blazed Bearfort Ridge Trail leaves to the left, but you should continue along the yellow-blazed Ernest Walter Trail, which heads west, crossing many sharp ridges of the 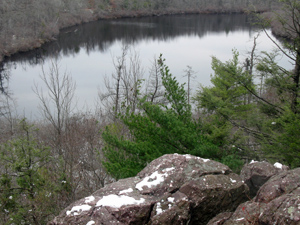 mountain. This section of trail is particularly rugged, with many short but steep ups and downs. At the bottom of the second steep descent, you’ll come to a T-intersection. Turn right, following a yellow arrow on a tree, and continue for about 150 feet to a rock outcrop overlooking pristine West Pond. You’ll want to spend a little time at this special spot, enjoying the view!

When you’re ready to continue, retrace your steps to the trail junction and continue ahead, heading west along the Ernest Walter Trail. You’ll soon come to a third, very steep descent, at the base of which the trail crosses Green Brook, the outlet stream of West Pond. The trail now proceeds through an attractive forest of hemlocks, pines and deciduous trees. Soon, you'll reach a junction with the pink-blazed West Ridge Trail, which begins on the left. Bear right at the junction to continue on the yellow-blazed Ernest Walter Trail, which now heads north, with views of West Pond through the trees to the right.

About half a mile from Green Brook, the trail crosses a small stream, the outlet of a wetland on the left. Just beyond, a rock outcrop to the left of the trail affords a view over the wetland. An unusual huge split boulder adds interest to this spot, which is another good place to take a break.

Soon, the trail traverses a long, narrow, smooth rock. A short distance beyond, it turns right and descends to end at a junction with the white-blazed Appalachian Trail (A.T.). Turn right onto the Appalachian Trail, which almost immediately climbs a steep ledge. You’re now heading east, again crossing several sharp ridges. At a seasonal viewpoint to the east, the trail turns left and heads north (when there are no leaves on the trees, Surprise Lake is visible below).

After about a third of a mile on the A.T., you’ll reach another limited seasonal viewpoint, with both east- and west-facing views from an open rock ledge. The A.T. now descends a long, sloped rock and reaches a junction with the blue-on-white-blazed State Line Trail (the junction is marked by paint blazes on a rock). Turn right and follow the State Line Trail, which crosses several ridges and then begins a steady descent. In about half a mile, you’ll reach the junction with the yellow-blazed Ernest Walter Trail that you encountered earlier in the hike. Continue along the State Line Trail, which descends steadily to the parking area on Lakeside Road where the hike began. 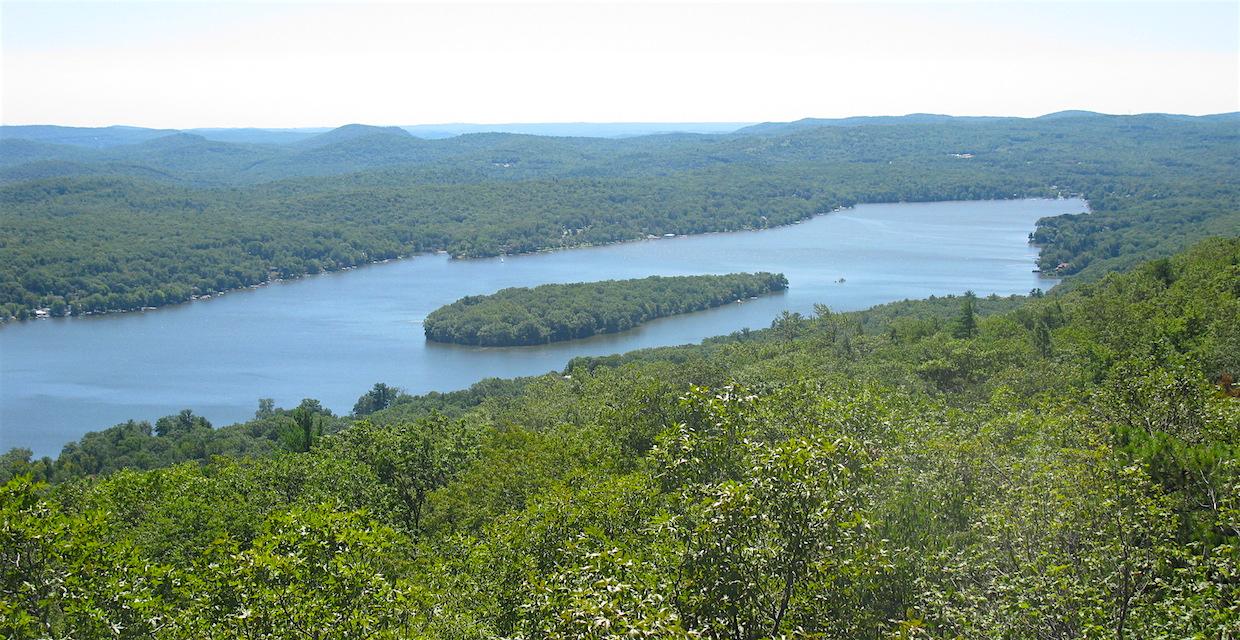 This loop hike traverses the Bearfort Ridge, with its unusual puddingstone conglomerate rock and pitch pines growing out of bedrock, reaches a panoramic viewpoint over Greenwood Lake, goes through a rhododendron tunnel, and passes Surprise Lake and West Pond.

This is one of the most spectacular hikes in the New Jersey-New York metropolitan area. Although it begins with a fairly strenuous 600-foot climb, the rest of the hike does not involve any major elevation changes. There are, however, many short, steep ups and downs, some of which require you to use your hands as well as your feet. The estimated time of four hours will allow you plenty of time...

Take the #197 NJ Transit bus from the Port Authority Bus Terminal in Manhattan.  This bus runs only about every two hours on weekends and non-rush hours, so check the schedule carefully.

rate experience
September 04, 2019
4
Great hike!
Went with my 10 year old and it was a perfect morning. Easy to follow and well maintained trail I was very impressed. We stayed on the blue and white trail when we got to the intersection rather than the yellow was mentioned above. We didn't even need a map which was great so we could better enjoy the scenery rather than worry we had wandered off trail. I would say this hike is easily closer to 5+ miles, not 4.1. We hike a lot and could just tell but totally worth it. I do not recommend dogs because there are parts where you would have to lift them up a rock face 6+ feet high. Will def do this again with friends and family.
V_Cioni
May 17, 2019
5
Great hike - recommended!
For an update, I just did this trail on May 14, 2019. I highly recommend it in nice weather. It is well marked and well maintained. Unfortunately, it was very cloudy and misty so I was not able to see all of the views, but I enjoyed it very much and look forward to going back in clear weather. It was great exercise, very quiet, surrounded by nature. It took 3 hours as there was no point in stopping to take in the views. However, I expect they would be great as I was still able to see a couple of beautiful, secluded lakes. As it is not a far drive and parking is limited, get there early or go during the week. I had to lift my 45 pound dog a couple of times, but not a big problem.
JY
December 02, 2016
5
Great bang for buck
Has a little bit of everything - Water, several GREAT views, some scrambling. First bit is a bit steep, then it levels off an is pretty great.
wbricker3
More Reviews
Log in or register to post comments