Balsam Lake Mountain, one of the 35 peaks in the Catskills over 3,500 feet in elevation, is the most westerly of these peaks. The fire tower on the summit offers a panoramic 360-degree view, and the nearby lean-to provides an opportunity for an overnight stay. This hike, which involves an elevation gain of about 1,200 feet, is suitable either as a day trip or as an overnight backpacking trip.

From the parking area, proceed north on the blue-blazed Dry Brook Ridge Trail. You’ll soon pass a trail register on the right (please sign). Follow the trail (actually, an old woods road) for 0.9 mile to a junction with the red-blazed Balsam Lake Mountain Trail (marked by a DEC sign on the left). 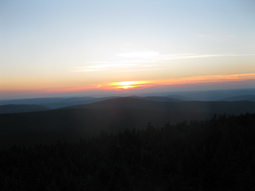 Turn left onto the Balsam Lake Mountain Trail and follow it as it steeply climbs the southern face of the mountain. You’ll be gaining about 700 feet in elevation in only half a mile. Towards the top of the climb, just before reaching the elevation of 3,500 feet, a sign points to a lean-to. Turn left and follow the side trail that leads to this lean-to, which is attractively situated, with a limited west-facing view through the trees. Even if you’re not staying overnight, the lean-to offers a nice place to rest from the arduous climb.

When you’re ready to continue, return to the main trail and turn left to resume your climb. Just ahead, you’ll pass the sign that marks the 3,500-foot elevation, and then you’ll climb a very steep section, with rock steps. At the top, there is a pipe spring on the right, which is a reliable source of water. Beyond the spring, the trail continues to climb, but it soon levels off.

After climbing a little more, you’ll come to a junction with the yellow-blazed Mill Brook Ridge Trail, which begins on the left. Continue ahead on the red-blazed Balsam Lake Mountain Trail, which passes through a spruce-fir forest, typical of high elevations in the Catskills. Soon, you’ll emerge onto a clearing, the site of the 47-foot-high Balsam Lake Mountain Fire Tower. 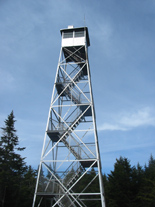 Built in 1930, the fire tower was abandoned in 1988 and fell into disrepair. It was restored and reopened to the public in 2000. The tower is staffed by volunteers on weekends in the summer. At other times, the cabin at the top of the tower is locked, but the tower remains open, and one can climb to the top landing, where there is a panoramic 360-degree view.

After climbing the tower and enjoying the view, continue ahead on the red-blazed Balsam Lake Mountain Trail, which passes the observer’s cabin and begins a steady descent, rather steeply in places. The trail follows the former jeep road used to access the tower, but the road is no longer open to any vehicles and has narrowed to a footpath.

At the base of the descent, the Balsam Lake Mountain Trail goes around a gate and ends at a junction with the blue-blazed Dry Brook Ridge Trail. Turn right and follow this trail for about two miles back to the parking lot where the hike began. Although it has narrowed to a footpath (and the footing is often quite rocky), this trail follows the route of a former woods road, and substantial stone embankments are visible along the way on the left. After a while, there are views down into the valley below on the left. In about a mile, you’ll reach the junction with the southern end of the Balsam Lake Mountain Trail; from this point on, you’ll be retracing the route that you followed at the start of the hike. This loop hike climbs to the fire tower atop Balsam Lake Mountain, with panoramic views.

Balsam Lake Mountain, one of the 35 peaks in the Catskills over 3,500 feet in elevation, is the most westerly of these peaks. The fire tower on the summit offers a panoramic 360-degree view, and the nearby lean-to provides an opportunity for an overnight stay. This hike, which involves an elevation gain of about 1,200 feet, is...

Take N.J. Route 17 north to the New York State Thruway, and head north on the Thruway to Exit 16. Continue on N.Y. Route 17 West for about 62 miles, and get off at Exit 96 (Livingston Manor). At the end of the ramp, turn right onto Debruce Road (County Route 81), and in 0.4 mile, turn right onto County Route 178 (Old Route 17). In 1.3 miles, bear right onto Beaver Kill Road (County Route 151) and continue for about 11 miles to Turnwood (along the way, the road becomes known as Turnwood Road and the route number changes, first to County Route 152 and then to County Route 54). When you reach Turnwood (marked by signs), continue ahead on Beaver Kill Road (do not turn left onto Alder Creek Road). Proceed for 6.3 miles on this little-used, dead-end road to its terminus at the entrance to the private Balsam Lake Club. Bear right at the DEC sign and park in the parking area above the road. (Note: The last mile of this road is not maintained in the winter, and the entire road can be very treacherous when covered with snow and ice. During the winter, it is recommended that Balsam Lake Mountain be accessed from its northern trailhead on Mill Brook Road.)

rate experience
October 15, 2020
4
Short but intense
The climb to the tower is steep but only about a half mile. The views from the top of the fire tower are the best I've ever experienced and I've done quite a few hikes and been on a few fire towers. The remainder the hike after the tower is about half downhill and then half relatively level but there are no more uphills.
rdgee65
October 18, 2017
5
Good hike, great views on tower
This is a nice quickie that can be done in about 2 and a half to 3 hours. Fire tower is in great condition and views from the landing are great. The red trail is a bit tricky during fall, though. The blazes are spotty and unless you can see the trail its a bit of guesswork. Make sure to bring offline copies of maps or guides. This hike is so far into the boonies it is jarring. About 16 miles from the trailhead is where the signal ends/starts.
bromli
November 18, 2014
0
Thanks for the quick response
<p>Thanks for the quick response Jeremy.</p>
bennett.t.shields
More Reviews
Log in or register to post comments