From the parking area, head back along the entrance road for about 0.1 mile, passing the park maintenance center (a former garage) on the right. At a sign for the Beacon Hill Carriage Road, turn right and follow this gravel road, marked with black-"B"-on-orange-diamond blazes, as it descends gently through an attractive forest of hemlock, pine and mountain laurel.

In about half a mile, you'll reach the turnaround at the end of the road. Here, a rock ledge affords a panoramic 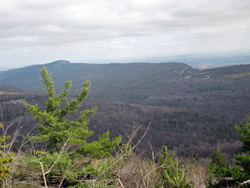 east-facing view. The closest mountain is Dickie Barre, with the Peters Kill park office at its base. The Sky Top tower at Mohonk is in the background, and long ridge to its right is The Trapps. The Village of New Paltz may be seen through the narrow notch between The Trapps and Millbrook Mountain, and the Catskills are visible in the distance on the left.

After taking in the view, find the triple-yellow blaze that marks the start of the Beacon Hill Trail, and follow this trail into the woods. The trail descends slightly to cross a stream, then begins a steady ascent, passing a rock ledge with a limited view. It continues through the woods, climbing gradually. After a steeper climb, it comes out on another rock ledge, with panoramic views over Dickie Barre, Sky Top and The Trapps.

The trail continues along rock outcrops, with more east-facing views. This is one of the most spectacular trail sections in the Shawangunks, and you'll want to take your time traversing it. After a while, the trail reenters the woods, with only limited views through the trees. It descends through a cleft in the rock, passes a cliff on the right, then bears 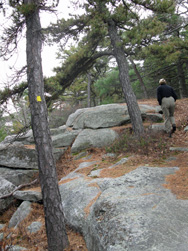 left and crosses a stream.

After passing more cliffs on the right, the Beacon Hill Trail climbs rather steeply, then levels off and ends at a grassy picnic area (formerly a ball field). To the left, an unmarked path leads to another spectacular east-facing viewpoint from a rock ledge. Cross the picnic area and turn left onto a gravel road -- the red-diamond-blazed Lake Minnewaska Carriage Road, which circles Lake Minnewaska. At the next T-intersection, turn left and follow the road as it descends towards the southern tip of the lake. Along the way, there is another panoramic east-facing view from a rock ledge to the left of the trail.

After passing a side road that goes off to the right, you'll reach a sign that marks the start of the Millbrook Mountain Path. Continue ahead on the carriage road, which crosses the outlet of the lake and begins to climb on a switchback. You'll pass, on the left, the start of the yellow-blazed Millbrook Mountain Carriage Road and then (in another third of a mile) the blue-blazed Castle Point Carriage Road. Just beyond the latter junction, a rock outcrop on the right affords a good view of the cliffs across the lake - the former site of the Cliff House hotel.

Bear right at the next intersection and follow the Lake Minnewaska Carriage Road down to a junction, where the green-blazed Upper Awosting Carriage Road begins on the left, and a seasonal swimming area is on the right. Continue ahead (following the sign to the parking lot) and climb to a viewpoint over the lake, then turn left and follow the path to the parking area where the hike began. 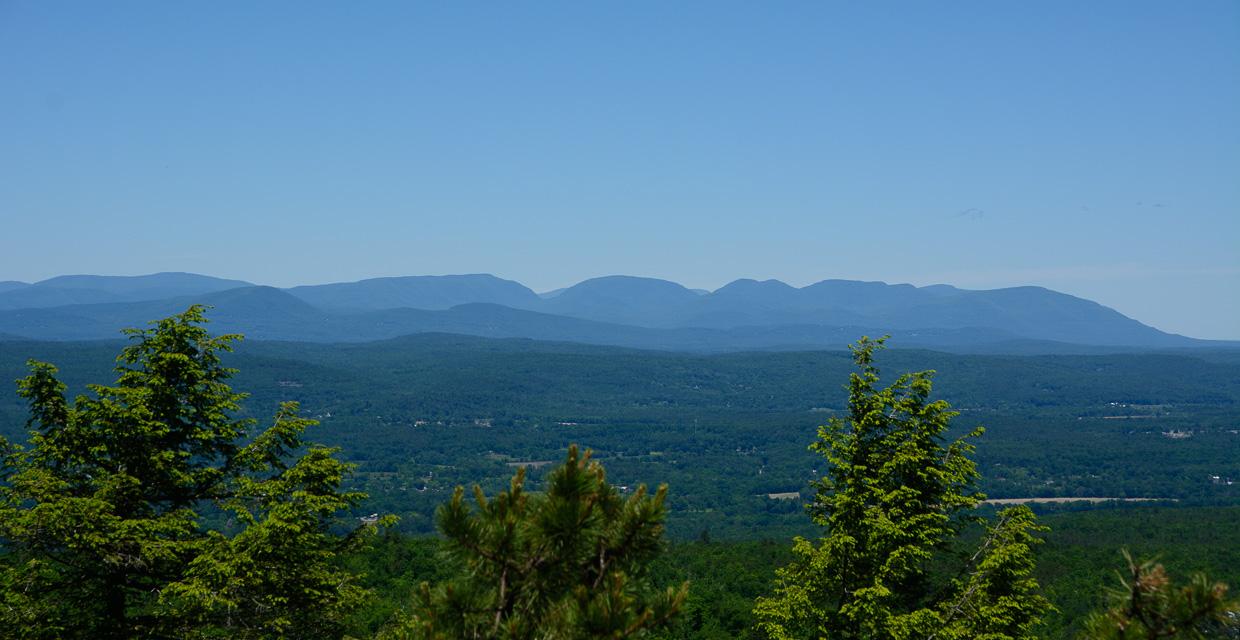 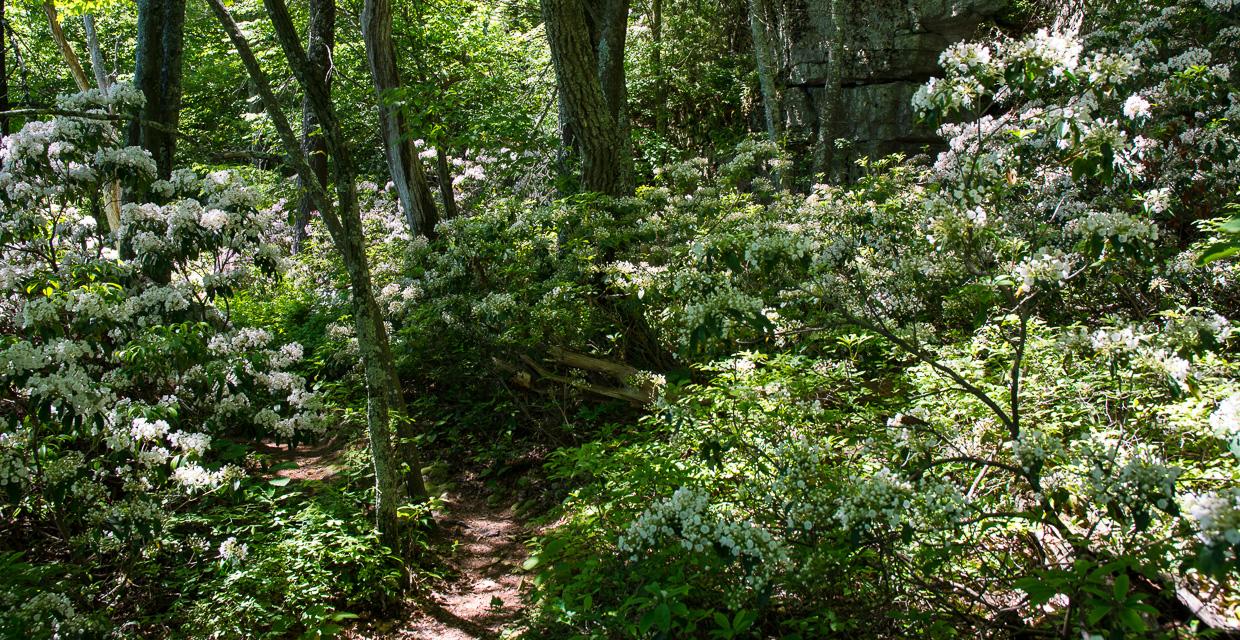 This hike loops around Beacon Hill and Lake Minnewaska, with many panoramic views.

From the parking area, head back along the entrance road for about 0.1 mile, passing the park maintenance center (a former garage) on the right. At a sign for the Beacon Hill Carriage Road, turn right and follow this gravel road, marked with black-"B"-on-orange-diamond blazes, as it descends gently through an attractive forest of hemlock, pine and mountain laurel.

Take the New York State Thruway to Exit 18 (New Paltz). After paying the toll, turn left onto Route 299 and continue west through the Village of New Paltz. When you cross the bridge over the Wallkill River at the west end of the village, continue ahead on Route 299 (do not turn right towards the Mohonk Mountain House). In another 5.6 miles (from the Wallkill River bridge), Route 299 ends at a T intersection with Route 44/55. Turn right and follow Route 44/55 as it negotiates a very sharp hairpin turn and climbs to pass under the Trapps Bridge (a steel overpass). Continue for about three miles past the Trapps Bridge to the entrance to Minnewaska State Park Preserve, on the left side of the road. A $10 parking fee is charged at the gatehouse per vehicle. Turn left just past the gatehouse and continue uphill for 0.4 mile to the parking area at Lake Minnewaska.

rate experience
October 17, 2015
0
Great for fall foliage but crowded
<p>The gunks are my all time favorite place to go leaf peeping! I think a lot of people agree with me, because it was very, very crowded. It was like hiking in rush hour traffic! Definitely a place to try to visit on a weekday during leaf peeping season if you can.</p> <p>&nbsp;</p> <p>Some photos:</p> <p><a href="http://agiletrekker.blogspot.com/2015/10/beacon-hill-and-lake-minnewaska-easy.html">http://agiletrekker.blogspot.com/2015/10/beacon-hill-and-lake-minnewaska-easy.html</a></p>
TrekkerHikes
Log in or register to post comments