Cross Route 9W (use caution when crossing this very busy highway) and enter the woods on the south side of the stream, following the blue blazes of the Cornell Mine Trail. The trail heads uphill on a footpath, climbing rather steeply, then levels off. It soon begins to climb again, with cascades visible in the stream below to the right. After bearing left, away from the stream, the trail levels off. For the next half mile, the trail is generally uphill, with a few minor dips and level sections.

After about half an hour of hiking, you’ll notice the huge, massive Bald Mountain directly ahead of you. The summit of this mountain is your destination! A short, level stretch follows, but the trail soon begins a steep, unrelenting climb up the mountain. To ease the grade somewhat, the trail follows switchbacks for the first part of the climb and an old woods road for the latter part, but you’ll be climbing a vertical distance of 500 feet in less than half a mile.

Near the top, the Cornell Mine Trail ends at a junction with the red-dot-on-white-blazed Ramapo-Dunderberg Trail. The small pit at the junction is a remnant of the Cornell Mine. Turn right onto the Ramapo-Dunderberg Trail and continue climbing, now somewhat more gently. Finally, you’ll reach the summit of Bald Mountain (elevation 1,080 feet), where the trail bends sharply left. Continue strraight ahead on an unmarked path to reach the summit. You’ve climbed more than 1,000 vertical feet from the start of the

hike, and this is a good place to take a well-deserved break.

The summit affords fine views over the entire area, but the best views are from the open rocks straight ahead (just north of the actual summit). The wide panorama includes Iona Island, Anthony’s Nose and the Bear Mountain Bridge to the northeast, Bear Mountain (with the Perkins Memorial Tower on its summit) to the northwest, and West Mountain to the west.

When you’re ready to continue, return to the red-dot-on-white trail and bear right, now heading south. (Make sure you don’t retrace your steps, as the trail routes leading to and from the summit closely parallel each other!) The trail makes a short, steep descent, levels off and passes a south-facing viewpoint, then begins a steady descent. After climbing briefly, it descends gradually through dense mountain laurel to reach an old stone fireplace along a stream.

Proceed ahead, following the red-dot-on-white blazes, which cross the stream, bear left from a woods road, and continue over two low hills. At the top of the second hill, there is a view back over Bald Mountain from a rock outcrop. The trail now descends to a grassy woods road, the route of the 1777 Trail (which marks the route followed by British troops under Sir Henry Clinton on October 6, 1777, on their way to attack Forts Clinton and Montgomery). The 1777 Trail is marked with white circular blazes with a red “1777.”

Turn right and follow the 1777 Trail, which proceeds steadily downhill, but on a much gentler grade than the Cornell Mine Trail, which you followed up to the summit. After a while, the woods road followed by the trail becomes rather eroded. To the right, through the trees, you can see Bald Mountain, which you just climbed!

After about half a mile, the trail levels off and crosses a stream. To the right, stone foundations and a trail shelter may be seen. These are the remnants of a camp once operated by Riverside Church of New York City. Continue ahead on the woods road, now proceeding through the former settlement of Doodletown, which thrived for two centuries until it was acquired by the park about 1960. Soon, you’ll notice several white markers that show the locations of former homes. From here on, the road is paved, although much of the paving has disintegrated, as the road has been closed to traffic for over 50 years.

Continue following the 1777 Trail along the road, known as Pleasant Valley Road, passing the remnants of many homes and other features of interest, which are commemorated by markers. For a detailed history of each of these sites, you may wish to consult “Doodletown: Hiking Through History in a Vanished Hamlet on the Hudson,” by Elizabeth “

Perk” Stalter, a former resident of the village (this book is available from the Park bookstore). After about a mile, the 1777 Trail divides into the 1777W Trail, which leaves to the left, and the 1777E Trail, which continues ahead on the road. Proceed ahead, now following the 1777E blazes.

Soon you’ll reach a T-intersection, where Pleasant Valley Road ends. Turn right, now following Doodletown Road. Bear left at the next intersection and go around the Doodletown Reservoir (built in 1957). Continue ahead at the following intersection, where Lemmon Road leaves to the left. A short distance beyond, after passing the stone walls of a former garage on the left, you’ll notice a marker to the right. Here, a woods road (part of the Doodletown Bridle Path) leads down to a waterfall in the stream. Just ahead, the 1777E Trail leaves to the left, but you should continue along the road (now unmarked), which begins a steady descent.

Soon, the blue-blazed Cornell Mine Trail joins from the left. Continue to follow the road downhill as it makes a sharp right turn and narrows to a footpath. After descending wooden steps, the trail ends at Route 9W, just north of the parking area where the hike began. 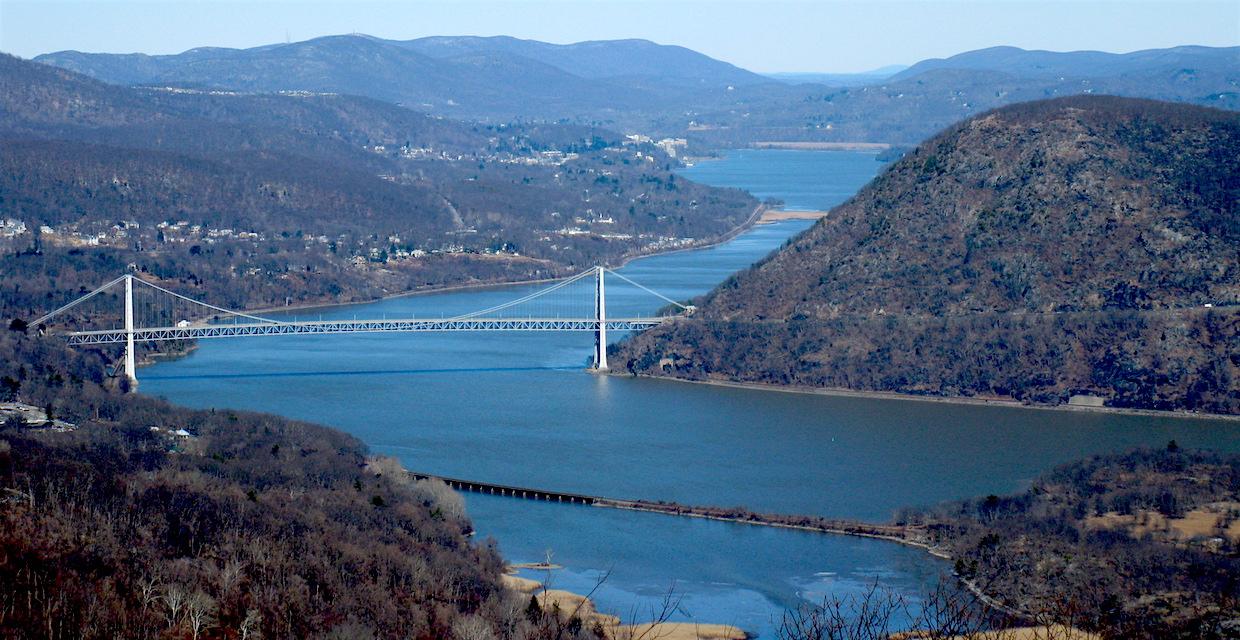 This loop hike steeply climbs to a panoramic viewpoint atop Bald Mountain and descends on old woods roads through the historic former settlement of Doodletown.

Cross Route 9W (use caution when crossing this very busy highway) and enter the woods on the south side of the stream, following the blue blazes of the Cornell Mine Trail. The trail heads uphill on a footpath, climbing rather steeply, then levels off. It soon begins to climb again, with cascades visible in the stream below to the right. After...

Take the Palisades Interstate Parkway to its terminus at the Bear Mountain Circle. Continue south on Route 9W for 1.3 miles to a small hikers’ trailhead parking area on the left side of the road, just past a concrete bridge over a stream.

rate experience
July 01, 2019
4
Good hike
took the hike with my 8 yr old, first half is fairly continuous uphill climb about 2 miles uphill to the summit hence the strenuous rating, rest is fairly downhill, downhill is not as taxing as the uphill climb but has its own challenges as not to get sloppy with your footing, good hike for anyone that wants more than a flat terrain hike took us 4 hrs total, that included lunch break at the summit and quite a few water/rest stops along the way bring extra water wouldn't recommend as a 1st hike for young kids, but fine for most average kids
Terasec
June 10, 2019
5
Great Hike
We took the "Bald Mountain, The Timp, and Doodletown" hike from "Circuit Hikes in Harriman", which is the hike described here, with detour to include the Timp, which adds about a mile to the length. It was a cool, sunny day, and the views from Bald Mountain and the Timp were wonderful, but almost the entire hike was through lovely terrain. Beyond the steep climb to the first summit, it was taxing because large sections of the trail were very rocky. The written directions were excellent, and we would probably have gotten lost a couple of times without them.
pollard.tom
July 22, 2018
5
Pleasant hike
Hiked in the morning of 7/22/18. Took 2.5hrs to complete. First of all, I wanted to say big thank you to mr Chazin and his team for very detailed and accurate directions. Blue and red-dot-on-white blazes are marked very well and so are 1777 for the most part. Only the first 1/3 of the hike is challenging with constant climbing to the summit of Bald Mountain. But the views are rewarding and totally worth the effort. The remaining parts of this hike take your through remnants of Doodletown. The trailhead has a free parking and can accommodate about 5-6 cars.
mike.burkov
More Reviews
Log in or register to post comments