From the parking area, climb stone steps to the road. Cross the road (just before the gate), and you will see a yellow blaze of the Stillman Trail and a teal diamond blaze of the Highlands Trail. Enter the woods and follow the yellow-blazed trail uphill (although you will be following both trails, only yellow blazes mark the route for most of the way). The trail follows a winding path up Whitehorse Mountain, climbing gradually at first, then more steeply.
As you near the top of the climb, there is a limited view to the northwest through the trees. On a clear day, you can see the Shawangunk and Catskill Mountains in the distance. After a short level section, the trail climbs gently to the first summit of the mountain. It descends a little, climbs to a second summit, then begins a steady descent. On the way down, it joins a woods road which comes in from the left.
Soon, the Upper Reservoir of Black Rock Forest is visible ahead through the trees. The trail curves to the right and skirts the edge of the reservoir, crossing the boundary of Black Rock Forest. After passing the spillway of the reservoir to the left, the Stillman Trail reaches the gravel Reservoir Road. Here, the yellow blazes turn right, but you should turn left, leaving the Stillman Trail, and follow the gravel road. The road curves to the right and soon reaches a T-intersection marked by a small wooden shack.
Turn left here and follow a lesser-used woods road along the shore of the reservoir. This road is also the route of a gas pipeline, marked by yellow posts. When you reach the end of the reservoir, continue ahead on the road/pipeline (do not follow a road that goes off to the left).
Soon, you will see a triple-blue blaze on a tree to the right. This marks the start of the blue-blazed Swamp Trail. Turn right and follow this trail. In a short distance, you’ll reach a fork. Here, the white-blazed Hill of Pines Trail goes off to the left, but you should bear right and continue along the blue-blazed Swamp Trail, which follows a woods road. It first parallels a stone wall to the right, then crosses several stone walls.
In about a quarter of a mile, the white-blazed Scenic Trail crosses (this intersection is marked by a large cairn). Turn left onto the Scenic Trail and begin a steady climb of the Hill of Pines, passing through attractive mountain laurel and hemlock. 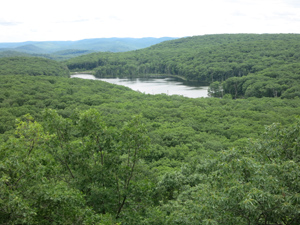 At the top of the climb, the trail comes out on open rocks, with a panoramic view. Looking west, Black Rock Mountain may be seen to the right, and the Black Rock Forest fire tower is to the left. (Despite the name “Hill of Pines,” there are only two pine trees near the summit, which is mostly covered with oaks). You’ll want to spend some time at this magnificent vantage point.
The Scenic Trail now descends the hill, passing interesting lichen-covered rocks on the way down. It climbs ov
er a small rise and soon crosses the dirt Carpenter Road diagonally to the right. It now begins a gradual climb of Rattlesnake Hill. After about ten minutes, you’ll reach a viewpoint to the right of the trail (the best view is from a rock ledge adjacent to a large pine tree). The fire tower may be seen straight ahead, and Bog Meadow Pond is to the left. After a short but steep descent and a relatively level strecth, you’ll reach a second viewpoint – this one marked by a gnarled, nearly horizontal pine tree.  Continue ahead through a dense mountain laurel thicket to the third viewpoint on Rattlesnake Hill – marked by two pine trees amid the oaks – which offers a panoramic south-facing view from open rocks. Bog Meadow Pond is directly below, with the rolling hills of Orange County beyond.
After pausing to enjoy the view, continue ahead on the white trail, which begins to descend, first steeply, then more gradually. The trail briefly runs along the southern boundary of Black Rock Forest, with Bog Meadow Pond visible through the trees to the left. After crossing the inlet stream of the pond, the trail reaches the dirt Bog Meadow Road. Here, the white-blazed Scenic Trail turns left, but you should turn right and follow the road. A short distance ahead, Carpenter Road leaves to the right, but you should continue ahead on Bog Meadow Road, which begins a steady descent.
At the base of the descent, you’ll reach a T-intersection with White Oak Road. Turn right onto White Oak Road, which offers views of Aleck Meadow Reservoir through the trees to the left. Soon, the blue-blazed Swamp Trail begins to the right, and a gated side road goes off to the left. Just beyond, the yellow-blazed Stillman Trail (also the route of the teal-diamond-blazed Highlands Trail) crosses, but you should continue ahead on White Oak Road.
After passing between Honey Hill (to the left) and Mt. Misery (to the right), White Oak Road begins a steady descent and curves sharply to the right. At the end of the curve, the yellow-blazed Stillman Trail crosses (for the second time). Turn left, leaving White Oak Road, and descend rather steeply, following the yellow blazes.
When the yellow-blazed trail turns right to cross a stream, continue ahead along the left side of the stream (do not cross it). You’re now following the blue blazes of the Reservoir Trail, which descends alongside this picturesque stream, with cascades and waterfalls. At the base of the descent, the trail makes a sharp turn and soon crosses the stream on Ben’s Bridge.
Just beyond the bridge, you’ll reach a gravel road. The blue-blazed Reservoir Trail turns left onto the road, but you should cross the road and continue straight ahead on the red-blazed Duggan Trail. Follow the Duggan Trail gently uphill to its end at the parking area where the hike began.
Publication: Submitted by Daniel Chazin on 09/08/2006 41.41857, -74.01014
From the parking area, climb stone steps to the road. Cross the road (just before the gate), and you will see a yellow blaze of the Stillman Trail and a teal diamond blaze of the Highlands Trail. Enter the woods and follow the yellow-blazed trail uphill (although you will be following both trails, only yellow blazes mark the route for most of the way). The trail follows a winding path up...
0
rate experience
Orange Co., NY
6 mi
4 hrs
Read full description

Take the Palisades Interstate Parkway to its northern terminus at the Bear Mountain Bridge and continue north on US 9W for 8.8 miles. About half a mile after passing a parking area marked with a blue sign, turn right onto Mountain Road. Immediately, turn right again and proceed through a very narrow underpass beneath US 9W (large vehicles may not fit in this underpass). Continue ahead for 0.2 mile to a parking area on the right side of the road, just before a gate.