This hike follows the northern section of the Blue Mountain Loop Trail, blazed with a blue dot on white. This trail, constructed by the park in the summer of 2015, incorporates a number of pre-existing trails. 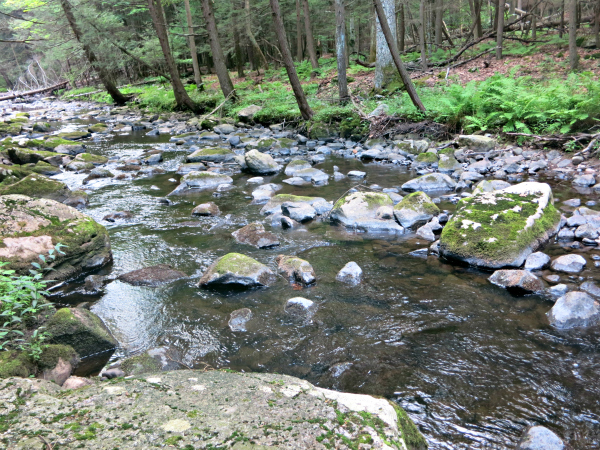 From the parking area, head east on the blue-dot-on-white-blazed Blue Mountain Loop Trail, which parallels the Big Flat Brook. In 0.2 mile, you'll reach the start of the yellow-blazed Tinsley Trail. Turn right onto the Tinsley Trail, which follows a woods road. Several marked trails formerly maintained by the New Jersey State School of Conservation branch off to the left, and one of these trails (the Purple Finch Trail) is co-aligned with the Tinsley Trail for some distance.

After descending to a wetland, the Tinsley Trail begins a gradual climb. About half a mile from its start, you’ll reach a fork, where you should bear right to continue along the Tinsley Trail. The trail now levels off, but it soon resumes its climb.

In a third of a mile, you’ll reach an open area with a locked cabin and an adjacent picnic table. Continue ahead on the Blue Mountain Trail, which follows a level woods road. In about half a mile, after crossing several branches of a stream, follow the Blue Mountain Loop Trail as it turns right, leaving the woods road.

The Blue Mountain Loop Trail climbs on a footpath, paralleling a stream on the left. After crossing the stream on rocks, the trail levels off. Soon, it crosses another stream and continues through a dense understory of ferns. It then climbs a little more to cross the paved Sunrise Mountain Road. The climb steepens on the other side of the road, and, in a short distance, the trail reaches a panoramic west-facing viewpoint from an open rock ledge, with several pine trees. This is a good spot to take a break. 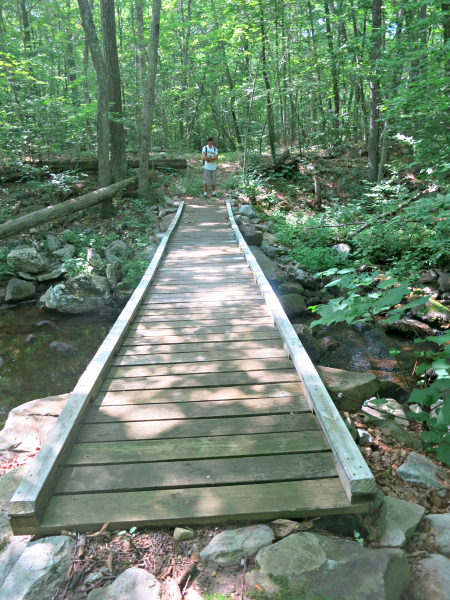 After climbing a little more, you’ll come to another junction. Here, the Cartwright Trail (as well as a side trail with black/blue blazes) begins, but you should turn left, continuing to follow the blue-dot-on-white blazes of the Blue Mountain Loop Trail. Soon, you’ll come to another west-facing viewpoint from an open rock ledge.

The Blue Mountain Loop Trail now descends gently. In about a mile, it crosses a few short wooden bridges and then a longer bridge over the Big Flat Brook. It continues to descend a little, but after crossing a stream on rocks, the trail begins to climb. After leveling off, the trail descends gradually, then  crosses a wet area on puncheons. Soon, it reaches a grassy woods road -– the route of the blue-blazed Parker Trail.

Turn left onto the road, which descends gradually. In about half a mile, follow the blue-dot-on-whte blazes as they turn left, leaving the road, and descend on a footpath.

Soon, you’ll reach the paved Crigger Road, with a piped spring on the opposite side of the road. Turn left onto the paved road, continuing to follow the blue-on-white blazes of the Blue Mountain Loop Trail. The trail crosses the Big Flat Brook on the road bridge, then turns right, leaving the paved road, and continues on a footpath.

For the next two miles, the trail proceeds through a hemlock forest, closely paralleling the cascading Big Flat Brook. This is the most interesting and beautiful portion of the hike, and you’ll want to take your time to enjoy this trail section.

After about 1.2 miles of pleasant walking along the brook, you’ll traverse an open grassy area, with a fenced-in area on the left. A short distance beyond, the Blue Mountain Loop Trail turns right and crosses an impressive wooden footbridge over the outlet of Lake Wapalanne. Just beyond, you’ll pass the ruins of a stone fireplace, and the Brown Creeper Trail joins from the left.

A short distance beyond, the yellow-blazed Tinsley Trail begins on the left. Continue ahead on the Blue Mountain Loop Trail until you reach the parking area where the hike began. This hike loops around the northern section of Stokes State Forest, climbing to two panoramic viewpoints and paralleling the scenic Big Flat Brook.

This hike follows the northern section of the Blue Mountain Loop Trail, blazed with a blue dot on white. This trail, constructed by the park in the summer of 2015, incorporates a number of pre-existing trails.

Take I-80 to Exit 34B and continue north on NJ 15 for about 17 miles. When NJ 15 ends, continue ahead on US 206 North for 8.6 miles and turn right onto Flatbrook Road. In 1.0 mile, turn sharply right to continue on Flatbrook Road. Continue for another 2.4 miles and turn right onto Skellenger Road. Proceed ahead for another 0.4 mile. After crossing a stone-faced bridge over the Big Flat Brook, the road ahead is gated. Park along the shoulder of the road.

rate experience
April 07, 2020
5
Beautiful hike
This is a great loop with lots of variety - views, lots of stream crossings, wetlands, and a beautiful 2 mile section by the brook under evergreens.
STINTEA
December 17, 2019
0
Updated maps are definitely suggested!

I'm glad you had an enjoyable hike!  And I would definitely agree that the final stretch of this hike along the Big Flat Brook is beautiful, as I have visited that section several times through the years and also enjoy the peacefulness of those woods.

We would certainly suggest trying to keep up with the latest maps for parks in our area.  People are often surprised just how often trails can change, and we try to keep most of our maps updated on a 3-4 year cycle to keep up with the latest changes.  In this case, our Kittatinny Trails map set was revised in 2016, and especially for the Stokes State Forest area, it was a significant update that included these blaze changes related to the Blue Mountain Loop Trail.  We are currently working on a revision to the maps that will come out in 2020, and any additional blaze and trail changes in this area (such as sections that have old blazes removed, as you mentioned above) will be incorporated into this map update.  I've also taken a close look at the description, and for the 2nd issue you mentioned regarding the Cartwright Trail, the right turn off the red Swanson Trail is noted a couple paragraphs above the part you mentioned.  The left turn after the panoramic viewpoint is correctly described.

Jeremy Apgar
December 16, 2019
4
2012 map useless
This was a tough hike to follow made worse by my outdated trail map. The 1st issue was at the outset where the description says "turn left at the next junction" to the Blue Mt. Loop Trail from the Tinsley trail. You have to watch carefully because it's a sudden left turn to pick up the BMLT otherwise you will continue to follow the joint Tinsley / BMLT in the wrong direction. The next issue in the hike description is at the Cartwright Trail. The description says turn left to continue following the blue on white blazes of the BMLT but the joint trails split here and the red blazes continue straight. You must turn right uphill along the stream to follow the blue on white blazes. Lastly, where the description states the grey on white blazes of the Howell Trail join from the left after turning off the eroded woods rd, that is a black dot on blue trail head now that does not join the BMLT. All the grey on white blazes have been removed until you get to the long bridge over the Big Flat Brook. Luckily the description states to follow the blue on white blazed BMLT for the entire hike , until picking up the the Tinsley again at the end. I probably would have taken some wrong trails based on my old map. All in all this is a very nice hike and Stokes is a beautiful park. The finale, along Big Flat Brook after crossing Crigger Rd, is one of the most scenic, tranquil stretches of trail you will ever hike.
rdgee65
More Reviews
Log in or register to post comments